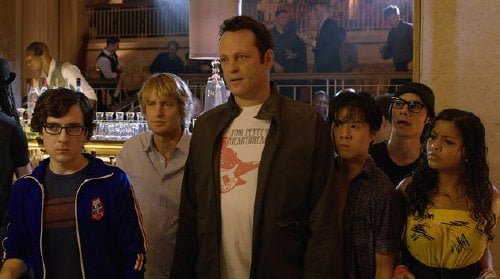 Billy (Vince Vaughn) and Nick (Owen Wilson) are too young to retire, but new technology has overtaken their old-fashioned sales jobs. Deciding that if you can't beat them you may as well join them, the two find themselves outclassed with younger, savvier techies at Google, where they've both improbably procured something highly desirable - "The Internship."

After 2005's "Wedding Crashers," there's been talk of reteaming its stars. Now Vaughn ("Couples Retreat") along with "The Watch's" Jared Stern has written them a vehicle that's overstuffed, formulaic and dated right out of the gate. But it's also got a real feel good factor and, ironically, will be a calling card for its young, mostly unknown supporting players. These old dudes crashing into a foreign youth culture are more fun to spend time with than the hipper guys fooling around in next week's comedy release. The film begins with too much extraneous setup as Billy and Nick learn they've lost their jobs from a client. Nick accepts his downsized prospects by taking a job at Sleep 'n Snore with his sister's lecherous boyfriend Kevin (Will Ferrell, amusing), but Billy has a revelation using Google on his job search. After a hilariously inept Skype interview, the boys squeak in when 23 year-old intern team manager Lile (Josh Brener) points out that Google values diversity and these guys think differently than the usual employee. Google, of course, is one of the film's 'stars' and when the lads arrive on campus it's as if they've entered Disneyland reimagined by Dr. Seuss. Primary colors, circular group bicycles, multi-level chutes and nap pods all appeal to Billy and Nick's arrested developments. But they fail to make a good impression on the head of Google's internship program, Mr. Chetty (asset Aasif Mandvi, "Premium Rush") when they fail to discern corporate culture. They're also kicked to the curb by Graham (Max Minghella, "The Social Network," one note), a disdainful snob and so when the group is asked to form teams they end up in Lile's group of misfits. There are five challenges the teams must go through and, as expected, while they at first fail miserably, Billy and Nick know things that the kids do not, namely how to work together. Each of the other members - Yo-Yo Santos (Tophit Raphael), Neha Patel (Tiya Sircar) and Stuart Twombly (Dylan O'Brien, TV's 'Teen Wolf') have their teachable moments from the guys and damned if they aren't all kind of sweet. Billy's nonjudgmental nature also gives him an edge when he gets the attention of Headphones (Josh Gad, "Love & Other Drugs," terrific), a super coder nobody talks to. There are also romances (forbidden at the onset, but that seems to get lost in the shuffle), one for Nick with a workaholic executive (Rose Byrne, "Bridesmaids"), another for Lile with dance instructor Marielena (Jessica Szohr, TV's 'Gossip Girl'), a brewing bromance for Billy and Chetty. If only the filmmakers (Shawn Levy, "Real Steel," directed) hadn't relied too often on nonsensical ignorance as comedy. It's cringe worthy when Billy keeps saying 'on the line' and neither recognize hugely popular movie references, but they get savvier (i.e., more acceptably incompetent) as things go forward. There's also a reliance on stale horndog jokes, especially in the formulaic third act obstacle Billy faces (with the aptly named Randy). But there's more good than bad here. Neha's obsession with sex (she likes tentacle erotica!) is a cover for inexperience. Yo-Yo self-castigates by pulling out eyebrow hairs because of his mom's (Chuti Tiu, distilling the essence of Tiger Mom in 2 seconds) driving ambition. A team trip to a strip club opens and Wilson and Byrne's date go to some unexpected places. Just like Billy and Nick, Vaughn and Wilson's generosity allowing others to shine provides "The Internship" a basis for comedy sprung from genuine warmth.