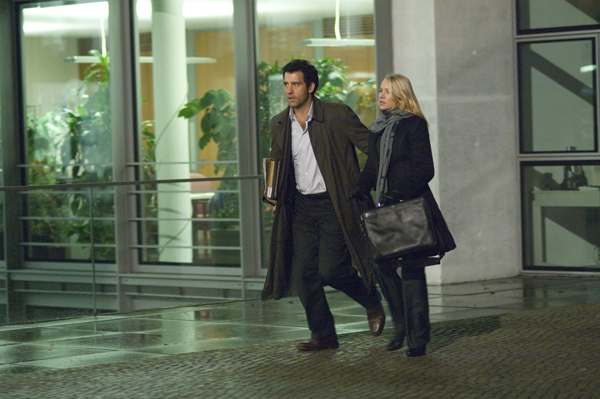 Interpol agent Louis Salinger (Clive Owen) is working on an informant who may have some important information about a huge international arms deal. But, his partner suddenly and mysterious dies, leaving Louis with a case that involves the world’s largest bank, conspiracy, corruption, cover-up and murder. With the help of Manhattan assistant district attorney Eleanor Whitman (Naomi Watts), Salinger must span the globe to bring justice in “The International.”

Interpol agent Louis Salinger (Clive Owen, "Children of Men," "Shoot 'Em Up") shadows the meeting his colleague has in a car outside Berlin's Central Station with the anonymous insider that could break open their case, only to see Tom (Ian Burfield) expire minutes after leaving the car. Salinger contacts Eleanor Whitman (Naomi Watts, "Eastern Promises," "Funny Games U.S.") in the NYC DA's office to help him prove Tom was murdered to cover up the clandestine operations of Luxembourg bank "The International." Director Tom Tykwer ("Run Lola Run," "Perfume: The Story of a Murderer") steps away from his Kieslowski influenced early films to take on an espionage thriller that could have been lifted from today's headlines. A corrupt banking institution is kept under wraps by all the world's power players - the C.I.A., the Russian Mafia, Italy's Carabinieri - as it manipulates global conflicts in order to control resulting debt. Tykwer's film is a bit chilly, but working with long time cinematographer Frank Griebe, it is stunning to look at, and Lou's determined need for justice will find plenty of audience empathy. Screenwriter Eric Singer follows a classic thriller outline, revealing a puzzle piece by piece until a picture begins to emerge. Those looking for popcorn thrills will likely be turned off at the onset, wondering why they should care why a European bank is seemingly making a $200 million deal for guided missile systems. But as Lou keeps running into walls - inconsistencies corrected in police reports, leads dying convenient 'accidental' deaths, cooperative law agencies slamming doors shut, assassins disappearing into thin air - intrigue begins to set in. Wearing a weary expression and an accumulation of 5 o'clock shadows, Clive Owen is determined and relentless, yet not infallible. In Tykwer's film, it's not only the hero's gunfire that finds its target. Ulrich Thomsen ("The Celebration," "Mostly Martha") brings a scaly malevolence to the International Bank of Business and Commerce's chief Jonas Skarssen and Brian F. O'Byrne ("Bug," "Before the Devil Knows You're Dead") creates one of cinema's more unique hit men as The Consultant, a cool customer who, while not possessing a hidden heart of gold, briefly teams with the good guy in the film's most exciting set piece. Watts is little more than window dressing, but character actors Felix Solis and Jack McGee (TV's "Rescue Me," "21") make strong impressions with little screen time as NY detectives. Armin Mueller-Stahl ("Music Box," "Eastern Promises") is the picture of dashed idealism as IBBC's guard dog. The filmmakers travel from Berlin to New York City to Milan and Istanbul and Tykwer revels in overhead shots of city squares and the cavernous spirals of the Guggenheim Museum and a Turkish mosque. Location credits appear to orient the audience, missing only the cliche of typewriter clacking to accompany them, yet Griebe gives us a distinctly European point of view. His work behind the camera is outstanding, from the interior car work from the film's opening to several action sequences which follow. A massive shootout in New York's Guggenheim is brilliantly staged, with video installations making surreal backdrops for gunmen and cowering bystanders. Another, quieter scene gives a concise visual breakdown of make-do police procedural for tracing bullet trajectories. The film's finale is satisfying yet open-ended, a difficult trick to pull off and one Tykwer accomplishes with wit. Closing credits continue to tell the tale via newspaper headlines that beg the reader - fact or fiction?

Eclectic director Tom Twyker came to world attention with his popular 1998 film, “Run Lola Run” and donned the caps of writer, director and composer for the fascinating 2006 pic, “Perfume: The Story of a Murderer.” With “The International,” he goes globetrotting with an actioner that delivers on its requisite chases and shootouts (with a gunfight in New York’s Guggenheim Museum that is worth the price of admission). The story about corporate greed and corruption has been done before but Twyker tells it with deft skill. There is the same international flavor delivered in the “Bourne” films as the action moves from one exotic location to another. Berlin, Lyon, Luxembourg, Milan, New Your City and Istanbul are the backdrops, vibrantly photographed by long time Twyker lenser Frank Griebe. Production values run high throughout the film and help move along the routine yarn by first time scribe Eric Warren Singer. Although Naomi Watts is second billed, “The International” focuses mainly on Owen’s Louis Salinger as the Interpol cop who digs deep into the worldwide influence of IBBC, the number one bank on the planet. Salinger cannot figure out why such a monolithic financial institution would throw billions of Euros into the purchase of complex missile-guidance systems, something that would not make the bank much on its return. He seeks the help of an influential Italian arms broker, Umerto Calvini, who brokers high level deals for IBBC. Louis and Eleanor think that the bank wants to control world conflict. Calvini corrects the misconception, telling the investigators that the bank does not want to control any conflicts. Instead, it wants to control the debt the conflict creates. Therein lays enormous profit and power. Supporting cast is sound with Ulrich Thomsen as the mastermind, Jonas Skarssen, who pulls the strings that control the international dealings. Armin Mueller-Stahl plays the conflicted ex-East German Stasi officer, Wilhelm Wexler, a man who sold his soul to IBBC. The rest of the cast, mostly unknowns to American audiences, are adequate, if underdeveloped by the script. “The International” shines, though, with its copious action and gunplay, much of which would do executive producer John Woo proud. The enormous behind-the-camera crew makes it a rich looking film that is easy to watch. Too bad the routine story brings it down a notch.