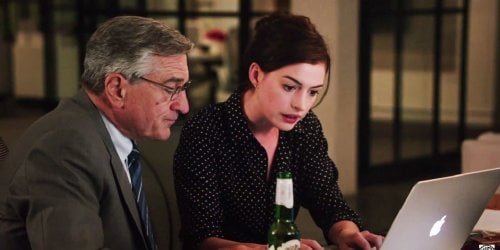 In her early twenties, Jules Ostin (Anne Hathaway) has become an entrepreneur, running a successful fashion website. But as her business grows, so do her headaches and she's surprised that the person who helps her the most is 70 year-old Ben Whittaker (Robert De Niro) who quit retirement to become "The Intern."

Writer/director Nancy Meyers ("Something's Gotta Give") first delved into cross generational comedy with her 1998 remake of "The Parent Trap" and has championed the idea of senior sex in comedies "Something's Gotta Give" and "It's Complicated." She combines the two with "The Intern," a workplace comedy where a young businesswoman finds her savviest support in an older gentleman whose experience and calm trump more modern skills. Hathaway and De Niro play well together, but a mid-point heist adventure begins a trend towards illogic the film never recovers from. When we meet him, Ben's been a widower for 3.5 years trying to fill his time with travel, golf and other pursuits while evading the attentions of Patty (Linda Lavin, TV's 'Alice,' "Wanderlust"). A posted flyer for a senior intern at About the Fit near his own Brooklyn neighborhood intrigues him enough to tackle the requirement of making a video cover letter and posting it on Youtube. A series of interviews nets him the gig along with young techie Lewis (Jason Orley) and manchild Davis (Zack Pearlman, "The Virginity Hit"), but it is Ben who is assigned to Jules. Jules doesn't even remember her COO Cameron's (Andrew Rannells, HBO's 'Girls') outreach pitch, telling Ben they'll just be setting an example. With nothing to do, Ben has time to observe and is soon helping out in all kinds of ways, especially with Jules's stressed assistant Becky (Christina Scherer). He scores big points for dealing with Jules's biggest pet peeve - a desk that's become ATF's equivalent of a junk drawer - unasked. When he spies her driver imbibing, he tactfully assumes the man's job and gains Jules's trust. Jules is at a stressful crossroads, Cameron having informed her that their backers believe they need a seasoned CEO. Jules is hurt, but realizing that her family life is suffering (husband Matt (Anders Holm, "The Interview") quit a successful career to be a stay at home dad with their adorable daughter Paige (JoJo Kushner) and neither sees her enough), she begins interviewing candidates. The obvious solution would be Ben, a former phone book company exec, but that's not the job of a fairy godmother, which is what Ben, with his chivalry, handkerchiefs and life advice, really is here. De Niro's created a cute older gentleman who delights one and all, including office masseuse Fiona (Rene Russo, "Nightcrawler") and homeless intern Davis, both of whom essentially move into his tasteful brownstone (this is Nancy Meyers land, where magnificent kitchens and elegant interior design rule). He gets Jason (Adam DeVine, "Pitch Perfect 2," TV's 'Modern Family') back into the good graces of Becky and gets Becky the recognition she craves. He somehow even manages to make Cameron's Venture Capital concerns vanish without a trace. Hathaway, at least, has created a character that seems more rooted in real life, one bizarre drinking binge excepted. This is her "Devil Wears Prada" assistant all grown up and she's appealing in a role that calls for a 'difficult' management style. With "The Intern," Meyers makes an admirable argument for the value of seniors in the workplace. If only she hadn't delivered it in a contrived fairy tale. Grade: