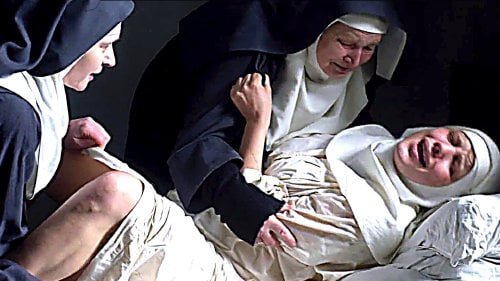 Warsaw, Poland, 1945. A group of nuns are at prayer when we hear a scream. One young novice sneaks out of the convent and goes to a nearby French Red Cross hospital. She begs one doctor, Mathilde Beaulieu (Lou de Laage), to help and the medico agrees and accompanies the novice back to the nunnery. The doctor is unprepared for what she finds when she meets “The Innocents.”

I have been an amateur historian on World War II since I was a kid so I always am amazed when I discover an aspect of that war that I did not know. “The Innocents” tells the true story about post-WWII Eastern Europe that is new to me and something that I never considered. When the victorious Soviet Army defeated Hitler’s Germany, they laid waste to the former Nazi empire, including the rape of an estimated 500000 woman – about 100000 of whom committed suicide. “The Innocents” shows this horror through the eyes of the nuns, most of whom are young virgins, who are assaulted repeatedly by the Russian occupiers, resulting in seven pregnancies. Director Anne Fontaine tells the story (with the help of six credited writers) in a captivating and powerful manner that lays bare the inner conflicts of the pregnant nuns. They are sure their condition will result in their eternal damnation and I wondered how their terrible ordeal could have anything approaching positive finale. Happily, the payoff is worth the angst of watching the film. There is one aspect of “The Innocents” that stands out - Agata Buzech, as Sister Maria the assistant to the convent’s abbess (Agata Kuleza), gives a potent performance. She admits to Mathilde that the traumatic event of the gang rapes did not affect her as deeply as it did the novices because she once was “a party girl.” She also has the best dialogue, including a soliloquy delivered to Mathilde about faith that totally moved me. This is women’s, not a femme, film. The setting is bleak and the weight of faith on the nuns’ shoulders is palpable, but there is a transitioning as the mood of doom changes to one of hope and happiness as Mathilde and Sister Maria join forces to turn the crisis around. There is hope for the rest of us, maybe, too?