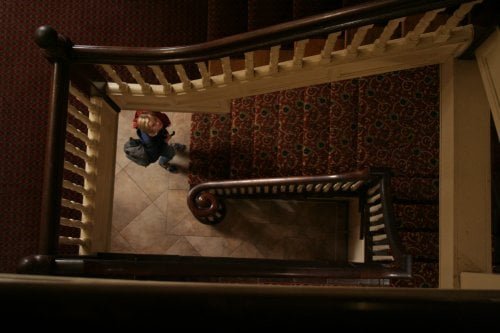 The Yankee Pedlar Inn has welcomed guests for over a hundred years but the quaint, rundown hotel has seen better times and the owner decided to close down. It is the last weekend of the inn’s existence and, nearly empty of guests, the two remaining employees, Claire (Sara Paxton) and Luke (Pat Healy), use the free time to try to study the paranormal activities that made the inn notorious for “The Innkeepers.”

The owner of the Yankee Pedlar Inn has gone fishing on its last weekend of business, leaving his young employees Claire (Sara Paxton, 2009's "The Last House on the Left") and Luke (Pat Healy, "The Assassination of Jesse James by the Coward Robert Ford") in charge. The hotel is largely vacant, the third floor already emptied of its furnishings, so Luke thinks it's the ideal time to try and get proof of the inn's reputed haunting by Madeline O'Malley (Brenda Cooney, "The House of the Devil"), a woman who hung herself when her lover rejected her. Luke's hoping to profit from a website he's building on the subject, but it turns out to be Claire who is the more attuned to the paranormal of "The Innkeepers." When writer/director Ti West and his cast and crew were filming 2009's "The House of the Devil," they boarded at the Yankee Pedlar Inn in Torrington, CT, and West claims more weird things happened there than on their film set. And so he decided to craft a film around the location in his followup. Sad to say, about the only really scary thing about his "The InnKeepers" is the apparent lack of towels when you need them. The location is indeed a good one, the film is well crafted and the camera loves Paxton (who, here, resembles a young Reese Witherspoon), but West unspools his ghostly tale exceedingly slowly and never builds any real suspense. We're always three steps ahead of our amateur sleuths and West pads the run time by sidetracking to dead ends. Paxton and Healy are able to initiate us into their shared, well worn boredom. They share shifts, but it only seems to be Claire who ventures forth with Luke's EVP recording device. She picks up on the piano in the lobby being played when there's no one there. West gives us the Inn's spectral history when Claire relates the story of Madeline O'Malley to the young son of one of their few guests, incurring the wrath of his mom. Claire's also thrilled beyond belief when Leanne Rease-Jones (Kelly McGillis, "Top Gun," "Stake Land"), a television star of her youth now working as a psychic healer, checks in. There's an unnecessarily odd relationship between them, Rease-Jones initially crusty and condescending, before she agrees to help Claire by trying to reach spirits. When an old man (George Riddle) arrives requesting a room on the third floor, Luke denies him while Claire is helpful, offering him the room with caveats. It will be absolutely no surprise to anyone what this man has planned. There's a visit to a coffee shop which does nothing but give a cameo to "Tiny Furniture's" Lena Dunham and the climatic scares rest on a completely unbelievable action by Luke and a groaner of a horror cliche from Claire. The film is one big drawn out build to an unsatisfying payoff, although the central philosophy of West's tale seems rich in promise. There's also no faulting Eliot Rockett's atmospheric cinematography, his camera floating down halls and around staircases, always peering in from behind doors. Makeup effects for the apparitions are effective, although they would have been more so if used more fleetingly. "The Innkeepers" is a quality production in service to an intriguing idea, but the film's rhythms are off. Now, where's the featurette on what really happened to West and crew at the Yankee Pedlar Inn?

Multi-hyphenate writer-director-editor Ti West uses the historic, real life Yankee Pedlar Inn as his setting for a (too) subtle tale of the supernatural goings on at the hotel. Claire and Luke, marking time before they lose their jobs, half-heartedly investigate the legend that the old hotel is haunted while taking shifts to slack off and sleep in a couple of the inn’s few remaining furnished rooms. The place has only three guests – a woman, and her son, who left her husband and an aging actress turned spiritualist (Kelly McGillis) - until a very old man asks for the room in which he spent his honeymoon with his new bride. That room, of course, is significant in the legend of the inn’s ghost – a bride who hanged herself long ago. The obvious direction of the screenplay becomes evident early on in the film. The premise for “The Innkeepers” is intriguing but takes too long to get to the scary bits and does not give us enough of them. The saving grace, though, are the performances by Sara Paxton and Pat Healy. The camera loves Paxton, in particular, which is a good thing as much of the film is spent following Claire around the hotel and, in a tacked on scene, to the local greasy spoon to get coffee. Healy plays Luke as a slacker who is trying to build a web site about the hotel spooks. Both characters are ambitionless schlubs and likable enough to give the film a boost. Ti West has a good eye for location and setting and uses his cameras effectively. His script, though, does not have the structure or the scares to recommend “The Innkeepers” and makes me wonder how things would have fared with a better screenplay.