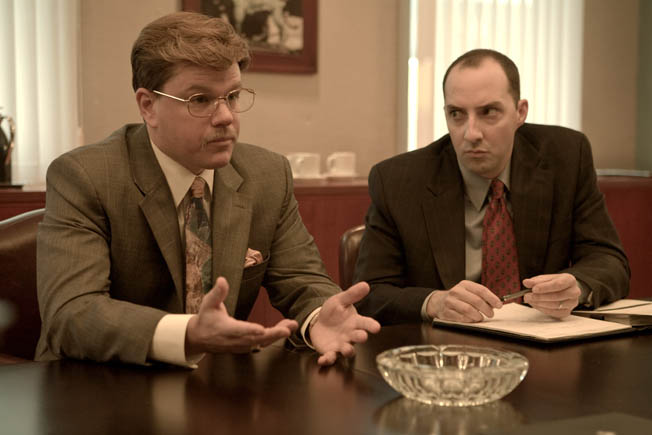 Microbiologist Mark Whitacre (Matt Damon, “The Bourne Ultimatum”) was the youngest Corporate VP ever in Decatur, Illinois’ Archer Daniels Midland. With his lysine project in jeopardy, Mark reported that their was a mole in their midst who was contaminating his microbes, but whatever Whitacre’s plan, he wasn’t expecting the F.B.I. to be called in to tap his phone. Expecting ultimate glory, Mark cued local F.B.I. agent Brian Shepard (Scott Bakula, TV’s “Quantum Leap”) to the case of his career regarding ADM price fixing tactics, becoming “The Informant!”

For his third biopic, director Steven Soderbergh (“Che”) takes some of the corporate malfeasance of his “Erin Brokovitch” but plays it with the loosey goosey retro goofiness of his “Ocean’s Eleven” films. It’s as if Damon’s dupe from the “Eleven” films became ambitious and self-deluded (hmmm…, just like Damon’s dupe in those “Eleven” films), as if Erin Brokovitch thought that by doing right by the victims of W. R. Grace, she’d be made their Director of Public Relations. But there is something a little troubling about making light of a character who in real life was diagnosed with Bipolar Disorder and while the film is funny in a subversive, no real laughter kind of way, there is also something always a little off about it. What Soderbergh does do right is get a sense of the corporate world of the Midwest in the 1990’s – just think 1970’s elsewhere, from the bland gold coloring schemes to Damon’s moustache. Choosing Marvin Hamlisch (“The April Fools,” “The Prisoner of Second Avenue”) for the score adds to the time warp and aids the comedy immeasurably. And Damon gives one of the best performances of his career here, a sneak-up-on-you the-dupe-as-duper narrator. George is indignant when he is criticized for his lysine output and Damon builds each scene as if on a righteous defensive that wins his audience – both within the scene and those watching the film – over every time. He combines a soft-spoken authority, eyes boring out from behind square lenses with open-mouthed indignation. Once he’s on the offensive, we’re kept on tenterhooks by his blatant fumbles, like narrating introductions into his hidden wire or adjusting a recording device openly during a meeting, and yet Whitacre always seems to land on his feet. But his conviction that his actions will catapult him into the top position at ADM begins to show the cracks in Whitacre’s psyche. Justice Dept. rep Robin Mann (Ann Cusack, sibling of John and Joan, in a delicious turn) gently tells him that the work environment he is used to will probably change significantly. Even his ever-loyal wife Ginger (“Two and a Half Men’s Melanie Lynskey) tells him his logic makes no sense. And then, after he’s told the F.B.I. and his own lawyer that he has told all, he begins to tell more and what he has to tell is troubling indeed. One of the greatest ideas Soderbergh hit upon to present the dubious character of Mark Whitacre is a narrative voice over that pops up continuously like a stream of consciousness. In the midst of a corporate deal or round of introductions, Mark’s mind will jump onto tangents like how the polar bear covers its black nose with its paw to camouflage itself from its prey or to fret over the dirth of sales on his favorite Brioni ties. Soderbergh has also dotted his cast with stand up comedians from both of the Smothers Brothers (Tom as ADM CEO Dwayne Andreas, Dick as a judge) to “In the Soup’s” Joel McHale as an F.B.I. agent (others include Rick Overton, Tom Papa and Patton Oswalt). It is serendipitous, too, that Whitacre’s area of expertise was developing foodstuffs based on corn, a subject being flogged in many recent documentaries. “The Informant!” is an amazing story – think “Catch Me If You Can’s” Frank Abagnale, Jr. if he was successful while also living in a fantasyland – yet the film leaves one wishing it had been something more substantial. No fault to Damon, though, who should find himself angling for one of those five Best Actor slots at year’s end.