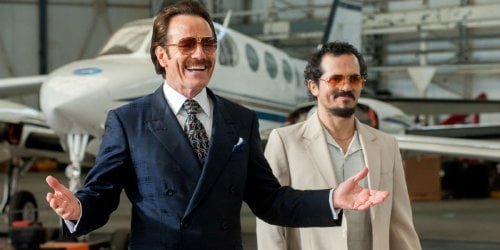 Back in the 80's, Columbian kingpin Pablo Escobar's drug trafficking had reached far into the U.S. with 15 tons of cocaine coming in weekly. Federal agent Robert Mazur (Bryan Cranston) had the idea to follow the money rather than the drugs and so, posing as money launderer Bob Musella, he teamed up with scrappy customs agent Emir Abreu (John Leguizamo) and rookie Kathy Ertz (Diane Kruger) and went deep undercover as "The Infiltrator."

Where's Martin Scorsese when you need him? He's a director that can break down complex processes in an artful montage. Director Brad Furman ("The Lincoln Lawyer") is content to simply place his protagonist in a series of escalating situations with informants, business fronts, bankers and Escobar's men leaving his audience to connect the dots. The cast is great, individual scenes work and Robert Mazur's story (his book was adapted by Ellen Sue Brown) is one hell of a tale, but "The Infiltrator" comes up short. Bob is wary of Emir's methods, so he's not too keen when Emir's informant (Juan Cely) pulls a gun on him on his first foray of his new mission. But soon he's in with the violently unstable Gonzalo Mora Jr. (Rubén Ochandiano, "Biutiful") and Sr. (Simón Andreu, "The Way") making his case as Escobar's financial clearing house. They're hedonistic grenades who 'thank' him by buying him a stripper, but Bob demurs, ever faithful to his beloved wife Evelyn (Juliet Aubrey, "The Constant Gardener"), deflecting suspicion with an invented fiancee. Enter greenhorn Kathy to flesh out the subterfuge. Bob carries a recording device in his briefcase and is astonished by international bankers' willingness to suck up drug money. The Gonzalos pay him a visit in 'his' Miami mansion, bringing along the flamboyantly gay and deadly Javier Ospina (Yul Vazquez, "Captain Phillips"), Bob once again having to turn down advances. Climbing up Escobar's hierarchy, Bob endures a harrowing 'test' (in which another man is executed beside him) to reach Roberto Alcaino (Benjamin Bratt). Soon Bob and Kathy are not only friends with Roberto and his wife Gloria (Elena Anaya, "Talk to Her"), but 'family.' When Bob's boss Bonni Tischler (Amy Ryan, "Central Intelligence") prioritizes a $23 million cocaine bust over Bob's complex infiltration, he and Kathy help a panicking Gloria, but Bob and Kathy still have an ace up their sleeves. Either some of the many plot strands should have been jettisoned or the filmmakers should have gone for a longer running time because there's an awful lot of story packed into 127 minutes, too much to entirely make sense of. If Escobar can send a bloody warning to Bob's modest home, why couldn't his cartel figure out that the estate they visited was not his? Yet even though we're thrown into one unsettling situation after another, the film does have the throughline of Bob's endangerment, sudden hits too close for comfort, the smallest slip potentially fatal. Cranston flips his 'Breaking Bad' character and proves equally comfortable on the other side of the law. We can see his fear through the mask he presents and feel his divide between Ev's wishes and his commitment to the job (a scene in which the elder Gonzalo comes across Bob and his real wife celebrating their anniversary is both suspenseful and emotionally stressful). The film's nicest surprise is how adept Kathy proves to be, Kruger disarming, her gambits paying off delightfully. Olympia Dukakis ("Moonstruck") adds humor as Bob's Aunt Vicky, recruited to sell her nephew's reach to the Alcainos. Bratt and Anaya are elegant and cultured, belying the source of their wealth (giving Bob and Kathy their own "Donnie Brasco" moment). The film also stars "Harry Potter's" Jason Isaacs as government lawyer Mark Jackowski, "The Lincoln Lawyer's" Michael Paré as unfortunate informer Barry Seal and a chilling turn from Cesare Taurasi ("The Man from U.N.C.L.E.") as Escobar higher up Gerardo Moncada. "The Infiltrator" is a gritty, fascinating tale of one man's ingenious resolve, but it is difficult to see the whole machine through its many moving pieces. Grade: