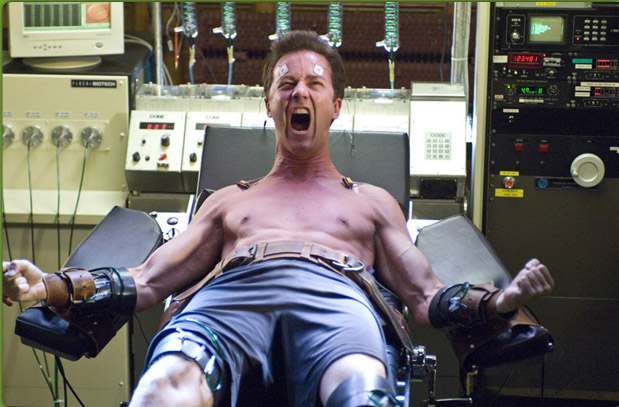 Exposure to the Gamma Bomb has inflicted Dr. Bruce Banner (Edward Norton, "The Illusionist," "The Painted Veil") with the unique condition of turning into a giant green monster when he is under stress. Unique, that is, until General Ross allows the serum to be used to combat him, resulting in a creature far worse - The Abomination - who Banner must now battle to save New York City from destruction as his alter ego, "The Incredible Hulk."

Many people are wondering why, after Ang Lee's 2003 (unjustly) maligned "Hulk," that the big green guy is being resuscitated. Well, for one thing, this isn't the same movie. "Hulk" dealt with the genesis of the beast and was a father/son drama. In this, more faithful to the comic book film, the Hulk's creation is dealt with under the opening credits before we're dropped into a Rio favela where Bruce Banner is hiding from General Thaddeus 'Thunderbolt' Ross (William Hurt, "Mr. Brooks," "Vantage Point") while trying to come up with a cure for his condition. "Hulk" bore the creative stamp of its director. This film is a more traditional genre piece and it's not bad. One wouldn't expect to find Bruce Banner living in a slum and working at a bottling plant, but that's where we catch up with him. Despite obvious interest from gorgeous coworker Martina (Débora Nascimento), Bruce keeps to himself, slowly learning Portuguese (he catches Bill Bixby dubbed in 'The Courtship of Eddie's Father') and how to control his anger via breathing techniques. He wears a fitness watch that monitors his heartbeat. A caption informs us 'Days Without Incident - 152.' Banner, giving himself the alias 'Mr. Green,' is also in communication with a 'Mr. Blue' via computer texting. Mr. Blue is trying to help Bruce find his cure. But Bruce's luck runs out one day when he cuts himself and misses the splash of blood that makes it into a soda headed for the U.S. That genetic trace alerts Ross to his whereabouts and Ross sicks his pit bull, Emil Blonsky (Tim Roth, "Youth Without Youth," "Funny Games U.S.") onto him. Cornered and enraged, Banner morphs and gets away. When he comes to, he discovers he's made it all the way to Guatemala. Banner's also been pining for Betty Ross (Liv Tyler, "The Strangers") and finally heads back to Culver University to retrieve data Mr. Blue needs in order to continue his work. He finds safe haven at Stanley's Pizza, but when Betty arrives there with new beau Dr. Samson (Ty Burrell, "Fur: An Imaginary Portrait of Diane Arbus," TV's "Back to You"), she spies Bruce and chases after him. Her dad is zeroing in with newly hulked up Blonsky, though, and Bruce's incident clock gets zeroed out again. Betty stays by Bruce's side even after witnessing his transformation and the two go on the lam, heading to New York and Mr. Blue. The script, by Zak Penn ("Fantastic Four," "The Grand") and star Norton, covers the bases well and with some wit. The Hulk's propensity for busting out of all of Banner's clothes save his pants is dealt with by several references to the 'stretchy' pants Bruce always buys. The romantic obstacle of Banner's Hulkness is dealt with head on when an attempt at sex sends his heart rate into dangerous territory, and there's no helping the thought of just what might bust out. We get the 'mad scientist' concept in triplicate, first with Banner himself, again with Ross, who dreams of scientific soldiers and lastly with Mr. Blue, revealed to be flaky university professor Samuel Sterns (beautifully cast Tim Blake Nelson, "Syriana," "The Astronaut Farmer," reminiscent of the nerdy researcher in "The Silence of the Lambs"), nicely planted here with seeds of future villainy. Special effects are pretty standard, with the Hulk looking a bit cartoony excepting his rather realistic looking teeth. Movement of the Hulk is well done as is his spatial placement among objects and other actors. His ultimate nemesis, the Abomination, certainly is, its under sized head smacking of steroid abuse. Their final showdown is extremely violent, with the Hulk making up in brains what he lacks in brawn. French director Louis Leterrier ("The Transporter," "Unleashed") shows a natural affinity for the material. Ed Norton seemed like an odd choice for this role, but he's quite good, intellectual intensity replacing the emotional vulnerability Bana brought to the role. Norton also has nice chemistry with Tyler, whose cushy lips were made to say 'Bruce.' Hurt and Roth don't bring anything special to their characters, but Blake Nelson is a blast as Blue. Paul Soles ("The Five Senses," "The Score") as Stanley and his old style pizza parlor (art direction by Daniel T. Dorrance, "Mission: Impossible III") add a nice bit of nostalgia to the piece. In addition to Bixby's televised homage, his counterpart, Lou Ferrigno (TV's "The Incredible Hulk"), cameos as a school security guard 'bought off' by one of Stanley's pizzas. And of course, Robert Downey Jr. ("The Iron Man") makes a last act appearance as Tony Stark, setting up a potential Avengers gathering (opening credit 'headlines' mention both Stark and Nick Fury). "The Incredible Hulk" isn't as much fun as "Iron Man" was, but it doesn't suffer from the roteness that affect so many super hero films either. It gets the job done.