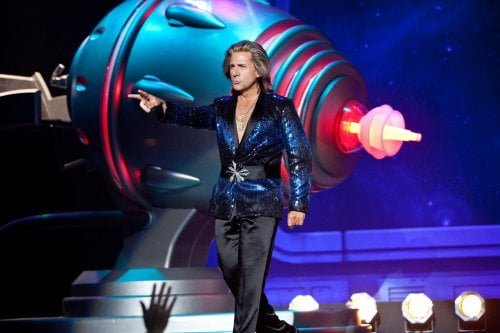 Magician team Burt Wonderstone (Steve Carell) and Anton Marvelton (Steve Buscemi) have been a fixture of the Las Vegas Strip for years, but their luster is beginning to fade as fast as their friendship. Anton knows that new competition is making their act look stale, but his partner's ego knows no bounds. When their theater owner Doug Munny (James Gandolfini) lays out harsh stakes, it will be a big gamble to bet on the return of "The Incredible Burt Wonderstone."

I've come to the conclusion that if Olivia Wilde ("The Words," "Deadfall") is cast in a film, it won't be good. At least this time around, the film and her performance are at least likable to a degree, but if this is a comedy, give me tragedy. The film is a series of cliches strung together with a completely implausible comeback story and its funniest joke is shown over the closing credits. The film is pleasant enough and a bit sweet, but it feels slapped together. Burt (Carell with a lion's mane and sprayed on tan) is a raging egomaniac with a furnished elevator and a green screen closet to make souvenir photos for his one night stands (represented here by 'Community's' Gillian Jacobs0. He and Anton have had a good run at their own theater within Bally's, but a new street magician by the name Steve Gray (Jim Carrey) is making guerilla appearances which are broadcast on cable and he's all but stolen their thunder. When Anton has a great promotional idea, Burt ruins it. Soon Anton's handing out magic kits in the third world and Burt's doing demos at an Odd Lots. Two things turn Burt around. He meets his idol, Rance Holloway (Alan Arkin, "Argo"), at a retirement home and he reconsiders his last assistant Jane (Wilde) from a more humble perspective. "Horrible Bosses" writers Jonathan M. Goldstein & John Francis Daley have nostalgia for magic tricks of old but despite a cameo from David Copperfield and the fact that Carrey's made up like a low rent Criss Angel, they don't seem to have any idea where it is now. Gray's act always involves doing himself bodily harm, but half the time there appears to be actual 'magic' involved, which leaves one wondering why he's considered a 'bad magician' (his last stunt is, admittedly, unbearably dumb). Anton's great idea is an old Copperfield trick and the film's climatic act smacks of Andy Kaufman. And it's not just the magic that's out of whack - never has a 'star' hit rock bottom like the boomerang he does in this movie, back in front of crowds all too soon. Steve Buscemi, in a bad wig, has called in one of his Adam Sandler movie performances. Television director Don Scardino (TV's '30 Rock') hasn't paced the film well and despite the comedic talent on hand, it's rarely funny. Carell's got the blowhard bit down pat - maybe if Wonderstone hadn't had such a predictable character arc, the film could have gone somewhere. As it is, I'd rather have followed the Munny - Gandolfini's been pulling sleight of hand in supporting roles lately.