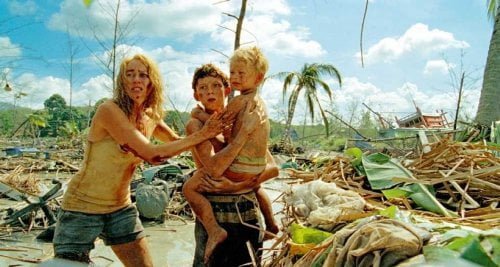 In 2004, the Alvarez Belon family spent their holidays at the Orchid Resort in Thailand. The day after Christmas, while relaxing and playing by the pool, they were whipped into the churning waters of the devastating 2004 Indian Ocean tsunami which killed a quarter million people. "The Orphanage" writer and director team of Sergio G. Sánchez and Juan Antonio Bayona bring their story to the screen changing the family from Spanish to British ex-pats living in Japan, unfolding miraculous events which would seem to be part of "The Impossible."

A few years back, Clint Eastwood astounded with his creation of this same tsunami in "Hereafter." Bayona goes him one better, refusing to use computer generated effects, and he makes us feel the uncontrollable force of thousands of gallons of water and debris mowing down trees like a T-Rex, beating, breaking and bruising his star, Naomi Watts ("Fair Game," "J. Edgar"). But once the disaster portion of his film has subsided, we're left with a story of coincidence and cliche. We're also left wondering why, after becoming so enthralled with the tale of Maria Alvarez Belon and her family, he felt the need to go change their nationality (we see the real family during closing credits). At best, Bayona succeeds in showing that the ordeal was far from over once the waves receded and he's gotten a noteworthy performance from first timer Tom Holland (London stage's 'Billy Elliot') as Maria (Watts) and Henry's (Ewan McGregor, "Salmon Fishing in the Yemen") eldest son Lucas. The film has an unnerving opening. We're in the dark, hearing a creaking noise like from within a ship's hull. Then everything goes calm only to make us jump when a plane blasts overhead on the screen. We witness a family of five all rushing out of their home to make that flight. There's turbulence and eldest son Lucas observes that his mother is a scaredy cat, just like younger brother Thomas (Samuel Joslin), whom he's been tormenting. One can just feel Lucas's judgements being made so that they may later be dismantled. On that horrible day, warning comes by nothing more alarming than a bar blender that ceases to operate and a breeze that kicks up mere seconds before all hell breaks loose. Henry is in the pool with the boys, Maria farthest away, but miraculously, as she's swept away, she and Lucas are within each other's eyesight. Each leaves safety a number of times to make way towards the other. They survive a second wave, then emerge from a barren wasteland. Lucas is shocked to discover the extent of his mother's injuries. They hear a child crying and Maria insists that they will find it if it's the last thing they do. Lucas goes along grudgingly, again, to have his expectations changed later on. The first Thai people who are given any kind of shrift are the men who find the survivors and drag Maria into their village, where transport to a hospital can be arranged. That facility is seriously overwhelmed to the point that Maria self diagnoses to save herself. In order to keep him occupied, Maria suggests Lucas try and help the staff and he finds himself in the business of reuniting families in lieu of his own whom they believe to be dead. Eventually we learn that Henry has survived along with Thomas and Simon (Oaklee Pendergast), the youngest. Henry is beside himself searching the area for Maria and Lucas. While Ugly Americans and their golf bags line up to get out of Dodge, Henry jumps from one transport to the next searching. He even gives care of his two boys to a stranger so that he can rummage through the wreckage of the shore. Of course they are abandoned, just as Maria is not in her hospital bed when Lucas returns one afternoon. Everyone crosses paths ironically without seeing one another until finally they do. Fernando Velázquez's overblown score insists we get emotional. Young Holland is terrific as the elder brother suddenly made a man by circumstance, but there's little, really, for Watts and McGregor to do other than be in pain or in anguished desperation. Geraldine Chaplin, who also appeared in a small role in "The Orphanage," is the kindly older figure who says magical things about the stars in the sky to calm scared children. The true story behind "The Impossible" is indeed quite remarkable and Bayona impresses with his recreation of the unprecedented disaster which set it in motion. But it is difficult to really see the point here. A Spanish family survived and reunited against incredible odds in a foreign country, but for the masses they must be made more generic. Unfortunately, the effect of this casting choice seems to have seeped into the tale itself.

Maria (Naomi Watts), Henry (Ewan McGregor) and their three boys are spending their Christmas vacation in Thailand. The weather is beautiful and the family is enjoying some quality time together. But, danger is lurking thousands of miles away and their lives, and the lives of countless others, will be turned upside down when the December 26, 2004 tsunami smashes into the Thai coast making “The Impossible.” This is an earnestly told true life tale of a family’s separation at a time of horrific natural disaster and the arduous lengths they must go through to reunite. Comparisons to Clint Eastwood’s tsunami-based drama “The Hereafter” are apparent and both do a gut-wrenching and haunting job of showing the shear suddenness and violence of Mother Nature when she gets angry – and a tsunami is high up there in the getting angry category. But, the comparison is just for the first 10 minutes. After that, “The Impossible” is about the family’s survival during their separation amidst the fury of the tidal wave and its devastating aftermath. Earnest is a good word to help describe “The Impossible.” The aptly titled film is, from when the wave first hits, to when the family reunites (not a spoiler), truly about an impossible situation that turned out not to be. The visual portrayal of the catastrophe – an idyllic coastal resort becomes an underwater wasteland in minutes – backdrops the survival tales as the camera follows the plight of the family. The focus is first on Maria and eldest son Lucas (Tom Holland) as they fight a fast-moving, debris-laden sea water no-man’s-land to get to each other. But this only the beginning of their plight as badly injured Maria and Lucas try to find help. Meanwhile, Henry, battered but unbowed, is conducting his own search for the couple’s two younger sons, Thomas (Samuel Joslin) Simon (Oaklee Pendergast). Once he (perfunctorily) finds them, he begins his journey to find his wife and eldest son. Since you know the outcome up front, it is up to the imagination of the filmmakers to keep you interested. The filmmakers do so in their yeoman-like and, hopefully uplifting, telling of a family’s survival and belief in each other. Acting is solid and Naomi Watts makes you wince with the pain and suffering Maria endures. Ewan McGregor’s Henry is a stalwart husband and father who will not give up hope (well, maybe during a moment of emotional weakness) in his quest to reunite his family. The real find in “The Impossible” is Tom Holland’s performance as the eldest son who, at only 14 years old, is called upon to perform as a man as he doggedly tries to get help for his mother and others. It is an impressive performance from the young unknown. Techs are where “The Impossible” excels with the devastating tsunami a creation of physical special effects and not computer generated. Sophomore director Juan Antonio Bayona (“The Orphanage”), unfortunately, had to change the Mexican family of the real life story and Anglicized the cast and story to get a bigger piece of the box office pie (and, likely, financing and distribution).