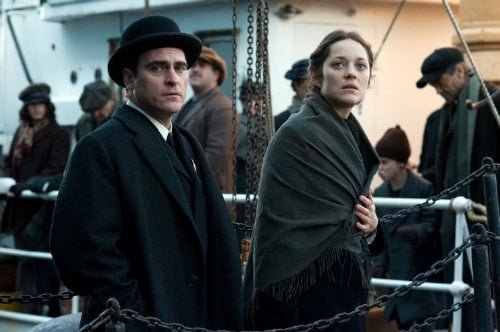 Ewa Cybulska (Marion Cotillard) and her sister Magda (Angela Sarafyan) are seeking a new life when the arrive at Ellis Island in 1921. But, Magda is ill and doctors pur her in quarantine and Ewa must fend for herself on the mean streets of New York. A charming man, Bruno (Joachin Phoenix), offers to help her out. However, he has different things in mind than being her new best friend to “The Immigrant."

Escaping from war torn Poland, where they witnessed the slaughter of the parents, sisters Magda (Angela Sarafyan, "The Twilight Saga: Breaking Dawn Part 2") and Ewa Cybulski (Marion Cotillard, "Rust and Bone") arrive at Ellis Island only to face deportation. Desperate, Ewa enlists the help of Bruno (Joaquin Phoenix, "Her"), who gets her out as Magda is quarantined on the island's hospital. But Bruno's aid thrusts Ewa into a life of prostitution as "The Immigrant." Cowriter (with "Two Lovers'" Richard Menello)/director James Gray's ("Little Odessa," "Two Lovers") personal reflection on the hardships faced by his own ancestors is a soulful look at the struggle to survive in a new land. Featuring a heartbreaking, luminous performance from Cotillard, the film upends the Madonna/whore complex to depict Ewa's reality - a beautiful, religious young woman whose need for money pushes her into a personal hell. The two sisters are mirrored by the two male cousins who both claim they want to help Ewa get Magda off the island but who also share designs on Ewa. Phoenix is a tortured individual (telling Ewa about the days he tied tin to his shoes to dance for money as a child, he notes 'what we do to survive...') who sees Ewa as 'pure' yet convinces her to dance on stage and sell her body. When Emile, known as Orlando the Magician (Jeremy Renner), is hired by Bruno's boss Rosie (Yelena Solovey, "We Own the Night"), Ewa recognizes him as the performer she saw on Ellis Island (he gave her a white rose, proclaiming her beautiful), but Bruno is furious, suspecting his cousin will steal this woman as he stole his last. Bruno's desire will, ironically, prove both his undoing and his redemption. Gray and his cinematographer Darius Khondji ("Se7en") not only shot on Ellis Island, but have recreated a sepia toned Lower East Side, familiar from "The Godfather II." Ewa's cast into a world of bath houses and bars, some of her new 'colleagues' helpful (Jicky Schnee's Clara), others envious ("Higher Ground's" Dagmara Dominczyk's Belva). After Bruno's approached by Mr. Straub (Sam Tsoutsouvas) because he fears his son Leo ('Louis's' younger self, Patrick O'Neill) isn't 'manly,' Ewa gets her first unwanted customer. Afterwards she flees to Brooklyn to find the uncle Bruno told her hadn't wanted her, but while Aunt Edyta (Cotillard's Polish dialect coach Maja Wampuszyc) is overjoyed to see her, her husband Voytek (Ilia Volok, "Water for Elephants") proves as duplicitous as Bruno's lie. The change in boroughs provides a nice contrast of the American Dream and the American Dream fulfilled. Gray wrote the role of Ewa for Cotillard, whose face is lit like that of a saint. The makeup and finery piled onto her at the Bandits' Roost never looks right. The actress doesn't paint the character as a total innocent - experience has already taught her tough lessons - but the deck is stacked against her in spite of her resolve. Even better is Phoenix whose smooth charm is clearly masking the inner turmoil which gradually bubbles to the surface. Renner gives a lightness to his performance that signals both magical romance and an unreliability of character. The film's last shot is full of irony, a naturally composed split screen of hope and despair. "The Immigrant" is like an antique photograph come to life with ghosts of the past.

Ewa Cybulska (Marion Cotillard) and her sister Magda (Angela Sarafyan) are seeking a new life when they arrive at Ellis Island, New York in 1921. But, Magda is ill and immigration doctors pull her out of line and put her into quarantine. Ewa must fend for herself on the mean streets of New York with no money and no place to stay. A charming man, Bruno (Joachin Phoenix), offers to help her out and give her a place to sleep. However, he has different things in mind than being the new best friend of “The Immigrant.” Marion Cotillard inhabits her character, Ewa, as the young immigrant hoping for a new and better life for her and her sister. When Magda is taken away and the immigration inspector declares Ewa as a “woman of low morals,” her hopes turn to fear of being deported back to the Poland she thought they had escaped – without her sister. Bruno appears sympathetic to her plight and intercedes with an immigration official, securing Ewa’s release and offering her a place to stay. He tells her that it will take a great deal of money to get Magda out of quarantine but he will help her get it. Bruno’s motives soon become apparent to the fragile Ewa. Things get more complicated for Ewa, while she waits in the immigration detention center, when a magician, Orlando (Jeremy Rainer), gives a free performance and she catches his eye. The suave and fun-loving prestidigitator sweeps Ewa off her feet but also invokes the anger of Bruno, Orlando’s cousin and mortal enemy (for reasons explained). This added dimension blends in nicely with Ewa torn between making the dreamed-of life in America and standing by her sister. This all makes for a very complex tapestry that wraps around Ewa and her always present loyalty to Magda. Cotillard captures the camera every minute she is on the screen but her co-stars, Joachim Phoenix and Jeremy Renner, hold their own, too. Phoenix, in particular, is a very complex character, sometimes cruel and sometimes kind and always conniving to make a buck. He slyly convinces Ewa to become a prostitute in order to earn the money to free Magda. Renner, as Orlando the Magician, is the opposite of Bruno in mood and temper and makes for a likable character, especially as her charms Ewa. This is a sad and tragic story, written by director James Gray and Ric Menello, that uses sepia tones, spot on costuming, deft production design to convey both the time and the mood of that time. Couple these values with the well-written and told story and the fine performances all around – especially Cotillard, who uses her eyes and subtle expressions to convey volumes – make for a film that will appeal to more mature audiences.