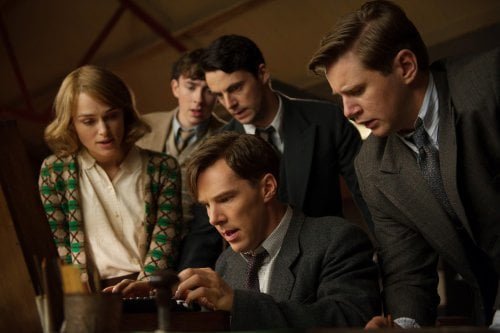 In 1927, 15 year-old Alan Turing (Alex Lawther) was a bullied boarding school Maths whiz, until he was rescued by Christopher Morcom (Jack Bannon), who introduced him to cryptography. In 1939, his knowledge of Germany's Enigma coding machine procured the closeted gay man a job at a top secret facility in Bletchley Park, but his superiors and coworkers found him arrogant and odd. When his requisition for 150 BP to build a Universal Machine to break the code was turned down by both his group leader Hugh Alexander (Matthew Goode, "Match Point," "Belle") and Commander Denniston (Charles Dance, "Dracula Untold"), Turing (Benedict Cumberbatch) wrote to Winston Churchill himself and shocked everyone when the PM gave him command of the project. As the clock ticked, lives were lost and frustrations rose, but Turing believed the machine he called Christopher was the only way to win the war in "The Imitation Game."

Adapting Andrew Hodge's book a 2nd time, screenwriter Graham Moore uses three time periods to tell Turing's triumphant yet tragic story (and in each, a different character will speak the movie's tag line, 'Sometimes it is the people whom no one imagines anything of who do the things that no one can imagine.'). We first meet the man in 1951 Manchester. As Cumberbatch narrates ('You must listen closely...I'm in control...Do not judge me until I'm finished'), we see his Turing cleaning up a mess around a machine trailing loops of cables. Detective Nock (Rory Kinnear, "Skyfall," Showtime's 'Penny Dreadful') has arrived with a police inspector, responding to a burglary report from a neighbor, but Turing says nothing is missing. Nock finds the matter suspicious, believing Turing's hiding, something and indeed, when he begins to look into the man he finds his war record is blank. Turing's initial interview with Denniston sets the stage for his entire career at Bletchley. Denniston's jokes are responded to literally, yet Turing's not lacking in wit. Humility's something else again, but his knowledge of the device the Germans are using for their coded communications is enough to get him in. While his coworkers try to decode German messages, having to restart each day (the Enigma's settings were changed daily, with over 150 million possibilities), Turing takes a longer view. When he's made head, the first thing he does is fire the team's two linguists (and is proven right when 'Heil Hitler' is the only phrase they really needed), instead placing an ad asking anyone who can solve his crossword puzzle in under ten minutes to apply for a job. When the applicants are tested, the winner is a twofold surprise. Joan Clarke (Keira Knightley), the only woman, has bested Turing's own time by over two minutes. When she turns down the position because of her parents' concerns about the all male environs, Turing arranges for her to be housed with the Wrens and smuggles coded messages to her lodgings for her to decipher, a dangerously unlawful move with later repercussions. But Joan proves the bridge that eventually allows Turing to connect with his team. Norwegian director Morten Tyldum's ("Headhunters") material has a built in ticking clock, but he builds drama and suspense intertwining his three time lines, capping them all with a heartbreaking finale that addresses all three. The race to break Enigma is compounded with a spy in the team's midst, the very man Turing revealed his true nature to on the eve of his engagement to Clarke. Success breeds something else again as Turing realizes all will be for nought should the Germans learn what they've accomplished. Conspiring with Stewart Menzies (Mark Strong, "Sherlock Holmes," "Before I Go to Sleep") of the newly formed MI6, who orchestrates in shadow, the team must watch in silence as thousands, including one of their own, go to their preordained deaths. Cumberbatch's portrayal of Turing supports the theory that the man had Asperger syndrome yet worked to relate to others. His and Knightley's romance of the mind is quick and sparkling, a true communion. Knightley, who's broken through in more modern roles this year, has always had an affinity for period and she shines as a conservative woman of keen intelligence. Within Turing's team, 'Downton Abbey's' Allen Leech makes a mark as the most matey of the bunch. Kinnear is relatable, providing an audience point of view into Turing's story. Tyldum's crafted a fine film which argues that true genius often goes unrecognized. The movie's title comes from a party game based on the difference between the sexes which Turing used to devise a test discussed in a 1950 paper posing the question 'Can machines think?' And therein lies Turing somewhere between the two, a man whose sexuality was deemed criminal in his time and whose mind worked like no other's. Grade: