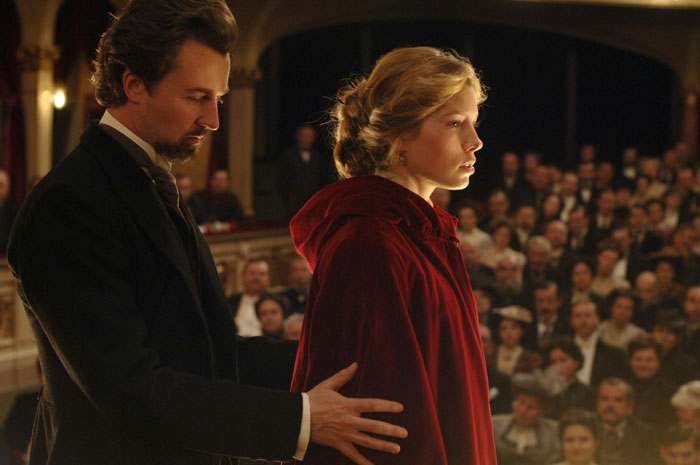 In turn of the century Vienna the son of a cabinet maker obsessed with magic and sleight of hand catches the eye of the beautiful young Duchess Sophie (Jessica Biel, 2003's "The Texas Chainsaw Massacre") and they become fast, albeit forbidden, friends. Years later, having traveled the globe, the boy returns as Eisenheim (Edward Norton, "25th Hour," "Down in the Valley") and uses his talents to free Sophie from the clutches of the evil Crown Prince Leopold (Rufus Sewell, "Tristan + Isolde") as "The Illusionist."

Writer/director Neil Burger takes quite a leap in scope from his 2002 Indie gem "Interview with the Assassin" with this beautifully styled period piece featuring a mesmerizing performance from Edward Norton and a beautifully villainous turn from Sewell. This highly romanticized mystery may look like an art film, but it's got something for everyone. Eisenheim strides onto the stage of his first performance and throws his black gloves into the audience where they fly into the rafters as ravens. He gives serious contemplation to manipulating time and space as an orange drops too slowly from one hand to the other, then plants a seed from it which grows into a tree in front of our eyes. Ecstatic reviews delight his fiscally focused manager (Eddie Marsan, "V for Vendetta"), but also capture the attention of the Crown Prince who believes he can logically debunk the illusionists tricks. The next evening, when Eisenheim asks for a volunteer not afraid of death, the Prince rises - and offers his fiancee, Sophie. Eisenheim immediately knows the woman is his lost young love, although she initially fails to recognize him (and it must be said that Biel is better matched to the younger character's actress than Norton is to his). The Prince invites Eisenheim to the palace to give a private performance. The following day, Sophie arranges for a secret meeting in a carriage, but they are seen by one of Chief Inspector Uhl's (Paul Giamatti, "Sideways," "Lady in the Water") men. In the pocket of the Prince, Uhl reports the infraction and the Prince, already planning to belittle Eisenheim's 'tricks,' now makes it personal. Eisenheim, of course, outwits the Prince with a neat twist on the Excalibur legend, but Sophie is frightened. She rides out to warn him later that night and the two become lovers (in an effectively shot scene well paired with Phillip Glass' score) who wish to run away together, if only the Prince wouldn't hunt them down. When a drunken Prince, who is rumored to be abusive towards women, accuses her of sleeping with her childhood friend, Sophie informs him that she will not marry him nor be part of his plot to overthrow his father. One of the Prince's advisors witnesses him stride after her outside with drawn sword, then Sophie's horse depart with her inert body slumped over the saddle. When her body is found in a river, a grief stricken Eisenheim backs Uhl into a struggle between his ambition and his guilt and taunts the Prince by conjuring speaking ghosts during his performances. Burger's film has a fairy-talish familiarity and the design decision to use sepia toned photography accentuated by fog machines and silent film style iris transitions may seem obvious, but everything, including modernist Philip Glass's score, all blend into a richly beautiful spectacle. If there is a nit to pick here, it is that some of Eisenheim's illusions seem too technically advanced for the time. Otherwise, locations are ideally chosen, art direction superb and costume and makeup really enhance the characters, particularly Sewell's Prince. He gives one of his best performances to date as the plotting Prince who 'is too intelligent for his own good' and reacts badly when things don't go according to his well laid plans. It is Norton's intensity, though, which fires "The Illusionist" through to its last twisty moments. Norton isn't an exceptionally good-looking or powerful man, yet he exudes a sexy magnetism and power as Eisenheim, even through mournful tears. Biel's lush looks paint her well as a period beauty and she doesn't wilt acting against these too. It is the usually wonderful Giamatti who doesn't quite convince here, his New Yorkese strangling his Viennese accent. "The Illusionist" is a lush looking puzzle box of a film grounded by a vivid, sharp performance by Norton. Even if you figure out its mysteries, the cards are played with aplomb.