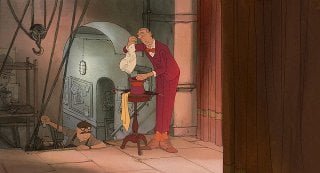 In 1959 London, magician Jacques Tatischeff is still performing his pre-war rabbit-out-of-the-hat routine, but after three encores by rock band Billy Boy and the Britoons, his audience has almost completely fled. Forced to seek out less urban locales, Jacques ends up performing in a pub in a remote Scottish fishing village where he captures the imagination of teenage charwoman Alice. He's surprised to find her stowing away for his next engagement, where he hopes to take Edinburgh by storm as "The Illusionist."

It's been seven long years since French writer/animator Sylvain Chomet broke onto the scene with the enchanting and utterly original "The Triplets of Belleville." As his followup, he's taken an unproduced screenplay by Jacques Tati, reportedly written for his estranged daughter, to pay more explicit homage to its author. While "The Illusionist" isn't the discovery that "Belleville" was, it is a magical tale, gorgeously brought to life and a true collaboration between two artists. It does has its small faults, but its cumulative effect is of the sweetest kind of melancholy. Just like "Tripets," Chomet begins with a black and white prologue set in Paris where we see Tatischeff (modeled on Tati and using his real name) collide between curtains with a highly stylized chanteuse (cigarette holder, sharp shoulder blades) as he hunts down his runaway bunny. After his London flop, he packs up his poster from the theater's glassed in case and heads to the train. A small boat takes him to his destination, piloted by a kilted Scotsman whom Chomet tickles with animated wind to answer the age old question. The feeling he evokes in the small, cramped pub is like something out of "I Know Where I'm Going" or "Local Hero," a sense of warmth among locals with quirky habits (a bald light bulb is treated like a grand theatrical accoutrement). Alice keeps peeking in on the performer, who tips her by pulling coins out of her ears. When he gifts her with red shoes to replace her shabby boots, a whole new world presents itself to her. As if Edinburgh weren't enchantment enough (the animator's pallet gets the city's mood just right), Alice is floored by the chic shops and the chic women who patronize them. Jacques is alarmed to note that she is now enamored of a pair of heels. He's not exactly flush and Alice is paying her way by cooking in the room he's booked at Little Joe Hotel. Alice makes friends with the other outmoded performers who stay there - a tumbling group, an alcoholic ventriloquist and a suicidal clown. The meat of "The Illusionist" takes place here as the older man's downward spiral presents an unlikely liftoff for a better life for Alice. The film is basically silent - Chomet voices the Scots with an amusingly incoherent rumble and the international bent of the Edinburgh hotel guests is defined by sound effects rather than words, although a few creep in. Tati is most obviously evoked when Jacques enters a theater playing "Mon Oncle," then runs out from the opposite angle Tati is exiting the movie screen. Jacques and his fellow performers try new ways of making ends meet (how 2000's!) for some slapstick comedy, but a scene where he works an overnight shift in a garage is a bit muddled and overextended. Alice begins a new relationship with a handsome student she spies across an alley (her expectation that he will buy her something she fancies in a department store, a less than sentimental commentary on the father and daughter relationship between her and Jacques. The rabbit presents a few scares ('lapin' being one of the few discernible words used). "The Illusionist," which is also perfectly scored by Chomet, may have its dips but its ending soars with a triplet of scenes. Jacques's ironic note that 'Magicians do not exist' is followed by a shot of the empty hotel room where a book's pages ruffling in the breeze paint a shadow play on the wall. Simply magical.

In his fourth outing behind the camera, writer-director-producer-star George Clooney brings us a fast-paced political thriller that is obvious at times in its plotline but makes up for it with an amazingly talented acting ensemble. Clooney’s Morris is an important character but the director wisely uses him sparingly. The focus of the film is on Stephen as he makes the political journey, behind the scenes, from idealist to jaded politico. This is an actor’s film first and foremost and Clooney elicits strong performances across the board. Ryan Gosling is having one hell of year with three films out this year and he gives a solid arc to Stephen Meyers. Philip Seymour Hoffman and Paul Giamatti are in fine fettle as the opposing campaign managers who wheel and deal in the political world to garner endorsements and get votes. The dog-eat-dog world of politics at the presidential level calls for good amount of cynicism and their Paul Philip and Tom Duffy characters demonstrate this beautifully. The rest of the fine cast – including Evan Rachel Wood as a campaign volunteer who gets in trouble, Marisa Tomei as a hardboiled political reporter, and Jeffrey Wright as an ambitious senator who wants to use his political influence to parlay electoral votes for Secretary of State, if Morris wins – flesh out their characters to make this a true ensemble effort. Techs are expert with sharp-edged camerawork by Phedon Papamichael, capturing the excitement of a presidential campaign, and a music score by Andre Desplat . Production is first-rate across the board. “The Ides of March” harkens back to political campaign films such as “The Best Man (1964),” “The Candidate (1972)” and “Primary Colors (1998).”