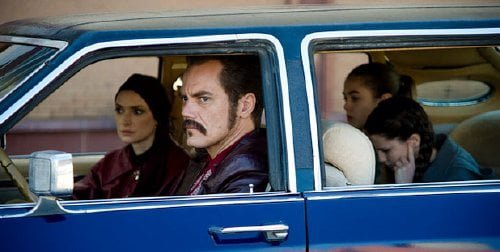 Richard Kuklinski (Michael Shannon) is a happily married family man with his wife, Deborah (Winona Ryder), and two daughters, Anabel (McKaley Miller) and Betsy (Megan Sherrill). He tells everyone that his business is currency exchange but, in fact, he is a contract killer working for the Mafia families in New York with over 100 kills under the belt of “The Iceman.”

Unbeknownst to his new wife, Richard Kuklinski (Michael Shannon, "Take Shelter") was supporting his family by duping porn movies. One night, he gets a panicked call from his boss Dino (Danny A. Abeckaser, "You Don't Mess with the Zohan"), telling him to get out immediately before their enraged, mob-connected customer Roy Demeo (Ray Liotta, "The Place Beyond the Pines") shows up. Rich is too late, but when he doesn't flinch even while Roy holds a gun to his head, Roy decides to contract him for the killings that will make him known as "The Iceman." Michael Shannon has made a career playing deeply disturbed men, some who've even murdered, but "The Iceman" marks his first portrayal of a clear cut sociopath. In this loosely adapted (by Morgan Land and director Ariel Vromen) version of Anthony Bruno's 'The Iceman: The True Story of a Cold-Blooded Killer,' Shannon, who bears no likeness to the real Kuklinski, convinces as a serial killer who can don the face of a family man one minute and butcher bodies the next. His inner rage only escapes when his family is threatened. Kuklinski had a hard and fast 'no women or children' rule. The true story might tell otherwise (Kuklinski physically abused his wife), but Vromen streamlines, hinting at the parental abuse which formed his nature with flashbacks to visits to brother Joey (Stephen Dorff, "Somewhere"), imprisoned for the rape and murder of a young girl. Just what's hinted at here is horrifying. There's also irony - Kuklinski maintained a strong divide between home and 'work,' but one friendship, a decades-long one with Dino, caused the inadvertent slip that brought him down. This is foretold during a rare couples night out. Rich and Deb (Winona Ryder, "Black Swan") join Dino and lesser acquaintance Terry (Ryan O'Nan) and their wives at a restaurant and one of the women casually mentions the porn bootlegging the men have been involved with. Deb's face clouds over - wasn't her husband printing cartoons? Shannon's face clouds over as well, but there is a storm behind his. Vromen cuts between moments like these and the life Kuklinski hides from his family. There are several chilling moments - his 'audition' for Demeo, who asks him to kill an innocent man on the street; his partnership with Mr. Freezy (an almost unrecognizable Chris Evans, "Captain America: The First Avenger"), with whom he casually butchered bodies; his cyanide 'sneeze' hit on a dance floor - but only once does he allow his Kuklinski allow the facade to drop with his family. Vromen's story has an underlying theme of loose lips - Demeo's most trusted henchman, Josh Rosenthal ('Friends' David Schwimmer, scuzzy and meek), goes down for the same reason - but one wishes he'd stuck closer to the facts and dug deeper into Kuklinski's makeup. Kuklinski had killed many before he even met his wife-to-be, for example, and his moniker's explained by one tossed off comment. Kuklinski's claim of having killed Jimmy Hoffa goes unmentioned. But if one's content with a slightly revised straight ahead biopic, "The Iceman" does the job. (I was thinking someone could make a dark comedy television series with this material and call it 'The Iceman and Mr. Freezy,' except that Mr. Freezy was actually Mr. Softee in real life.) The film's period production depicts the 70's as dreary and dingy, Kuklinski's neat, middle class split level having far more curb appeal than interior homemaking cheer. Haim Mazar's score features the identical sighing wah-wah doom of Brian Reitzell's work for television's 'Hannibal.' Should you come out of the theater wondering why James Franco took a very minor role as one of The Iceman's victims, the answer is two-fold. That Franco loves to pop up in weird places is the obvious one. That his character's killing is the only one Kuklinski expressed some remorse for is the second. And this is the problem with Vromen's telling - he recognized the importance of this killing, but neglects to explain why.

Michael Shannon, from the first time he came to my attention in “Revolutionary Road” (for which he received an Oscar nomination), is an actor of great intensity. That intensity is on display with his sociopathic Richie Kuklinski, a man living a double life as husband, father and killer. Richie works for Roy Demeo, a mobster affiliated with the Gambino crime family in New York. He proves his mettle to Ray when the gangster orders him to kill a homeless man. Richie coldly dispatches the poor guy and shows he has the right stuff to be a hit man. As Richie’s criminal career grows and prospers, his home life is equally successful as he moves the family to more expensive digs and he drives a big, expensive Lincoln Continental. He maintains the sham of respectability for decades and, in the process, made over 100 gang hits, but there is more. The body count is likely much higher when we see Richie murder a victim, just because he can. Eventually, in this adapted rendition of real-life killer Kuklinski, Richie goes too far and is eventually taken down and convicted to five consecutive life sentences. Israeli-born filmmaker Ariel Vromen and co-scribe Morgan Land used two sources to construct the story of Richard Kuklinski: the book The Iceman: The True Story of a Cold-Blooded Killer by Anthony Bruno and the documentary “The Iceman Tapes: Conversations with a Killer” by James Thebaut. Unfortunately, the adaption of those works falls short of expectations. The acting is solid with Shannon showing his Richie as a cold, cruel man who is a volcano waiting to erupt. One scene in particular demonstrates the sociopathic nature of the man when, after a fender bender with a hot-headed driver, he, with his family in the car, begins a high speed chase through the city’s busy streets after the guy for insulting his wife. The terror they feel is more than matched by his single-minded need for violence and revenge. The supporting cast is sprinkled with all sorts of acting talent with “Goodfellas” Ray Liotta as the conduit through which Richie gets his “jobs.” A nearly unrecognizable Chris Evans is creepily amusing as fellow hit man Mr. Freezy who uses his ice cream truck as a cover. He and Richie make a deal to do hits outside the confines of the Mafia bosses. Winona Ryder is decent as the clueless wife oblivious to her husband’s deadly career. David Schwimmer (where has he been?) is mob lackey Josh Rosenthal, a man not destined to great things. The rest of the cast does a competent job filling out their characters. James Franco and Stephen Dorff make cameo appearances, with Dorff playing Richie’s imprisoned brother Joey. The screenplay does not play as well as the actors occupying it. There is something shallow about the way the plot unfolds with jumps in time, shown through the always changing facial hair of Richie. The 105-minute run time seems rushed as the filmmakers try to pack in decades of crime, time and events, glossing over much of the history of the period (1960s through 1980s). It is a good character study by Michael Shannon but, in the end, “The Iceman” was just not satisfying as a whole.