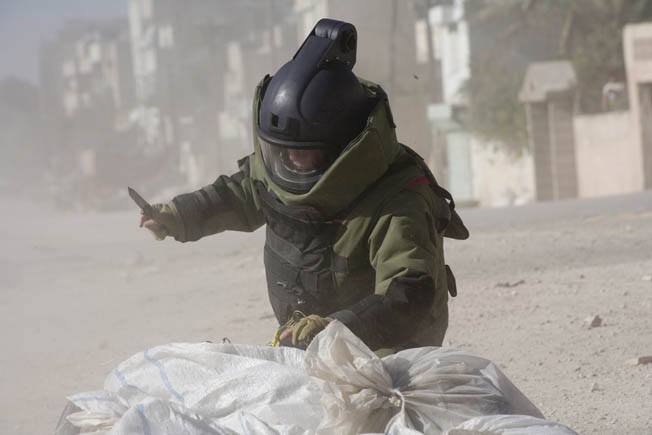 Baghdad, Iraq. The best of the Army’s best, the elite, highly trained bomb disposal unit has the most dangerous job in the world: find, disarm and destroy the insidious and deadly IEDs (improvised explosive device). When their leader, Sergeant Matt Thompson (Guy Pearce) is killed on one such mission, his replacement, Staff Sergeant William James (Jeremy Renner), soon arrives to take over the team. However, his fearless but reckless risk-taking begins to have an adverse affect on his subordinates, Sergeant JT Sanborn (Anthony Mackie), Specialist Owen Eldridge (Brian Geraghty), in director Kathryn Bigelow’s “The Hurt Locker.”

With 38 days left to serve in Bravo Company's Detection squad, Sergeant JT Sanborn (Anthony Mackie, "Half Nelson," "Notorious") and Specialist Owen Eldridge (Brian Geraghty, "We Are Marshall," "An American Crime") are faced with a new leader in Staff Sergeant William James (Jeremy Renner, "Dahmer," "North Country"), a Southerner with a devil-may-care attitude and an adroit way with bomb defusing who plunges his team into "The Hurt Locker." This compelling and visceral film is both a marvel of action and tension and a complex three-way character study. Written by Mark Boal, who spent time entrenched with an EOD unit, this is without a doubt director Kathryn Bigelow's ("Near Dark," "K-19: The Widowmaker") best film to date, one which should be Oscar nominated in every category it's eligible for. The film opens with Sergeant Matt Thompson (Guy Pearce, "Memento," "The Proposition") competently leading Sanborn and Eldridge to a potential IED site. A video-camera wielding robot gets close enough to detect the device they're after, but when it is sent out a second time hitched to a wagon containing detonators for the controlled explosion the squad is aiming for, a wheel falls off. In goes Thompson in a special suit (one that makes its wearer look like a robot himself, Robbie the Robot in an alien landscape), but just when Sanborn and Eldridge begin to relax, a butcher with a cell phone is spotted and although he behaves like he doesn't understand their intent, it becomes all too clear what his is. Pearce is so believable and comforting in this role it is shocking to lose him so soon, but the point has been made about the hair trigger nature of this most perilous job. Boal and Bigelow have also laid down the routine, if it can be called that, approach to the job and the crap shoot that is 'going to Plan B.' Imagine Sanborn and Eldridge's surprise when on their first outing with James, he seems to jump right into Plan C. Eschewing the robot altogether, James suits up and walks down a long, narrow street to investigate himself, casually tossing off a smoke cannister behind him that obscures him from view of both foe and friend. This after he has introduced himself to Sanborn by telling him he has no intent of taking Thompson's place as he plays driving metal rock and removes a barrier from a compound window. As Sanborn struggles to rein James in, to follow the procedure experience has proven, Eldridge waffles in his fear to make it home. Is James a real life hero or a nut job who is going to get him killed? Renner's performance is strongly informed, a masterful representation of cool-headed professionalism housed within a cocky jock. When Eldridge delivers on a command to bring more ammunition during a tense moment, Renner's James commends him with the slight formality of someone who has to remind himself that lesser mortals need praise. Later, when Eldridge, now emboldened in James's image, makes the right decision in shooting a possible bomber, the 'good job!' that follows is delivered with real feeling. A well-written subplot that has James bond with Beckham, a street hustling kid selling DVDs, shows the character in a more caring and humanistic light than his actions on the job. As Mackie plays Sanborn, there is no question of the character's bravery, but James's cool disregard for safety rules infuriates him. Mackie takes out his frustration with an admonition for James to never, ever cut communications again. Later Renner will literally 'ride' Mackie, making their tension palpable, before also defusing it just as neatly as a bomb in the field. When we see him stateside near film's end, Renner makes us marvel at James's ability to appear so normal. In addition to those already noted, Ralph Fiennes is another strong supporting player as a hot jock British contractor caught with his men by enemy fire. The film is a marvel of technical achievement as well, from the incredibly photographed opening blast to the you-are-there location shooting, crackerjack editing and sound design. Bigelow's direction underscores her keen observational eye, ability to pull her audience into the action and sensitivity to the psychological undercurrents of Boal's material. There is a trendy theory being floated by some that "The Hurt Locker" is a remake of Bigelow's ex-husband James Cameron's "Aliens," using bombs instead of slimy toothy beasties, and while the comparison is apt in the scene pictured on the film's poster art, overall it's rather pat. "Aliens" is a classic, but it is the interplay of the three main characters and the different way each deals with his situation that gives "The Hurt Locker" its beating heart.

This is the follow up prequel/sequel to the 2012 “Snow White and the Huntsman” but has little to do with Snow White and her story. This time around, we have sister queens Ravenna (Charleze Theron) and Freya (Emily Blunt). Their life together is one where Ravenna takes care of her sibling, who has no magical powers in evidence. That is, until Freya secretly marries and has a baby. That is when a horrible fire takes her baby’s life, unleashing Freya’s power as the Ice Queen. The death changes the kind and loving Freya, whose motto becomes “Love is a lie. Do not love!” and is orders this upon all of her subjects. She abducts all of the children in her kingdom to make fierce warriors called Huntsmen. Enter young Eric (Conrad Khan) and Sara (Niamh Walter), the best of the first generation of Huntsmen. Jump ahead seven years and Queen Freya and her army conquers the surrounding kingdoms. But something happened between Eric and Sara over these years and they fall in love, against the direct order of the queen. This is where the bulk of “The Huntsman” sets its focus where the rebellious pair takes on the mission to find the missing, now evil, Magic Mirror and destroy it. Most of the runtime of “The Huntsman” is spent on battles of varying degrees and these are well-handled with lots of hand to hand combat with swords, spears and bows and arrows. That Sara “never misses” with bow and arrow is telegraphed to expected results later. Hemsworth, Theron and Nick Frost, as dwarf warrior Nion, return for the prequel/sequel. The rest of the principal cast is new to what (at the end of the film) is a planned franchise. Jessica Chastain is nimble in her physical role as Sara and acts the first-class warrior. Rob Brydon is Nion’s diminutive partner, Gryff, and the pair – along with femme dwarves, Mrs. Bromwyn (Sheridan Smith) and Doreen (Alexandra Roach) – provide the film’s comic relief and bravely help the heroes in their quest. Emily Blunt looks regal and beautiful but her character lacks real sympathy. Special effects are good – I like the goblins, well, not like, but they are cool and very nasty – although I have seen them done better. The battle sequences are fast and furious, which is good for someone, like me, who has tired over the superhero/fantasy film franchises that have replaced originality with visual effects. It kept me occupied, at least, for a couple of hours. Fanboys, who will love the fighting, and fangirls who have three prominent figures of feminism as the stars of “The Huntsman: Winter’s War” will likely enjoy it. But, it left me underwhelmed.