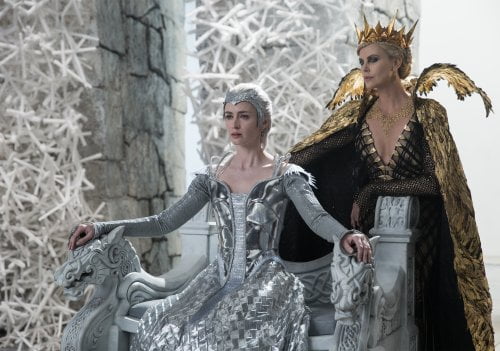 A war between sister queens, both powerful sorceresses, escalates as they each vie to take over the other’s kingdom. This rivalry brings huntsman warriors Eric (Chris Hemsworth) and Sara (Jessica Chastain) into the battle in “The Huntsman: Winter’s War.”

This is the follow up prequel/sequel to the 2012 “Snow White and the Huntsman” but has little to do with Snow White and her story. This time around, we have sister queens Ravenna (Charleze Theron) and Freya (Emily Blunt). Their life together is one where Ravenna takes care of her sibling, who has no magical powers in evidence. That is, until Freya secretly marries and has a baby. That is when a horrible fire takes her baby’s life, unleashing Freya’s power as the Ice Queen. The death changes the kind and loving Freya, whose motto becomes “Love is a lie. Do not love!” and is orders this upon all of her subjects. She abducts all of the children in her kingdom to make fierce warriors called Huntsmen. Enter young Eric (Conrad Khan) and Sara (Niamh Walter), the best of the first generation of Huntsmen. Jump ahead seven years and Queen Freya and her army conquers the surrounding kingdoms. But something happened between Eric and Sara over these years and they fall in love, against the direct order of the queen. This is where the bulk of “The Huntsman” sets its focus where the rebellious pair takes on the mission to find the missing, now evil, Magic Mirror and destroy it. Most of the runtime of “The Huntsman” is spent on battles of varying degrees and these are well-handled with lots of hand to hand combat with swords, spears and bows and arrows. That Sara “never misses” with bow and arrow is telegraphed to expected results later. Hemsworth, Theron and Nick Frost, as dwarf warrior Nion, return for the prequel/sequel. The rest of the principal cast is new to what (at the end of the film) is a planned franchise. Jessica Chastain is nimble in her physical role as Sara and acts the first-class warrior. Rob Brydon is Nion’s diminutive partner, Gryff, and the pair – along with femme dwarves, Mrs. Bromwyn (Sheridan Smith) and Doreen (Alexandra Roach) – provide the film’s comic relief and bravely help the heroes in their quest. Emily Blunt looks regal and beautiful but her character lacks real sympathy. Special effects are good – I like the goblins, well, not like, but they are cool and very nasty – although I have seen them done better. The battle sequences are fast and furious, which is good for someone, like me, who has tired over the superhero/fantasy film franchises that have replaced originality with visual effects. It kept me occupied, at least, for a couple of hours. Fanboys, who will love the fighting, and fangirls who have three prominent figures of feminism as the stars of “The Huntsman: Winter’s War” will likely enjoy it. But, it left me underwhelmed.