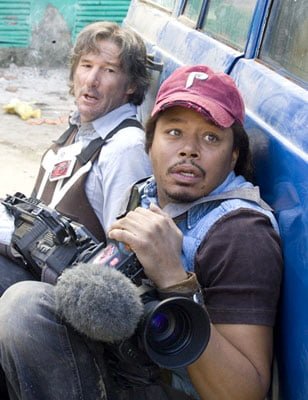 Several years ago, while covering a story in war-torn Bosnia-Croatia, television journalist Simon Hunt (Richard Gere) had a major meltdown in front of the camera and disappeared from mainstream reporting. Now, his longtime cameraman and friend, Duck (Terrence Howard), has returned to the troubled land and is surprised, to say the least, when Simon shows up in his hotel room. Duck is dumbfounded when his friend announces an impossible plan to capture the notorious Croatian war criminal, the Fox (Ljubomir Kerekes), in The Hunting Party.”

Writer/director Richard Shepard (“The Matador”) brings us a story of three men of the press – Simon, Duck and frosh journo Benjamin Strauss (Jesse Eisenberg) (the son of a network news VP) – who set out on a perilous, possibly deadly, mission to bring to justice one of the world’s most wanted war criminals. The Fox escaped capture and prosecution by the international courts following the end of hostilities in the Bosnia-Croatian civil war and went into hiding in his heavily armed sanctuary. For years, he has been the target of the CIA but they just cannot seem locate the man. Simon came back from his self-imposed isolation where he sought out every dirty little war to report on them for such auspicious broadcast outlets as Bolivian and Lithuanian TV. He proposes his wacky plan to Duck, who just so happens to be traveling on an expensive budget, and tries to convince his buddy to come along on the adventure to capture The Fox and claim the $5 million reward. When Duck agrees to go along with his friend’s mission, eager beaver new newshound Benjamin coaxes the pair to let him tag along. Borrowing” a friend’s car, Simon leads his hunting party into the heart of Croatia, where warlords rule the land. Their inquiries into the whereabouts of the Fox are met with the not so subtle warning, “The Fox is everywhere.” Undeterred by the threats, the trio ventures into the danger zone of the war criminal’s lair. Along the way, they run into all sorts of roadblocks and detours, including a harrowing confrontation with The Midget and his gang. Simon, it seems, owes the diminutive gangster a lot of money and it is only through the intervention by his old friend, Goran (Goran Kostic), that their lives are spared. Helmer/scribe Shepard uses a light touch in this adventure yarn where “putting your life in danger is actually living. The rest is television.” Cloaked in this often-funny thriller is a serious statement about the ineffectiveness of international law enforcement to actually capture the war and terror criminals roaming the earth. In the end, if three unarmed journalists can find a war criminal (read: Osama Bin Ladin), why can’t the high tech military powers of the world? This three-hander utilizes the varied and entertaining talents of its leads. Richard Gere gives just the right touch as the gonzo journo who has the crazy plan. Terrence Howard, as Duck (whose name carries an on-going gag through the story), is Simon’s anchor and the frequently unheard voice of reason. Young Jesse Eisenberg holds his own, as naïve, recently graduated journalist student Benjamin, with the veteran stars. The supporting cast is well filled with the likes of Diane Kruger, as a vengeance driven young woman who helps the trio. James Brolin is Franklin Harris, a big name news personality who epitomizes the sterility of the network media; Dylan Baker is CIA operative, Chet, who arrives on the scene to “save” Simon, Duck and Benjamin; and, the mainly central European cast that flesh out the film nicely. Techs are solid with David Tattersall providing exciting lens work to the Croatian and Bosnia-Herzegovinan locales. Editing (by Carole Kravetz), production design (Jan Roelfs), music (Rolfe Kent) and the rest help move along this fairytale-like adventure/thriller that ends in a satisfying finale. The Hunting Party” is not a serious film but it handles serious material deftly.