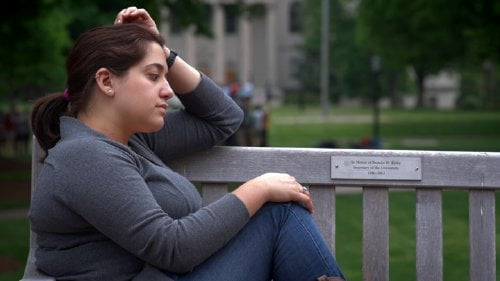 Documentary filmmaker Kirby Dick brought to public light the epidemic of sexual assault and rape, and the high level cover-up, within the US military with “The Invisible War (2012).” He turns to the subject matter again with his scathing indictment of the colleges and universities across the US and their denial that anything is wrong in “The Hunting Ground.”

Dick’s subject and his approach to it are very similar to his earlier documentary but it is the scope of the problem and its impact on the students who are sexually abused and worse that stuns the viewer. The filmmaker trots out the expected disturbing statistics, like 88% of campus rapes go unreported; 8% of college males are responsible for 90% of the rapes committed; only 26% of rapes reported to police end in arrest. The stats go on, each one more gut-wrenching than the next. But, “The Hunting Ground” is not just about the long list of statistics pointing out that there is a problem of epidemic proportion pervasive in the colleges and universities across America. There is hope in this documentary as Dick brings the stories of the victims and how they joined to fight back against university policies that deny the claims of sexual abuse to avoid losing lucrative funding from the deep-pocket corporations and alumni. Andrea Pino and Annie E. Clarke, two of the rape victims at the University of North Carolina, Chapel Hill found a portion of the United States Education Amendments of 1972, called Title IX, says, in part: “No person in the United States shall, on the basis of sex, be excluded from participation in, be denied the benefits of, or be subjected to discrimination under any education program or activity receiving federal financial assistance.” The young women used the foundation of Title IX to bring charges of sexual discrimination to some of the most prestigious colleges and universities in the country. The charges, mainly against but not limited to athletes, show how, even when irrefutable evidence is given, these prized money-makers are barely, if ever, punished for their deeds. Again, because doing so would jeopardize funding. While the nauseating statistics about rape and sexual abuse are prominent in the film, it is the dedication of the growing numbers of victims coming forth that will cause change. By the end of “The Hunting Ground,” we learn that the victim movement has brought Title IX charges to 90 higher education institutions and that number is growing.