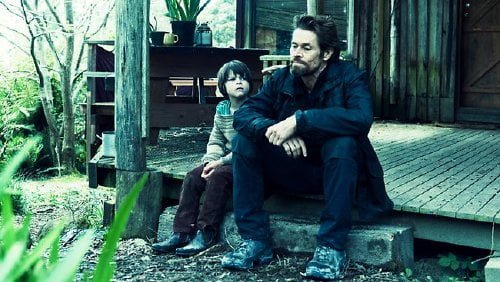 Martin (Willem Dafoe) is a skilled hunter who specializes in finding hard-to-find game. A secretive biotech company has hired his services and sent him off to Tasmania to locate and kill, for its DNA, the rarest animal of all – the long thought extinct Tasmanian tiger. When he boards with a dysfunctional family – a depressed but beautiful widow mom, Lucy (Francis O’Connor), and her two wild kids Sass (Morgana Davies) and Bike (Finn Woodlock) - they will have a profound effect on “The Hunter.”

When he's sent to Tasmania on a secret mission to bag the presumably extinct Tasmanian Tiger in order to harvest genetic material for Red Leaf, Martin David (Willem Dafoe, "Antichrist") makes it clear that he works alone. He receives a like-minded welcome from the locals who tell him in no uncertain terms that they don't like outsiders when he tries to book a room at the local pub after finding two unsupervised children, no electricity, hot running water or indoor toilet facilities at the ramshackle lodging arranged for him. And so he returns to the Armstrong home, wakes Sass (Morgana Davies, "The Tree") and Bike's (Finn Woodlock) depressed mother Lucy (Frances O'Connor, "Love and Other Catastrophes," "A.I.") from her drugged sleep and attracts too much attention, losing his focus as "The Hunter." It would be difficult not to not end up with a stunning film when it is shot on location in Tasmania and cinematographer Robert Humphreys ("Somersault") doesn't disappoint. Between all the interesting angles on Willem Dafoe's face and the lush greenery and exotic fauna on hand, there's always something to draw the eye in "The Hunter." Unfortunately it suffers from two major problems - a central conceit that screams MacGuffin and a major character, Sam Neill's ("Jurassic Park") Jack Mindy, who makes little sense. Still, there are moments of mysterious beauty and Australian television director Daniel Nettheim's wraps with a one-two punch. Taciturn Martin seems the least likely candidate to relate to children, but forthright Sass and mute Bike get under his skin with their open independence (Bike demonstrates the final action needed to get the generator going). The kids show him pictures of their dad, who ascended the same mountain he will, but failed to return. Their mother doesn't stir from her room. Jack Mindy insists on being his guide and proves useful crossing the warring loggers and environmentalists, but Martin turns him away at the half-way mark. He goes off and begins setting his traps. Alice Addison and Wain Fimeri adapted the Julia "Sleeping Beauty" Leigh novel and it suffers a bit from overemphasis in some areas (Biotech firm Red Leaf and the Armstrong's missing dad are the high tech version of the local loggers and 'greenies') and confusion in others. Just why has Jack, who's been taking care of the Armstrongs, keep Lucy in a drugged stupor - out of kindness? He clearly has aims of his own on her, yet when she hosts a party for her hippie friends, he can be seen in the cab of one of the logging trucks that show up to fire into the crowd. He seems to be both buying into to Martin's cover story of university research on Tasmanian devils and an employee of Red Leaf. But Martin's gradual attachment to the Armstrong clan is very well done, especially when he brings her back to life by banishing the drugs and cleaning her up - she comes to life like a ghost to her husband's favorite tune (Bruce Springsteen's 'I'm on Fire'), recedes, then reblooms. Bike's mute form of communication (he keeps adding to a drawing of a Tazzie Tiger) is in wonderful contrast to his sister's outspokenness. And then there's the tiger itself. Last seen in old footage from the 30's, it lives on in myth like the Loch Ness Monster. But what on earth about a natural toxin could be so specifically useful that a huge biotech firm would spend thousands - and commit murder - to obtain it? This makes no sense, nor does anyone attempt to explain. "The Hunter" springs back from its narrative deficiencies with closure both in the wilderness and civilization, crossing both against the film's general themes about human progress vs. the natural world. Dafoe makes us feel the pain on both sides of the fence.

“The Hunter” has two things going for it: the magnificent and rugged Tasmania location and the story of the search (with archival footage) for the last living Tasmanian tiger. Martin claims to be in country from “the university” to research Tasmanian devils but refuses the assistance of local tracker Jack Mindy (Sam Neill) (who seems to be abnormally close to Lucy, Sass and Bike). As Martin tries to find his elusive prey, he realizes that there is something more sinister going on when he learns that Lucy’s husband had disappeared in the wilderness months earlier on the same mission. The question that arises and is never really answered: why does a biotech firm want Tasmanian tiger DNA? The ambiguity of the answer – something to do with toxins, as is there are not enough already) throws the tone of the film off (but the ending is quite satisfying). Acting is straightforward with little character embellishment by the key players as the hunt becomes the focus of the film. Long time Aussie TV director Daniel Nettheim does a yeoman’s job with his cast and adapted screenplay (from the novel by Julia Leigh) by Alice Addison and Wain Fimeri. (Because of “The Hunter” I did go online and looked for all I could about the Tasmanian tiger.)