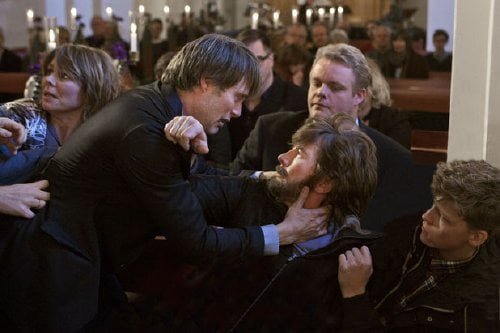 Lucas (Mads Mikkelsen) was a popular high school teacher until his school closed down. He takes a job, well below his qualifications, as a kindergarten teacher. He is a hit with the kids and all is going well until one of his students, five-year old Klara (Annika Wedderkopp) the daughter of his best friend, tries to affectionately kiss Lucas on the lips and he scolds her about showing such a display of public attention. He does not expect that a woman scorned, even a five-year, will exact revenge for being rejected in “The Hunt.”

Lucas (Mads Mikkelsen, "A Royal Affair") is just getting back on his feet after having lost a marriage and a job. He's clearly great with kids, a good thing as he's '42 and working in a kindergarten' as his ex spitefully reminds him during yet another discussion about who their son will live with. With Marcus (Lasse Fogelstrøm) slated to move in right before Christmas and a romance with coworker Nadja (Alexandra Rapaport) taking shape, everything's looking rosy until a vengeful lie is told by the least likely person imaginable and Lucas becomes the target of "The Hunt." Danish actor Mads Mikkelsen, currently just slaying as Hannibal Lecter on TV, won the Best Actor award for this role in Cannes. Mikkelsen's an actor of restraint, and cowriter (with "A Hijacking's" Tobias Lindholm)/director Thomas Vinterberg's ("The Celebration") modern day witch hunt tale gives the actor a whole range of restraint to work with in a film whose title begins literally, turns figurative, then, in a chilling coda, suggests a merging of the two. We're introduced to Lucas with his circle of male hunting lodge buddies, which includes his best and oldest friend Theo (Thomas Bo Larsen, "The Celebration"). Later, he finds a little girl lost outside the supermarket and walks her home - she's Klara (Annika Wedderkopp), Theo's daughter, and the two are clearly fond of each other. A second 'rescue' occurs on Lucas's way to work one morning, when he overhears a loud argument between Theo and his wife Agnes (Anne Louise Hassing, "The Idiots") as Klara waits forlornly outside. Lucas calls Theo and suggests he take her along to school. But later during the school day when he carefully rejects a gift, suggesting she give it to her mother, then advises her not to kiss him on the mouth (that's for family only), Klara is hurt and confused. Noticing the little girl's unusual reticence, Grethe (Susse Wold), the school dean, begins to question her and Klara, remembering the porn video her teenaged brother thoughtlessly flashed at her on his iPad for the amusement of a friend, attributes her brother's coarse observations on the actor to Lucas. In the wild, we encounter the most dangerous animalistic behavior when they are protecting their young. Add human 'intelligence' to the mix, though, and things can get irrationally ugly. It is commonly held that pedophiles receive the harshest treatment from fellow prison inmates but here we see how just the accusation is black mark which may never be fully cleared. Things start chipping away slowly. We see Grethe struggling with Klara's tale, then calling in an 'expert' (just as Lindholm's CEO does in "A Hijacking") who suggests watching for certain behaviors in other children. As parents are informed, the idea takes hold and soon Grethe has become a strident moralizer determined to protect all children, including Lucas's own son. Theo, too, 'knows' better of his best friend, but is influenced by his wife, who rejects the man she's just invited to dinner out of hand. Lucas becomes a pariah with everyone but Marcus, who tries to defend him, and Marcus's godfather Bruun (Lars Ranthe, "Adam's Apples"), a man whose home is almost literally a castle, keeping him 'above the fray.' And when little Klara tries to right her wrong, no one will listen. Vinterberg's beautifully shot film (cinematography by Charlotte Bruus Christensen of Lindholm's "Submarino") emphasizes Lucas's growing alienation with shallow focus. There is an escalation in violence, even against the innocent, which Lucas quietly protests by attending Christmas Eve church services, a beautiful emotional climax. Mikkelsen is at his very best here, his suffering evident, a sacrificial lamb of sorts who doesn't quite turn the other cheek. Equally extraordinary, given Vinterberg's perfect direction is young Annika Wedderkopp. The camera adores her cherubic face and Wedderkopp is so anxious over the dilemma she's created she breaks our heart. Vinterberg's subtlety with a holiday scene between Klara and her older brother hints that he carries the burden as well. With "The Hunt," Vinterberg has responded to his breakthrough Dogme '95 film "The Celebration," secrets and lies wrecking havoc within a social group whether they be motivated by innocence or guilt.

Director Thomas Vinterberg, with co-scripter Tobias Lindholm, creates a subtle, well-told dramatic story of a man falsely accused of the heinous crime of sexually abusing a child. We see, from the incident that sparks Lucas’s downfall, things are going to go very badly for the innocent man. Lucas is in the very middle of the raging maelstrom that little Klara created with her false accusation. The town turns against him as the accusations swell in number from other kids at the school. Lucas is guilty until proven innocent as he tries to start a new life amidst the tempest. Mads Mikkelsen, as Lucas, is a quietly subdued man who is put in the incredulous position to prove himself innocent of a crime he did not commit. The supporting cast does a first rate job as the townsfolk, including his best friend Theo (Thomas Bo Larson), turn on Lucas and start a witch hunt on the word of a child. But, the really remarkable thing about “The Hunt” is the four-star performance that Vinterberg elicits from his youngest star, Annika Wedderkopp). Hers is a totally believable performance and the director uses the little girl’s naturally expressive face for the full range of child emotions. “The Hunt,” early on, begins to twist your gut as soon as Klara’s first accusations are told to school principal, Grethe (Susse Wold). As more accusations and details of the crime come out, Lucas elicits not just sympathy but real empathy, too. The innocent man wrongly accused is something that everyone can identify with – what if it happened to me?