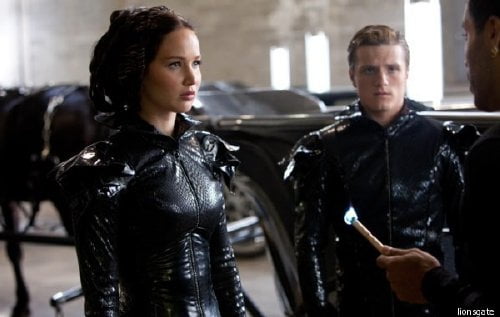 Drought, famine, riots, rebellion and war had devastated North America nearly a century ago and the12 districts of the newly emerged country of Panem are subjugated by the rulers in the Capitol. To keep the districts under control, the government ordered an annual lottery where each district appoints two teens, one girl and one boy, to be the tributes who must fight to the death for “The Hunger Games.”

The first of Suzanne Collins’s futuristic trilogy – The Hunger Games, Catching Fire, Mockingjay – has been hugely anticipated by the fangirls who have eagerly awaited the big screen release of the first of what is bound to spawn a lucrative franchise. But, while teen and tweenie femmes are the primary target audience, the adventure of the gladiatorial games will appeal to the guys, too. Surprisingly, this tale, of a blood contest where 24 tributes do battle until only the last boy/girl standing, garnered a PG-13 MPAA rating, making it accessible to the fan base. (Unlike the controversial Weinstein Company documentary, “Bully,” which received an R rating, excluding the teens it aims at from being able to see the film in theaters and schools.) Not having read any of the books, I walked into “The Hunger Games” with an Entertainment Weekly understanding of the story and the characters. With the hype the film’s debut is getting, most everyone will at least have a cursory knowledge of the futuristic tale of blood sport. I do not think you need to read the novel to appreciate the film, but it helps. As a non-fan of the trilogy, I have a number of questions that only the diehard fans will be able to answer. However, a film – even one based on a popular series – has to appeal to those uninitiated to the cautionary, futuristic vision of the fate of mankind. It is not a pretty picture and the prelude to the “reaping” – the selection of the tributes who will do battle – is done with titles, filling us in on the tumult of our society leading to the 74 Annual Hunger Games. It is a 1% ruling the 99% situation as the games have become mandatory viewing for all the civilians in the 12 districts. For the 1%, the games are mere entertainment and the filmmakers, led by director Gary Ross, show the well-to-do viewers (not the proles in the districts) as selfish hedonists who dress as if the Mad Hatter was their tailor. Acting ranges from the dramatic, with Jennifer Lawrence and Josh Hutchinson, both very good, quite serious as the team from District 12 trying to get through it all together, even though they know there is only one survivor of the mayhem. The rest of the contestants are only fodder for the games until the expected confrontation between Katniss and Peeta and the uber-tributes of District One. The body count (mostly off screen) is high but the blood-letting is minimal for this kind of film. (The similar Japanese film “Battle Royal” (available now on DVD and Blu-Ray), about high school students turned gladiators, is darker, funnier and far bloodier than “The Hunger Games.”) The camp side of the acting – Stanley Tucci as Gamesmaster Caesar Flickerman, Wes Bentley as Games MC Seneca Crane (with a precisely sculptured beard), PR flack Effie Trinket (Elizabeth Banks (Really? I said, she is so transformed by outrageous makeup and costume)) – is done for that out-there factor, making me wonder when Suzanne Collins’s future world and Hollywood’s collide is it in favor of Tinseltown or faithful to the book? I really have to talk to the fans.