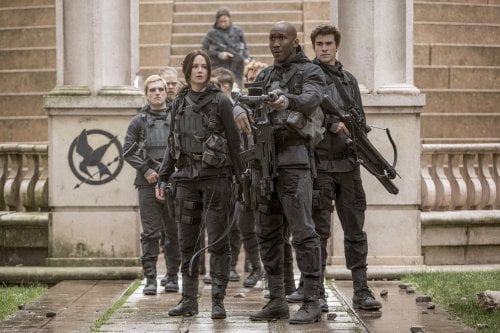 With President Snow (Donald Sutherland) determined to destroy her while Panem burns, Katniss Everdeen (Jennifer Lawrence) joins the symbolic 'Star Squad' along with Gale (Liam Hemsworth), Finnick (Sam Claflin) and Peeta (Josh Hutcherson). Squad 451 may have been created for media consumption, but Katniss's mission is real in "The Hunger Games: Mockingjay Part 2."

Well, they saved the best for last. While Lionsgates's decision to split Suzanne Collins' final novel into two parts prioritized commerce and produced a holding pattern, there is little fat in Part 2's wrapup which features a watchful, calculating Katniss dead set not only on defeating Snow but preserving kindness and equality. It is also our last opportunity to see new work from Philip Seymour Hoffman whose Plutarch is seen early but not often, the actor's death mourned anew in a late scene where Woody Harrelson's Hamitch now reads a letter, words Hoffman had prepared for but could no longer deliver. The action picks up immediately where it left off, Katniss traumatized by Peeta's brainwashing in the Capitol. But after she defies Coin (Julianne Moore) and arrives in the field, the unstable young man is sent to also join Boggs's (Mahershala Ali) special unit, a development which endangers Katniss but also raises tension with Gale (Liam Hemsworth). The squad are entering a new type of Game, having to travel 75 blocks towards Snow's palace through terrain heavily mined with pods, lethal traps set up to kill rebel forces. When Boggs is the first to be hit, he transfers his security clearance and his pod-detecting Holo device to Katniss. Screenwriters Peter Craig and Danny Strong's adaptation of Suzanne Collins' final book keeps the love and political triangles front and center, but miss opportunities to fix a few weak spots (Katniss leaves the shelter of Tigris's Capitol shop, a trove of costume and makeup, with only a hood as disguise; the abrupt resolution of a pivotal character). Director Francis Lawrence, who got the franchise on firm ground after its sludgy first installment, maintains tension throughout while giving even secondary characters, like Elden Henson's Pollux, emotional moments. The film's big climax harkens back to his Reifenstahl-inspired "Catching Fire" tribute parade, albeit one toned down in color, sleek military garb replacing outlandish costuming (well, there's always Effie). Sutherland hasn't made the most of a brief moment like this since "The Invasion of the Body Snatchers." The film suffers from a dual ending, a years jumping epilogue feeling tacked on after a perfect one-word closer, but its hard won peace, love, home and family are satisfying all the same. Grade: