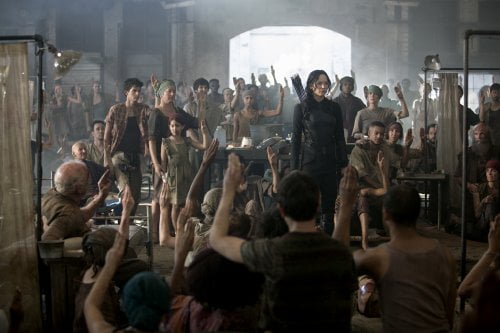 Having destroyed President Snow's ruthless games, Katniss Everdeen (Jennifer Lawrence) awakens in the obliterated District 13 to discover Peeta (Josh Hutcherson) is being used as a tool for the Capitol. The rebellion that's been simmering ever since she outwitted Snow (Donald Sutherland) in her first competition has begun in earnest and Katniss is the leader they are looking for in "The Hunger Games: Mockingjay - Part 1."

After the pageantry and exotic dangers of the Games in "Catching Fire," this time returning director Francis Lawrence ("The Hunger Games: Catching Fire") has gone all gray, grimy and dark. "Mockingjay - Part 1" is all about war and the propaganda that spurs revolution, and while it's effective, driven by an actress who's giving as much in this role as she has in her Oscar-nominated ones, the decision to chop Suzanne Collin's third and final book in her trilogy into two parts only stretches the action out enough to highlight plot inconsistencies which otherwise might have been swept under the rug. "The Hunger Games" has turned into a cliff hanger serial with long waits for the next installment, but the overall quality of the cast and production still earn it a grudging respect. These last two installments also give us the gift of the last performances from Philip Seymour Hoffman, in fine cheeky form sparring with his "Boogie Nights" costar Julianne Moore as the Alliance's President Alma Coin. When Katniss comes to after her surprise rescue at the close of "Catching Fire," her only concern is for Peeta. We are welcomed along with her to the astonishing new world of an organized rebellion, including well placed Capitol insiders like Plutarch Heavensbee (Hoffman). But many are dead, including Cinna, and many of the tributes are now in Snow's control. When she learns that Heavensbee has pitched her to Coin as the face of the revolution, the personification of the Mockingjay, Katniss wants no part of it, only desperate for Peeta's return. Coin rejects her demands - that Peeta, Johanna Mason (Jena Malone) and Annie Cresta (Stef Dawson) be rescued and pardoned (and Prim get to keep her cat, Buttercup) - but Plutarch makes a convincing argument and Coin relents. I always find it fascinating to watch a good actor play at bad acting and Lawrence pulls this off with aplomb in Plutarch's first, green-screened attempt at a 'propo' piece. It's decided she'd be more effective in the field and so a PR team led by Cressida (Natalie Dormer, HBO's 'Game of Thrones "Rush") take her to District 8, which has no more targets left for the Capitol to hit. But once Katniss has made a moving journey through the district's makeshift morgue and hospital, in come bombers to make a horrific statement. Katniss's architected studio speech turns into her own, ad-libbed Henry V St. Crispin's rally, all caught and broadcast by Cressida's camera team. The Alliance's slogan is born, quickly followed by a theme song (sung by Katniss). But once the Capitol deploys a bombing mission to wipe out the Alliance, the film stands on shakier ground. While the bombings themselves evoke the London Underground shelters of WWII, the aftermath, where the survivors (all are saved because of a cutoff warning from Peeta during one of his broadcasts from the Capitol) find above ground carpeted with Snow's signature white roses, begins to beg questions that the film could have readily answered (is only the 'hidden' entrance to the rebellions underground control center targeted? If yes, they are all too ready to give their location away). When former tribute Beetee (Jeffrey Wright) begins to jam Capitol communications, we get more techno-gobblety gook speak than "Interstellar." A ground effort to down Capitol power by bombing its dam is a great scene, but somehow even in the dark they are able to send out broadcasts? A final, mysteriously easy victory is revealed as another of Snow's nefarious plots. Lawrence, his screenwriters (Peter Craig ("The Town") and Danny Strong ("Lee Daniels' The Butler")) and cast keep us involved in the tale not only with its action, but, more importantly the evolution of its characters, but not everyone is wholly effective and some regulars are relegated to cameos here (Tucci's Caesar Flickerman, Harrelson's now sober Haymitch, Malone). Besides Katniss's conflict and taking on her new Mockingjay mantle, we have Hoffman's cheerful betrayal of his former boss, Hemsworth's acceptance of where Katniss's heart lies, Claflin's (Finnick) fear for his friends dashing his Games bravado and Shields's (Prim) future course as a doctor set. Series VIP Elizabeth Banks is the film's humor outlet, her Effie now clad in a head scarf and jumpsuit as a 'political refugee' horrified by the fashion trends of revolution. Moore, in jarring contacts and skunk hair, is a classy addition as Coin, the yin to Hoffman's yang, her authoritative, succinct calm at odds with his blustery enthusiasm. Other notable newcomers are Sarita Choudhury (Showtime's 'Homeland') as Snow's wary advisor Egeria and Elden Henson ("The Mighty") as Pollux, a particularly expressive AVOX now part of Cressida's team. The production isn't quite up to the achievements of the prior film (devastation is seen mostly in small scale, makeup simulating Peeta's gauntness is obvious, costume design has no Capitol to play with). There are still arresting moments, however, like the reveal accomplished by cinematographer Jo Willems casting Katniss in the foreground of her home district's annihilation. "The Hunger Games: Mockingjay - Part 1" is sure to burn up the box office. While "Part 1" may have been better served as one film, in Lawrence's hands, the franchise has become the gold standard of YA adaptations. Grade: