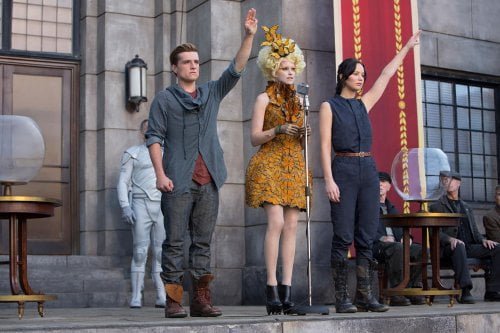 After outwitting President Snow (Donald Sutherland) with a game changer that saw two winners for the first time in its 74 year history of state mandated competition killing, Katniss Everdeen's (Jennifer Lawrence) victorious gambit reverberates further as rebellious inspiration in the districts. In a sham spectacle meant to quell the uprisings, Snow threatens Katniss to sell her romance during the 'victor's tour,' but when that fails, the 75th Games, the third 'Quarter Quell,' are architected by new gamemaker Plutarch Heavensbee (Philip Seymour Hoffman) with a twist - the tributes will be chosen from the prior victors' pool. Both Katniss and the boyhood friend she saved, Peeta Mellark (Josh Hutcherson), must return once again to fight to the death in "The Hunger Games: Catching Fire."

Well, somebody learned something since the first film was made, and I would never have expected director Francis Lawrence ("Water for Elephants") to be a franchise savior. But he and his (mostly) new team (cinematographer Jo Willems, "Limitless;" costume designer Trish Summerville, 2011's "The Girl with the Dragon Tattoo") have made a giant leap forward with this sequel and the first film's art director, John Collins, has stepped up to the plate. If there's a problem with "Catching Fire," it is that it cannot stand on its own as a film. Screenwriters Simon Beaufoy ("Slumdog Millionaire") and Michael Arndt ("Little Miss Sunshine") hue closely to Suzanne Collins' source material without bringing newcomers up to speed and then end the film in cliffhanger fashion. "Catching Fire" has greater emotional weight, higher consequences for its characters, its downtrodden masses supporting a Capital whose denizens indulge in hedonism a futuristic reflection of today's great wealth divide in the United States. If anything, Lawrence is even better here, her Katniss now caught between survival and full scale rebellion, horrified by the violence perpetrated against those who stand with her, and if Liam Hemsworth as Gale and Hutcherson as Peeta aren't up to Lawrence's acting skills, at least the romantic triangle actually feels like one this time. The schemings of Sutherland with new gamemaker Hoffman are insidiously creepy, augmented by the innocence of Snow's Katniss-idolizing granddaughter (Erika Bierman), whose words of praise unwittingly damn her heroine further. Banks, outrageously and quite beautifully turned out by Summerville, brings more depth to her perky PR handler, the Capitol's Fascist hammer flattening her fizz. Summerville also dazzles with the latest creations of Cinna (Lenny Kravitz), with a more arresting 'girl on fire' dress and a wedding gown transformation that symbolizes the entire film. The film's production design is on a much grander scale. The dimly lit colonial homes in the victors' section of Panem are like an upper middle class gated community within Panem while still in keeping with its coal mining aesthetic. Summerville outfits Capital 'peacekeepers' like jackbooted "Star Wars" stormtroopers. The futuristic train which carries the Victors' Tour is lush, its rear car offering a panorama of passing scenery (and a brief glimpse of defiant Mockingbird graffiti within a tunnel). The parade of tributes reflects both the Fascist and gladiatorial aspects of the Hunger Games, the scale recalling "Ben Hur" crossed with Reifenstahl's "Triumph of the Will." Sound is finely tuned, the hollow echo effect of Caesar Flickerman's (Stanley Tucci) microphone accenting Katniss's isolation. Willems replaces Stern's irritating shaky camera work with widescreen gloss and Lawrence chooses Katniss's entry into the 75th Games to switch to IMAX, a broad stroke (I have to assume more effective on a real IMAX screen, unlike the one at AMC's Boston Common theater). The Games themselves are not edited into the spatial confusion of the first, although they still underwhelm as mayhem, the killing of fellow tributes better represented in a moment of post-traumatic stress suffered by Katniss than by anything in the Games themselves. "Catching Fire's" Games are more about the politics of alliance, the threat of death wielded more by Plutarch's machinations than fellow players. Besides the intellectually engaged, ambitious Hoffman as Plutarch, new cast members come in the form of former Game victors, most notably Sam Claflin ("Snow White and the Huntsman") as the ambiguously motivated favorite Finnick Odair, who appeals to Katniss to 'remember who the true enemy is.' Katniss gravitates more towards underdogs, though, as represented here by Finnick's mute, elderly tribute partner Mags whom Lynn Cohen ("Sex and the City") imbues with compassionate wisdom. Jeffrey Wright and Amanda Plummer are Beetee and Wiress, a couple known more for their defensive strategies, and Plummer's unhinged madness makes for a sympathetic savant. Best of the newcomers, though, is Jena Malone ("Donnie Darko"), whose fierce Johanna Mason is the scariest competitor, despite the filed fangs of District 2's Enobaria. Most of the other tributes, though, are fodder for the nightly cannon roll call of the dead. Once again, Katniss will outwit Snow and his gamemaker, but the results are far from what she expected, raising the stakes even higher for "Mockingjay," the end of the trilogy. Willems caps her game ending move with a glorious shot of the heroine which cannot be described without spoiling its effect. The distributor's decision to jump on the profit bandwagon by splitting the final book into two movies released a year apart is dispiriting, but with Lawrence and his team already in place, hope glimmers.