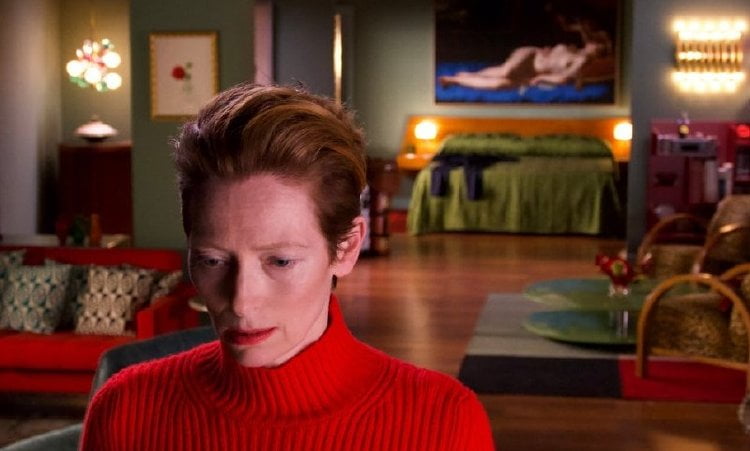 A woman (Tilda Swinton) dons several chic, luxurious outfits before stepping out in marine blue with her border collie to purchase an axe at a ritzy hardware shop.  Returning to her fabulously appointed apartment, she straightens out some blu-rays, changes into a fabulous red pantsuit and hacks away at a man’s black suit laid out on her bed with her new tool.  After taking a handful of pills, she’s awakened by the collie, determined that she answer her cell for “The Human Voice.”

Written in 1928 by French artist Jean Cocteau, ‘The Human Voice’ was first performed at the Comédie-Française in 1930 and has been adapted for film many times, most notably in Roberto Rossellini's anthology "L'Amore" with Anna Magnani (the gold standard in my opinion) and an ABC Stage 67 version starring Ingrid Bergman.  Now Pedro Almodóvar takes a crack at it and the Scot and the Spaniard have whipped up a riotously colorful bit of manic Almodóvarian melodrama.  The result is certainly eye-catching and Swinton is always compelling, but its overt artificiality, Swinton’s drop dead wardrobe and Almodóvar’s distinctive interior decor give the impression more of two friends indulging their love of fashion and design than a desire to create an emotional response.

The story is about a woman callously left by a lover of many years given the chance to speak to him once last time on the telephone, yet Almodóvar begins by silhouetting Swinton, clad in a dramatically shaped red gown, behind a frame on a stage set.  The apartment she enters has been built on this stage, its exterior exposing its stagecraft.

In many ways, the short, which is being released theatrically paired with 1988’s “Women on the Verge of a Nervous Breakdown,” is of a piece with Almodóvar’s biographical last film “Pain and Glory” with its Meta acknowledgement of itself as a film.  In fact, at first I thought this, like that feature, was filmed in Almodóvar’s apartment, his personal taste so apparent (the filmmaker tips his hats to other artists with his “Kill Bill,” “Jackie” and “Phantom Thread” blu-rays and books by Alice Munro and about Tarantino).

Swinton, here cast as a fashion model of a certain age which is currently fashionable, swings as widely as her axe, at first painting a picture of busy nonchalance before expressing her complete dependence on her lover’s presence in her life.  We can’t take her eyes off her no matter how her director’s set decoration screams for attention.  Alberto Iglesias' ("Pain and Glory") score recalls lush 40’s Technicolor noirs, creating the perfect mood.  And yet as stunningly beautiful as this version of “The Human Voice” is, it all feels a bit hollow, a self-indulgent exercise.  I was more concerned about the fate of the dog in the care of an unstable woman than the woman herself.