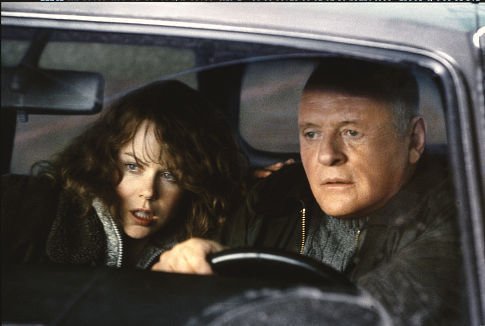 Director Robert Benton ("Twilight") paints himself into a corner with miscast leads and a story that's reveal is not linked to the central affair of the present. Sir Anthony Hopkins acquits himself well in a difficult-to-cast role, but Benton leaves the refined Kidman adrift as Coleman's white trash lover. Silk knocks on the reclusive Zuckerman's door and a quiet friendship of conversation and chess begins. Zuckerman, knowing the Farleys' history as does the entire town, urges restraint when Coleman tells him of his new young lover, but Silk is swept away by the vigor Faunia and some Viagra have restored to him. (In the film's best scene, Hopkins celebrates by engaging Sinise in a dance to "Cheek to Cheek," a scenario that could have been ridiculous if not for Hopkins' perfectly exaggerated dance moves paired with Sinise's amused and conquered reluctance.) We're shown how Coleman meets Faunia at the post office, then finds her stranded on the way to a third job at a local dairy. Offering her a ride, he's astonished when she invites him in. He says no, but changes his mind and enters the building to find her upstairs waiting for him in reclining nudity. Read no further if you wish to keep Coleman's secret and have not yet seen the film. In flashback-within-flashback, we learn that the young Coleman (Wentworth Miller, "Underworld") had a boxing future discouraged by his father, a dining car waiter who propelled his children towards higher education. Coleman has lighter skin than the rest of his Black family and passes himself and his tightly coiled hair off as Jewish. He's adored by first love Steena Paulsson (Jacinda Barrett, "Urban Legends: Final Cut"), a beautiful blonde midwesterner of Swedish background. As Coleman is never presented as delusional, a scene where he takes Steena home to meet his mother (Anna Deavere Smith, "The American President") without ever having told her the truth is utterly impossible to believe. He loses Steena and never tells his eventual wife the truth, remaining cut off from his family. Returning to the present, Coleman's further troubles begin when Faunia reveals her volatile nature. She equates sex with betrayal and feels guilt over the accidental loss of her two children in a fire. Ex-husband Lester wants no other man to have what he cannot making Coleman and Faunia's fate inevitable. Near their ends, Coleman attempts to tell Faunia his secret, which Nathan learns after the fact from Coleman's sister. Hopkins is as convincing in the role as the British actor can possibly be, but besides a matchup of eye color, he bears little resemblance to even the white actor who plays his younger self. Still, he imparts Silk with wry regret and renewed potency without ever making Coleman appear foolish. Hopkins gets at Coleman's heart when he defends Faunia to Nathan, convincing with 'She's not my first love, not my great love, but certainly my last love.´ Kidman, however, is unrealistic and overly dramatic as the doomed Faunia. Her attempt to give her voice the gravel of a cigarette habit is actorly and a cheesy perm is not enough to obscure her refinement. Faunia's huge mood swings aren't given enough context to keep Kidman's performance from splintering and Benton's judgement was sorely lacking in retaining a scene where Kidman talks to a caged crow ('We were made for each other - marry me'). Harris is too low key in a role that calls for barely contained rage. Sinise is serviceable as Coleman's friend and narrator. Production designer David Gropman's ("The Shipping News") university town and its environs evoke a Stephen King adaptation. Rachel Portman´s score is one of the film's biggest assets. "The Human Stain" shouldn't leave an irrevocable blotch on anyone's career, but the film itself is a serious misfire.

Coleman Silk (Anthony Hopkins) has led a long life of deception, re-inventing himself as a young man to something quite different from what he was. Now he is a respected dean at a prestigious New England college but, when he questions his class about a pair of no-show students, he makes the major mistake of calling the wayward undergrads “spooks.” A casual remark, normally, but not when these particular students are African-American. His wife, Iris (Phyllis Newman), vows to help him fight the ridiculous charges when she suddenly dies. Coleman is alone, his career gone and life all but ruined. But a life, even a ruined one, leaves on this earth its “Human Stain.” Philip Roth’s novel, adapted for the screen by Nicolas Meyer and directed by Robert Benton, is a story steeped in irony. Jewish Coleman is accused of bigotry and racism for slurring the color of two students. If everyone knew Silk’s past they would realize how ridiculous the charges are and there would be nothing to this tempest in a teacup. The story flashes back to a much younger Coleman (Wentworth Miller) an intelligent young man who uses his boxing skills to get a scholarship to a top university. He has a pretty blonde girlfriend, Steena (Jacinda Barrett), and an assured, successful future. Then, he goes home. Here we learn that the “white as snow” Coleman is from a black family and his stern father declares that his son will attend the nearby Negro college. Mr. Silk (Harry Lennix), a dignified train porter, leaves the table, goes to work and suffers a fatal heart attack. This tragedy cements Coleman’s resolve to follow his own plan and he trades the use of his fists for a college education. When we meet Coleman in his later years, he is white and Jewish and considered by his peers to be a bigot. He seeks out the help of a reclusive writer, Nathan Zuckerman (Gary Sinise), who has sequestered himself in a cabin not far from the school. Silk wants the writer’s-blocked author to help him clear the good name of Silk. From these professional beginning does a personal friendship develop and Coleman becomes a sort of muse to his younger friend. Then, circumstance has Coleman cross paths with Faunia Farley (Nicole Kidman), a fiery 34-year old woman who stirs a long forgotten passion in the elder Silk. Faunia has a not so nice past and the local baggage of her ex-husband Lester (Ed Harris), a violent time bomb of a man who still thinks Faunia is still his. Thinking about “Human Stain,” and reading about the true-life stories about people passing white for black, Catholic for Jew or straight for gay, I had a problem with Roth’s story of a black man working to “pass” for a Jew. Yes, there are cases of it, but in the 40’s the step up, social prejudice-wise, from black to Jewish is not the first idea that would come to my mind. This is a nit-pick, maybe, but couple it with casting Anthony Hopkins, a man as Anglo-Saxon as can be, as an old African-American just doesn’t cut it for me. It’s not that Hopkins’s acting is a problem, it is the story itself that is problematic. Then there’s Nicole Kidman’s performance as Faunia. The actress, basically, always looks pissed and chain smokes, which gives a gravelly sound to her voice but the character, as portrayed by Kidman, does not work. Hopkins gives the expected dignity to his professorial character. Sinise, as the narrator and participant, actually has more chemistry with Hopkins than does Kidman. Ed Harris, as usual, puts a solid spin on his on-the-edge character that is, perhaps, responsible for the film’s most tragic moment. Wentworth Miller does fine in the flashbacks but the casting of him or Hopkins really needed a change. Techs are, of course, of a high caliber. I really need to peruse the Roth novel to see where the problem lay but, with the film, my main trouble I could not suspend my disbelief. This is a big problem.