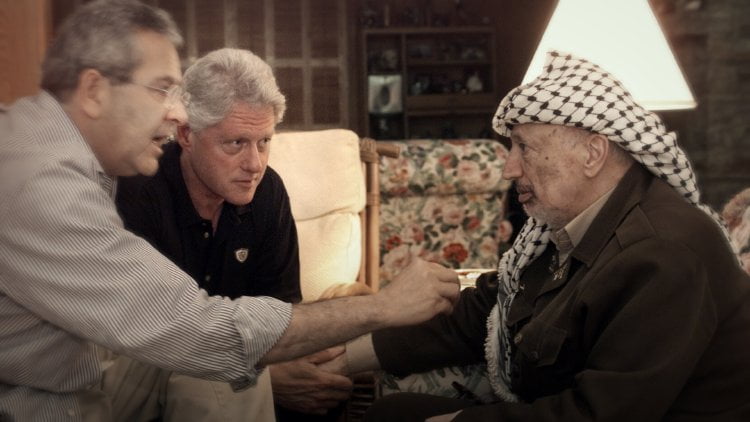 Cowriter (with his editor Oron Adar)/director Dror Moreh, whose “The Gatekeepers” examined the Israeli/Palestinian conflict from the inside out via Israel’s Shin Bet intelligence service, returns to the same subject, this time focusing on the U.S. role in Middle East peace negotiations and how they succeeded or failed based on “The Human Factor.”

Guided primarily by chief American negotiator Dennis Ross, who worked on Middle East issues from the Reagan through the Obama Administrations, Moreh charts the ever-changing landscape of political players and how these shifts affected peace negotiations.  Although the film purports to examine a thirty year period, the bulk of the film is given over to the Clinton Administration, when peace was within striking distance only to slip away after the assassination of Israeli Prime Minister Isaac Rabin in 1995.

The film’s title comes most into play when observing the evolution of the friendship between Rabin and the PLO’s Yasser Arafat – what started with the diplomatic difficulty of negotiating a handshake between the two men ended with Arafat affectionately placing his hand on Rabin’s back, then giving an emotional testament to the man after his death.  But as Aaron David Miller notes, the U.S. proceeded with its sights set on what it hoped to achieve over the realities on the ground, never having taken Rabin’s warning about Civil War seriously – negotiating with the PLO was risky business within Israel.

As we watch the parade of Israeli PMs who follow, it is always Arafat who appears the most pliable, a willingness to compromise that developed with his respect for Rabin.  The PLO leader was initially viewed only as a terrorist by the U.S. and Israel where other nations regarded him as a Head of State, so his admittance to the White House accorded him a level of respect.  When subsequent Israeli PMs appeared to slight him, as Barak did by focusing first on Syria, Arafat’s good will began to wane, culminating in the Camp David Accord where he was seriously misread.   Bill Clinton, who had considered these negotiations his mission, labeled himself a failure.

Moreh points out that the American negotiators at Camp David in 2000 were mostly Jewish – there were no Palestinian lawyers – but is he also making subtle commentary as he flash forwards through the Bush years with visuals of death and strife while the Obama years feature that President in conference rooms looking pensive?  With his “The Human Factor,” Moreh has laid out complex situation in clear terms that leave us disconsolate at what might have been just as the Human Rights Watch accuses Israel of Apartheid, calling for UN sanctions.

During the last months of the Clinton administration, Camp David was the site of the long-hoped-for peace accord between Israeli and Palestinian leaders to bring an end to the 30+ year-long struggles between two peoples. The events leading up to that failed cycle of meetings are chronicled in “The Human Factor.”

As I watched this historical documentary play out, I had the growing sense that the leaders that were negotiating the so-called peace accord had little if any empathy for the vast numbers of people impacted by their decisions. Instead, the powers-that-be were more concerned in keeping their own positions of authority and control, not helping their people.

Documentary filmmaker Dror Moreh (“The Gatekeepers (2012)”) gives us a capsulated Middle East history beginning with the 1973 peace accord where the Palestinians had a viable offer on the table – and turned it down, fomenting 30 years of struggle and strife in the region.

The concentration of the film centers on the Clinton administration’s efforts to bring the Israeli and Palestinian leaders – Yitzak Rabin and Yasser Arafat – together to make the hoped-for historic handshake. The meat of “The Human Factor” documents the political events and decisions that lead to that touching of palms.

You might want to take notes while you watch this chronicle of shattered hope just to keep up with the who’s who of negotiators, especially at the highest levels. At first, George H.W. Bush earnestly works with Israeli Prime Minister Yitzak Shamir to secure peace in the Middle East. Things look good, at first. Then the US and Israeli elections – George H.W. lost to Bill Clinton and Yitzak Rabin replaced Shamir.

From here, we get a new president, Clinton, and a new prime minister, Rabin, then another PM, Shimon Peres, then Bibi Netanyahu, and yet another, Ehud Barak. Increasingly, as the US administration plodded along, trying to get each new Israeli PM to continue negotiating on the peace accord, it looked promising. But the negotiating was riddled with strife, posturing and concern about image over peace. One example is the decision to forbid Yasser Arafat from wearing a military-style uniform (his trademark) to a summit meeting at the White House. He ignored the order and wore a uniform – publicists touted it as a “safari suit.” Everyone was happy. Nothing was accomplished.