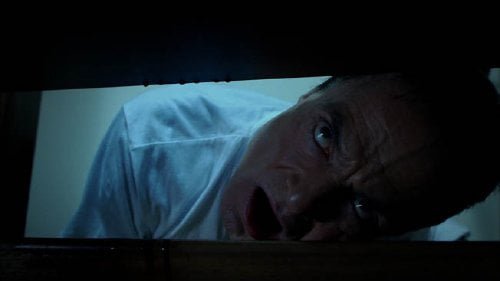 American tourists Lindsay (Ashley C. Williams) and Jenny (Ashlynn Yennie) are lost on a remote German road looking for a nightclub when they get a flat tire. Just their luck that the only car that comes by is being driven by a sweaty pervert. With no cell phone reception and no other options, the duo stumble through the woods until they come upon a house. After inquiring as to whether the two girls are alone, Dr. Joseph Heiter (Dieter Laser, "Fuhrer Ex") lets them in so that they can become part of his dream project - "The Human Centipede."

Coproducer (w/wife Ilona)/writer/director Tom Six isn't trying to horrify his audience, he's just trying to exploit them by making waves with the kind of 'top this' controversial cinema that assures curiosity. Directors like David Lynch know that chilling moments can be achieved by contorting the human body into unnatural states, but Six's bizarre idea is concocted for no other reason than to make us gag. And he doesn't even have the discipline to keep to his own concept. The film begins with Heiter, an actor who makes Udo Keir look like Mr. Rogers, sitting by the side of the road admiring pictures of his previous experiment, three Rottweillers surgically attached by their gastrointestinal systems (it looks photoshopped). When a trucker pulls over to relieve himself, Heiter gets out and bags him with a tranq rifle. Then we meet our two Americans all made up for clubbing. In a tip of the hat to Six's home country, they've bought a pair of yellow clogs from Holland for their friend Amy, perhaps to signal their stupidity, vapidity or cluelessness. Once in Heiter's clinically white home, complete with 'art' showing conjoined twins, they drink his proffered water. Apparently his establishing question of them being alone, his noting of their status as tourists and his admission that he does not like 'human beings' wasn't enough to warn them. Soon they awaken in his basement laboratory, tied to beds alongside the trucker, who now must be terminated as his bulk does not 'match' their body types. Once a replacement, the Japanese speaking Katsuro (Akihiro Kitamura) (what is this, a nod to WWII?), is obtained, Heiter explains exactly what he has in mind, complete with a little Powerpoint show. Everything that follows is stupid. Thankfully, Six only gives us glimpses of the surgery itself, a surprise considering what he clearly thinks are shock and awe tactics. He's explained that knees will be removed, but his centipede spends all its time kneeling. Lindsay manages to get away, but goes back for the completely drugged Jenny just when she can exit. And of course, there's the classic drop the weapon next to the body you could have killed off move. The film is being marketed as '100% medically accurate,' yet we are to believe that waste excreted from one person will have enough nutritional value to sustain two more. The film's complete title is "The Human Centipede (First Sequence)" in anticipation of "The Human Centipede 2 (Full Sequence)," which has a tagline of '100% medically INaccuarate.' Hmmm, can't wait. The film's ending may give "Stuck in the Middle with You" a whole new meaning, but by that time the stupidity of what we've just seen has removed any trace of nausea. I still wanted to run for the exits though.