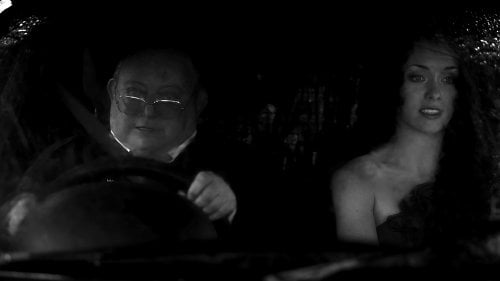 Martin (Laurence R. Harvey) is a sexually abused loner who lives with his harridan of a mother and works in a parking garage. There he stokes his obsession with a controversial horror film and plots to make the fictional Dr. Heiter's creation his own reality in "The Human Centipede II (Full Sequence)."

Writer/director Tom Six ("The Human Centipede") has made a lot of noise in interviews about how he hasn't made his sequel the same film as his first, but this filmmaker has nothing on his mind but his disgusting concept, ironically one on which he'll probably eat out on for years to come. Six has talent for exactly one thing - casting villains that have an interesting look and demeanor on film - and stage and British television children's show actor Laurence R. Harvey's Martin is admittedly an improvement on the original's Dieter Laser, a poor man's Udo Kier. Hopefully Harvey gets a shot at a better film from his exposure in this one. But otherwise, despite all the hype, the film isn't as outrageous as it's been made out to be. In fact, it's a bit of a bore. And Six shouldn't be encouraged as he has the least regard for his audience, making absolutely no effort to make anything in his film logical. There are those who will see this film regardless, whether out of curiosity or for bragging rights on a dare, but there really is no there there. Six's films are the 'As Seen on TV!' products of movies, based on a laughably lame idea designed only to milk a gullible public. Gorehounds will find nothing they haven't seen in a 1960's era Herschell Gordon Lewis exploitation film. I could go on about how ridiculous so many things in the film are, how many times Six sets up a plot point only to ignore his own rigging (just like the first film's repeated shots of the centipede in Heiter's backyard followed by a climax which emphasized the impossibility of getting them up the stairs from his basement), but the film's not worth the effort. For juvenile coprophiliacs only. (Note: for those who have read the plot points which got this film banned in the UK, yes, the U.S. theatrical release has been cut - the barbed wire rape scene has been excised but is alluded to. Unfortunately, Six has worse ideas which remain, like a pregnant centipede member.)