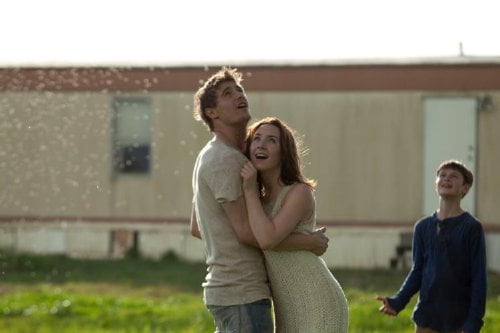 Unseen alien invaders have come to earth to take over the bodies and minds of mankind. Melanie (Saoirse Ronan) has fallen victim to the invasion and her body is inhabited by an alien named Wanderer, but she fights to keep control of her mind as “The Host.”

Following a global alien invasion, Melanie (Saoirse Ronan, "The Lovely Bones," "Hanna") is determined to hide as long as she can with her love Jared (Max Irons, "Red Riding Hood"), but when alien Seekers chase down her and her little brother Jamie (Chandler Canterbury, "Knowing"), she promises she will come back right before she is captured. With an alien soul known as the Wanderer implanted in her body, Melanie's strength of will proves problematic for "The Host." Whatever convinced writer/director Andrew Niccol ("Gattaca," "In Time") that this Stephenie Meyer novel could be made into a movie? Its primary concept - that of two beings in constant communication as they share one body is certainly a challenge and it is one that Niccol has failed to meet. The sight of Ronan speaking to herself as the alien as voice overs account for Melanie is titter inducing even before the standard Meyer supernatural love triangle is introduced. That this was intended to be Meyer's attempt at adult fiction after her YA "Twilight" series is equally baffling because it's hard to imagine a market for this outside of undiscriminating preteen girls. There is so much wrong here it is difficult to even begin. There are the Meyer touch points about faith and raging hormones, but even here the message is muddled. There is no reason given for why this alien race comes to Earth, nor why they are referred to as 'Souls' when most of them have evil intent. This is the case with The Seeker (Diane Kruger, "Inglourious Basterds"), who questions The Wanderer in order to mine Melanie's memories and find the other humans who have formed a resistance. Luckily for Melanie, The Wanderer is sympathetic to her plight and escapes rather than betray Melanie's friends. She wanders out into the desert to find her Uncle Jeb (William Hurt) and when she does it begins another quandary as most of Jeb's settlement want to put the alien to death, including Melanie's lover. Jared's friend Ian (Jake Abel, " I Am Number Four") tries to kill her, then comes around to Jeb's way of thinking - that Melanie still lives within her body. So of course, he falls in love with the alien, whom Jeb has dubbed Wanda. The most ludicrous aspect of "The Host" is that Wanda will alternately kiss Jared and Ian to determine if Melanie is around - either way the man gets slapped because Melanie hates Jared kissing Wanda and hates Ian kissing her. What's a girl inhabited by an alien life form to do? After discovering that the group, who live in the most set bound extinct volcano ever production designed, have been trying to surgically remove souls from inhabited humans, losing both in the process, Wanda decides to make the ultimate sacrifice. There's no reason given for why these aliens become addicted to fashionable white earthling garb and drive around in silver-plated Lotuses. Maybe because these things go with the glowing blue contacts sported by inhabited humans. Ronan seems to have lapsed into a good movie/bad movie cycle that she needs to break out of. Max Irons doesn't make Jared anywhere near appealing enough for all this devotion and, while sympathetic, Abel cannot help but looking foolish falling for an alien life form. As Jeb's wife Maggie, Frances Fisher ("Titanic") is one strident note. There are only two pluses to "The Host," and neither is enough to save it. Diane Kruger gives a performance of more conviction than the film is worth and Antonio Pinto's ("Get the Gringo," "Snitch") score is more imaginative than the source material he embellishes.

This is my early candidate for worst movie of the year. It takes a talented young actress, Saoirse Ronan (“Atonement,” “Hanna”) and a couple of veteran thesps (Diane Kruger, William Hurt) and wastes them entirely with a weak, often stupid story (by Stephanie Meyer) and script (by director Andrew Nicoll. The invaders have nearly succeeded in “occupying” the entire population of planet Earth. The possession of their hosts, as humans are called by the aliens, is total – both body and mind are completely taken over. One such victim, Melanie, is taken over by the alien “soul” Wanderer but something different happens: Melanie’s human mind is fully functional in the invaded body and both minds try to gain dominance of the host. What this means, on the screen, is listening to Melanie’s voice over as the she and Wanderer bicker about, what else, boys. The voice over got annoying very quickly. This is manufactured story with the sole reason being to try to foster another franchise like Meyer’s ridiculous “Twilight” series. “The Host” tries to be a science fiction allegory on fanatic religions AND tries to be a love quadrangle between Melanie and Wanderer (later named Wanda) and two hunky human guys – Ian (Jake Abel) and Jared (Max Irons). These frequent (and confusing) romantic interludes take over the bulk of the film and, when they happen, the whole thing comes to a halt. The sci-fi alien invasion, except for Diane Kruger’s yeoman-like performance as the “Seeker” chasing escaped Melanie, is mere backdrop for the love story. Production feels false with sets that look just like movie sets. This is one of the many things about “The Host” that made suspending disbelief impossible. The actors are given wooden dialog and poor direction that weighs on the movie from start to end. I keep my fingers crossed that “The Host” tanks at the box office and we never have to suffer a sequel – which is set up at the happily ever after ending.