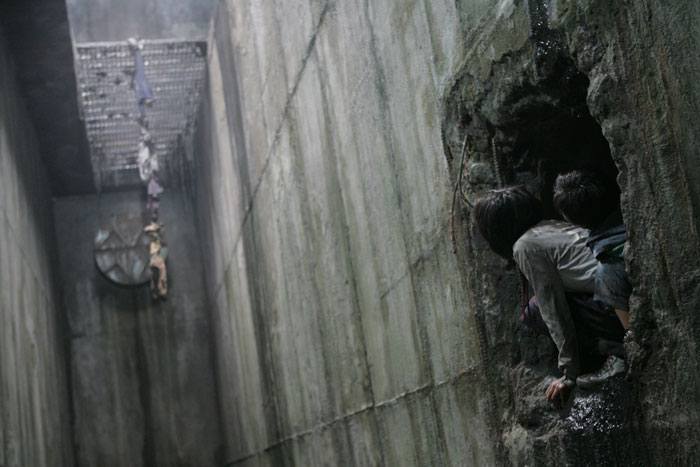 Eldest Park son Gang-Du (Kang-ho Song, "Memories of Murder") lives with his dad Hie-bong (Hie-bong Byeon, "Memories of Murder") and preteen daughter Hyun-seo (Ah-sung Ko) running the family food stand on the banks of Seoul's Han River. After school Hyun-seo joins grandad to watch auntie Nam-Joo (Du-na Bae, "Sympathy for Mr. Vengeance") compete in a televised archery contest unaware that a giant creature has risen from the river outside. When Hyun-seo ventures out, Gang-Du loses grasp of her hand and she is snatched by the monster their government soon tells them carries a deadly virus as "The Host."

Topping the box office in movie-loving Korea as the largest grosser in their history, "The Host" is a sociopolitical commentary framed within the monster genre that features elements both dramatic and comedic, not unlike director Joon-ho Bong's "Memories of Murder." But where that film resisted categorization, this latest is pure genre entertainment, featuring great special effects (created by Weta Workshop ("Lord of the Rings") and The Orphanage ("Harry Potter and the Goblet of Fire," "Sin City")). The film arrives on a wave of global buzz which began at the 2006 Cannes Film Festival and was most recently praised as part of Boston's MFA's Korean Fest that raises expectations to very high levels that couldn't be met for this reviewer. Overly long (at 119 minutes) and muddled in places, "The Host" is a fun flick which perhaps suffers a bit in translation. The film kicks off skewering U.S. military presence when an arrogant base physician (Scott Wilson, "Junebug") instructs his horrified Korean assistant to dump hundreds of bottles of formaldehyde, a biohazard, into the sink because they're old and dusty (an incident based on a true event). Two years later and some fishermen note a small ugly mutant specie in the water. Jump to the here and now and that small fish has grown into something which resembles Alien with the jaws of Predator crossed with a tadpole. Once Hyun-seo is gone, the Park family congregate at an impromptu memorial set up in a gymnasium and the family dynamic is clearly a dysfunctional one. Nam-Joo is a famous athlete but suffers from an inability to let go of her arrow at the climatic moment (a weakness she will clearly overcome in later goings). Youngest brother Park Nam-il (Hae-il Park, "Memories of Murder") is a college student with the arrogance of the young. Both siblings have no respect for their elder brother whom they regard as a slacker dullard responsible for his daughter's death. Patriarch Hie-bong is desperate to pull his family together and gives a humorous explanation for Gang-Du's personality. In mourning, the foursome end up in a squabbling heap, a piece of unexpected slapstick Joon-ho pulls off expertly. Enter hazmat suited officials, one of whom (after regaining his dignity after another brilliantly silly pratfall) instructs that anyone having had contact with the monster must be quarantined. Held against their will, the Parks soon learn Hyun-seo is still alive when she calls dad's cell phone from a sewer cavern, but no one will believe them. They escape from the hospital and must evade a man hunt while they track down their youngest in the figurative belly of the beast. After his anti-American opening, Joon-ho is quick to spread the blame around, significantly making a hero of an off-duty American Staff Sergeant while the Korean's own medical and government officials flounder and feed them lies. The Parks are the little guys up against the system and gradually they bond in their united goal. Joon-ho is more skilled with his monster action scenes than with his virus conspiracy, clearly a comment on the recent SARS hysteria. Gang-Du is recaptured and subjected to involuntary brain surgery and while these scenes are horrific their purpose is unclear. Hyun-seo's reveries can also be mistaken for reality and the film takes too long to wrap, with one missed opportunity after another leading to an overscripted climax at a riverside bioterror demonstration. A neat coda heralds the common man for taking care of his own. Hie-bong Byeon is a sympathetic and amusing patriarch and Kang-ho Song, whose bleach streaked locks represent Gang-Du failure to take on middle-class responsibility, is great as the slow-witted lumberer who finds great stores of fighting spirit. In her big screen debut, Ah-sung Ko reflects resilience and the sheer terror of anticipating the beast's next move. The host himself is beautifully rendered, a creature who lopes on land, enters the water like an Olympic diver and performs like a gymnast on the underbelly of the Han River Bridge.