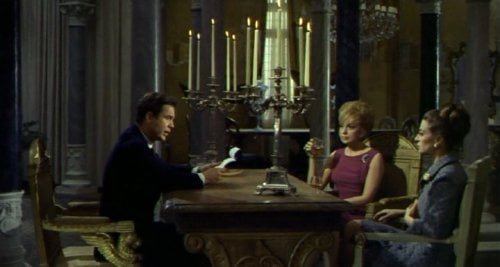 “The Honey Pot (1952)” is Mankiewicz’s homage to Ben Johnson’s 17th Century play, “Volpone,” with Rex Harrison as a debonair millionaire Cecil Fox who plans an elaborate joke on his three ex-wives. Cliff Robertson, his Man Friday, is hired to play the master of ceremonies and stage director in this complicated tale that begins as a drawing room comedy and turns into a murder mystery. Susan Haywood, Edie Adams and Capucine are the ex-wives who each has a reason to answer Cecil’s summons to his fake death bed.

This is an enormously entertaining who-done-it that, I have to admit, I did not know about. “The Honey Pot” is a bright, Technicolor extravaganza that combines good acting, a clever, complex plot, solid direction and outstanding production. Rex Harrison, who does a wonderful secret ballet in his boudoir, revels in his role as a rogue playing an impractical joke on his exes. Cliff Robertson puts an enigmatic spin as the puppet master doing Cecil’s bidding. The femme stars are pigeon-holed character-wise but each puts her own spin on their characters. Susan Haywood, in particular, eats scenery as the hypochondriac millionaire ex-wife, Lone Star Crockett. “The Honey Pot” is yet another example, little known, of the fine films of Joseph Mankiewicz and, if you cannot catch it at the HFA revival, deserves to be sought out elsewhere.