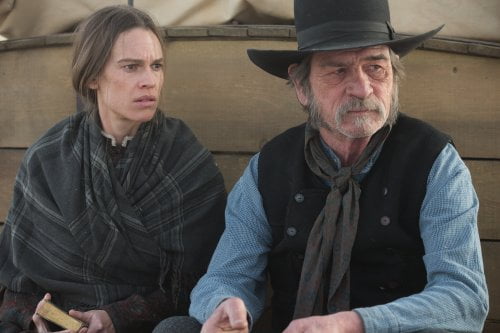 The American Midwest, before the Civil War, was a rugged, forbidding place to settle. Three women, unable to take the tough, demanding farmer’s life in a fickle wilderness, go mad. Their husbands are unable to care for them, so one woman, Mary B. Cuddy (Hilary Swank), puts her own life aside to take the arduous and dangerous mission to bring the women to safety in “The Homesman.”

Living alone on her homestead, Mary Bee Cuddy (Hilary Swank) is doing better than most of her neighbors in the newly created Nebraska Territories. But after feeding and entertaining adjoining settler Bob Giffen (Evan Jones, "A Million Ways to Die in the West"), her proposal to join land and assets via marriage is rejected because she's plain and too bossy. When three other Loop settlers' wives go mad from the hardships they face, Mary draws the straw for Vester Belknap (William Fichtner), one of the husbands who's refused to consider driving the women to a pastor's wife in Iowa for care, and gets the short one. Then Mary finds George Briggs (Tommy Lee Jones) atop his horse noosed to a tree for having jumped Giffen's claim and agrees to save the scoundrel if he'll accompany her on her arduous journey as "The Homesman." Marching decidedly to the beat of his own drummer, cowriter (with Kieran Fitzgerald & Wesley A. Oliver/star/director Tommy Lee Jones ("The Three Burials of Melquiades Estrada") has made an endearing, feminist Western that defies expectations at every turn. Adapted from Glendon Swarthout's novel, the pairing of a strong, devout woman and a scruffy, irreverent man with a taste for booze makes "The Homesman" play a bit like "True Grit" crossed with "The African Queen." The film has a few flaws that keep it from reaching the very top of 2014's releases, but it's an embraceable work with distinctive production design and strong performances from both its leads. With quick strokes, Jones establishes that in 1855 Loop, the women appear more honorable than the men. Flashbacks illustrate why three women have lost their minds. Belknap's wife Theoline (Miranda Otto, "The Lord of the Rings'" Eowyn) threw her newborn down the outhouse after their cattle all died. Arabella Sours (Grace Gummer, "Frances Ha," TV's 'Extant') wordlessly clutches a ragdoll after losing three children in quick succession to diphtheria, her young husband Garn (Jesse Plemons, TV's 'Friday Night Lights,' "The Master") succumbing to self pity. Gro Svendsen (Sonja Richter, "Open Hearts") fights her husband Thor (David Dencik, "We Are the Best!") as he drags the corpse of her only ally - her mother - to freeze out on the plains. Even Reverend Dowd (John Lithgow), who avails himself of Mary's hospitality, is unveiled as a coward clinging to his comforts. Only the local who builds Mary's wagon, complete with barred windows and interior restraints, exhibits any thoughtful support. George Briggs is something else entirely, a comical figure when first met, his face blasted in ash, his eyes peering out amidst wrinkles like an old apple doll wearing a johnny suit. Where Mary is hard-working, fastidious and compassionate, Briggs is an opportunistic drifter with a good sense of humor. The two clash at first, but eventually a sense of trust develops, Briggs impressed with Mary's bravery and patient kindness, Mary responding when he is able to face off armed Pawnees, albeit by giving them her horse. After Theoline and Arabella scuffle over her doll and Bella runs off, Briggs is faced with a second challenge, a freighter (Tim Blake Nelson) who intends to keep her, but both return. Mary's profound effect on George changes his outlook on the rest of his life. Cinematographer Rodrigo Prieto ("Brokeback Mountain") enhances the vastness of the landscape which Jones has taken pains to shift as the journey progresses. Art direction emphasizes the rough living conditions of the sparse west with the more inviting homes enabled by more heavily settled communities, a distinction also made in costume design. Composer Marco Beltrami ("Snowpiercer") devised a 'wind piano' for a score suggesting nature. Hillary Swank lives utterly in the skin of her character, a lonely woman whose charity isn't returned in kind. The terror she expresses when lost from her wagon for two days, having stopped to return a child's grave to its rightful state, is palpable and the actress builds upon that experience in unexpected ways, allowing us to look deeper. Jones's character is less easy to pin down, yet he makes his shifting choices feel right. Also good are James Spader as real estate developer Aloysius Duffy and "True Grit's" Hailee Steinfeld as Tabitha Hutchinson, the recipient of Brigg's new found wisdom. Meryl Streep appears in a small role as the Iowa pastor's wife, a representation of what Mary might have been in different surroundings. The film's flaws are threefold. The actresses portraying the madwomen only come into focus in flashback, their present day insanity a single group condition. A flashback damning Gro's husband even further is oddly misplaced. The entire subplot involving Spader's character doesn't ring true, uncompromised bad behavior to goad retaliation. Some may find Jone'ss finale odd, but its joyful perversity is right in keeping with the director's tone. "The Homesman" has been made with unique vision, alternately compassionate, funny, tragic and folksy. It may be less even than Jones's theatrical debut, but somehow it seems the greater film. Grade:

Tommy Lee Jones makes his sophomore big screen feature (his first was the rock solid “The Three Burials of Melguiades Estrada”) adapting (with Kieran Fitzgerald and Wesley A. Oliver) the novel by Glendon Swarthout. The result is new millennium stab at a genre that has been with us since the very first days of movies – the western - and it hits the mark. Hilary Swank is outstanding as the tough single (and single-minded) woman working her farm by herself. One day, the local preacher, Reverend Alfred Dowd (John Lithgow), shows up on her doorstep to mooch a meal and he tells her about the three ladies. Later, at a meeting of the preacher’s tiny congregation, none of the men are willing to rescue the mad ladies. Mary B, incensed by their behavior, volunteers to take on the months long journey to save the stricken women. Things take a turn for Mary B when she comes across George Briggs (Tommy Lee Jones), a claim jumper who was left, by vigilantes, to hang himself. Before she saves him, though, he has to promise to help her in her mission. Reluctantly, he agrees and they set off to traverse the bleak land to save the mad women. “The Homesman” is not your conventional western. The story takes unexpected and shocking turns with its heroin, hero and three mad women as the travel their dangerous road to safety. Tommy Lee Jones shows a deft hand at drama, but infuses the story with humor, too. Both he and Hillary Swank give notable performances. Swank, in particular, does a superb job in portraying Mary B Cuddy, a very complex character who hides her vulnerability under a cloak of toughness. Jones is likable as irascible rogue, George, and gives an as expected entertaining performance. I hope “The Homesman” garners the attention that the mature, intelligent film deserves. With awards season coming up and the flood of movies competing for attention, it may be lost in the crowd. It should not be.