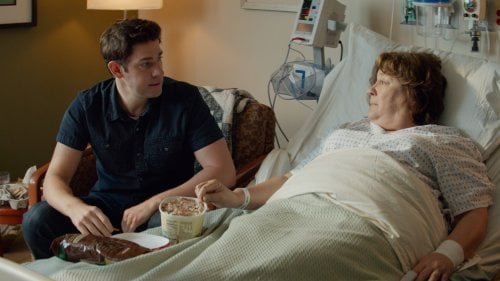 John Hollar (John Krasinski) is a struggling graphic artist in NYC. When his mother, Sally (Margot Martindale), has a fall and is diagnosed as having a brain tumor, John, at the insistence of his pregnant girlfriend, Rebecca (Anna Kendrick), makes the journey back home to Middle America. He is not prepared, though, when the dregs of his past come back to haunt him in “The Hollars.”

Struggling artist John (John Krasinski) gets an unexpected work visit from his girlfriend 'Becca (Anna Kendrick) who hands him a suitcase and informs him he has to leave, now, to catch a flight to his Ohio hometown. John's mom Sally (Margo Martindale) had a seizure that morning and her doctor has scheduled surgery to remove the tumor that's been growing for over ten years. The medical crisis means an unexpected reunion for "The Hollars." 'The Office's' John Krasinski began his directing career adapting David Foster Wallace's "Brief Interviews with Hideous Men." Now he's completely switched gears, taking on the type of twee Sundance comedy we'd expect from Zach Braff. There is little to commend in James C. Strouse's ("Grace Is Gone") screenplay outside the mother-son relationship at its core and indeed, Krasinski's best decision here was in hiring Margo Martindale whose performance is the only real reason to see this movie. Everything's dialed up to 11 in this movie, the first of two 'mom's got cancer' movies heading out of Sundance. When Sally Hollar collapses on her bathroom floor, husband Don's (Richard Jenkins) reaction is a jovial 'What are you doing on the floor, Chief?' It's eldest son Ron (Sharlto Copley, "District 9"), who's lived in his parents' basement since getting divorced, who immediately realizes something's very wrong (it later comes out that Sally's brain tumor has been growing for years, her symptoms, including partial paralysis and blindness in one eye, attributed by Ron, who sent her to Jenny Craig, to obesity - how hilarious!). Dad's business is about to go bankrupt, Ron's been stalking ex-wife Stacey (Ashley Dyke, "12 Years a Slave") and John's got some general discontentment with his own relationship although imminent fatherhood seems to be the culprit. John is the only family member Sally really talks to, but when he brings her her favorite, ice cream and pretzels, he's scolded by her nurse Jason (Charlie Day, "Horrible Bosses"), unusually aggressive because he's jealous of John's former relationship with his now wife Gwen (Mary Elizabeth Winstead, "10 Cloverfield Lane"). An invite to dinner is extended on Gwen's behalf and apparently she's been lying in wait for his return for years. Only John and Sally come across remotely as real human beings. Martindale is a wonder, elevating every scene she's in, poignant having her head shaved for surgery. The only other person to make it out unscathed is Josh Groban(!) who brings a wry patience to the proceedings as Reverend Dan, Ron's kindly arch rival. Kendrick is adorable, but she's been turned into a fairy godmother girlfriend, written into wealth she can spread around to solve all these clueless losers' problems. Copley and Day are shriekingly annoying and Winstead must really, really like John Krasinski. Jenkins' character is such a fool, one feels sorry for the actor. Also in the film are 'Fresh Off the Boat's' Randall Park as Sally's doctor and Mary Kay Place as Don's accountant sister. "The Hollars" are led by a sensational matriarch, one who recognizes laughter is more beneficial than tears. Unfortunately, she's surrounded by incompetence where only money solves everything. Grade:

John Krasinski’s sophomore film is an old fashioned family dramedy that harkens to decades past. The script, by James Strouse, touches all the typical going-back-home bases with the reason for the family reunion hinging on Sally, in a terrific performance by Margot Martindale, after her collapse. The unexpected incident, however, proves not to be the first. Over more than ten years, she showed symptoms of a serious problem, but her husband, Don (Richard Jenkins), just kept telling her, “It’s nothing.” He was wrong. The script is packed with the baggage that John carries when he returns home. He is confronted, in the hospital, by male nurse Jason (Charlie Day), who happens to be married to Gwen ((Mary Elizabeth Winstead), John’s ex-flame from high school. Ron (Shalto Copley), John’s brother, is still struggling with his divorce ffom Stacey (Ashley Dyke), lives with his parents and has been fired by his father, Don (Richard Jenkins), from the family plumbing business. Don is having financial problems and is facing bankruptcy. John has his hands full as he must face the complications of his earlier years. John Krasinski does an earnest job directing. Unfortunately, the story is overwrought with manufactured crises: John finds out that Stacey still has the hots for him and Jason is jealous. Ron cannot get over his divorce and separation from his two daughters, which prompts another family crisis. There is a lot more packed in here, probably too much. “The Hollars” has a large, veteran cast and they fill out their characters but almost to the point of caricature. The exception is the riveting performance by Margot Martindale, who, for me, is the draw here. She gives a real arc to her portrayal of Sally, a strong-minded woman who, suddenly, faces her own mortality. Her most touching moment occurs between her and John. She must have her head shaved in preparation of the operation and refuses vehemently until her son intercedes. It is a real mother/son moment and the best scene in the film. You cannot just throw everything up in the air and expect it all land in place. There is too much going on and “The Hollars” could have been reined in to have more focus. Again, it is an earnest effort by Krasinski but he needs more maturing behind the camera.