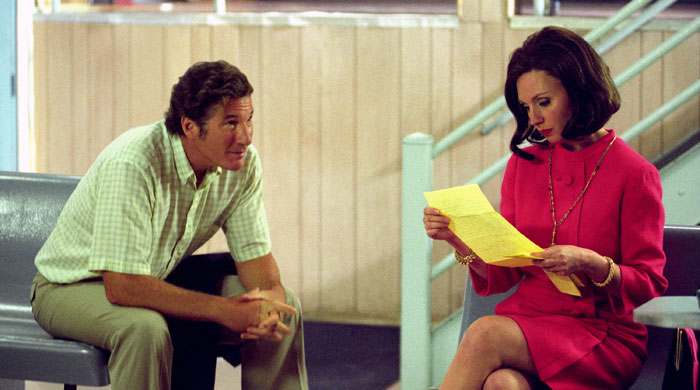 The year is 1971 and aspiring author Clifford Irving (Richard Gere) flailed and failed to get his words into print. He can’t get his latest work published and his funds are dwindling below nothing. At the same time, billionaire recluse Howard Hughes went into hiding” in his Las Vegas hotel penthouse. With such a famous personage being so secretive, Irving has an idea: write a faux autobiography by and of the celebrity hermit and pass it off as genuine in “The Hoax.”

I remember Irving’s scam and the hubbub of controversy it triggered. It was at a time when the US was mired in the Vietnam War and the hoax was a welcome diversion to a battered American public. Based on Clifford Irving’s book, director Lasse Hallstrom visits this real life swindle with Richard Gere in the role of the con artist and writer. When his deal with publisher McGraw Hill falls through, Clifford won’t let it diminish his self esteem and declares that his next work will be “the book of the century.” How he is going to pull this off is the big question for Irving, until her catches a look at a face on a magazine cover. That face belongs to none other than the richest man in America – Howard Hughes. This gives him a germ of an idea that he bandies about with his friend and chief researcher, Dick Suskind (Alfred Molina). The germ becomes a blazing fever for the author and he decides to convince McGraw Hill that he is the authorized biographer for the reclusive Hughes. How Irving was able to bring his hoax to fruition – almost – is, initially, handled in an almost light-hearted manner by screenwriter William Wheeler. He and Suskind begin to dig into Hughes’s background and uncover an unknowing accomplice to their scheme. Noah Dietrich (Eli Wallach), a long time high level Hughes employee, has written a book about the huge HH empire and it is a mother lode of useful info. This becomes the foundation for Irving’s “authorized” autobiography but he doesn’t stop with pilfering information. He and his friend use forgery, fraud and blatant fabrication to build a convincing case for the publisher and the duo’s intelligence is so good that it garners them the unheard of advance of $1000000. The bigger the lie, Clifford knows, the easier it is to believe. Richard Gere, quite good in the role of talented author and con man Clifford Irving, is surrounded by a veteran cast of character actors. Alfred Molina is a solid sidekick as Dick Suskind, who is, at first, titillated by the scam but soon fears the danger it may bring, especially when they uncover information implying a Nixon White House scandal. (If it is to be believed, Irving’s faux biography even spawned the infamous Watergate break in, putting Irving’s life in danger!). Marcia Gay Harden, as Irving’s foreign born wife, Edith, envelopes herself in the role and is a fully developed character, not just the loyal spouse. Hope Davis, Stanley Tucci. Wallach, Julie Delpy and the rest of the supporting cast fill out the background characters well. Lasse Hallstrom and his behind the camera crew do a superb job in capturing both the semi-comical drama of the hoax and recreating the look and feel of the early 1970s. The story has an I-can’t-believe-they-really-they-did-this feel that makes it more amusing than dramatic. Irving’s wry it’s always the details that undo us” attitude at the end makes “The Hoax” more mirthful than menacing, but it is a well crafted look into the mind of a true confidence artist.