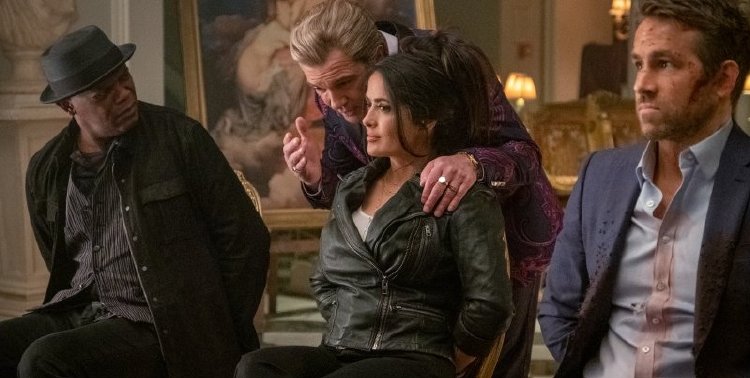 After undergoing therapy after his experience guarding hitman Darius Kincaid (Samuel L. Jackson), Michael Bryce (Ryan Reynolds) is persuaded to stop thinking about regaining his professional AAA rating and take a vacation.  After flinching at the suggestion of Tuscany, he settles on Capri, where he finds himself in the middle of a gun battle and roped into becoming “The Hitman’s Wife’s Bodyguard.”

“The Hitman’s Bodyguard” was a sporadically amusing action comedy that worked because of the odd couple chemistry of Jackson and Reynolds paired with a few exciting set pieces.  As Kincaid’s wife Sonia, Salma Hayek also kicked up the comedy in her brief appearances, so one would expect that more Hayek would be a good thing.  While that is indeed true, screenwriter Tom O’Connor (“The Hitman’s Bodyguard,” “The Courier”) hasn’t stepped up at all on the action plot which features so many extreme CGI explosions they become boring in their repetitiveness.  He’s also decided to crib the “Fast & Furious” ‘family’ theme which adds a bit of comedy but is hardly original.

Despite his apparent hatred for Kincaid, the insecure Bryce is a bit tickled to learn he’s been requested when Sonia grabs him off his lounge chair amidst a hail of gunfire.  Still, he reluctantly heads to Zagreb with her to free Darius from the notorious Carlo, only packing mace per his therapist’s demands to quit the guns.  The threesome will nabbed by Bobby O'Neill (Frank Grillo), an agent from Boston temporarily working for Interpol at the behest of Inspector Crowley (Caroline Goodall).  O’Neill had depended on using the now deceased Carlo to break up the scheme of Greek billionaire Aristotle Papadopolous (Antonio Banderas), whose anger at the European Union’s sanctioning of his country has led him to plot the destruction of its infrastructure grid.  O’Neill decides to use the Kincaids instead by passing off Sonia as Carlo’s British mistress to get the data juncture coordinates Papadopolous is depending on.

This leads to the film’s best scene, a suspicious comment about Sonia’s age being far greater than Carlo’s usual women’s setting off Hayek’s talent for stringing together expletives while kicking serious ass.  (It also allows for the brief return of Richard E. Grant as Bryce’s former hedonistic client.)  The rest of the film, though, is given over to Bryce’s need for acceptance (based, we learn, on mommy and daddy issues) crossed with Sonia’s desire for a baby, both continually crosscut with chase scenes in tourist-ready locations along the Italian coast.

Returning director Patrick Hughes recycles gags from the prior film, like Bryce and Kinkaid’s ability to be oblivious amidst mayhem and the use of nuns to exaggerate off color humor.  There is nothing here, though, that stands out like “Hitman’s” Amsterdam sequence.  Freeman, Reynolds and especially Hayek are entertaining as always, but most new additions, like Banderas, Freeman and Grillo, are disappointing.  Better are Tom Hopper (TV's 'The Umbrella Academy,' 'Game of Thrones') and Kristofer Kamiyasu as AAA rated bodyguard Magnusson and hitman Zento, a duo set up as standards for our protagonists to shoot for and Alice McMillan ("The Souvenir") as Grillo’s translator Ailso, underutilized but notable.

Five years ago, Michael Bryce (Ryan Reynolds) risked life and limb to protect hunted assassin Darius Kincaid (Samuel L. Jackson) from nefarious forces. Now, Darius’s beautiful con artist wife, Sonia, has to rescue her beloved and recruits Michael, even though he is on sabbatical and cannot use mayhem in any way, in “The Hitman’s Wife’s Bodyguard.”

BING, BANG, BOOM!!! That’s what I got out of this buddy action flick reprising the success of the 2017 original and brings back together the three likable (in a weird way) characters. There is buried, deep within the near non-stop car chases, shootouts, daring deeds, exciting rescues (there are several) and a whole lot of mayhem, an oddball family flick.

Unfortunately, the plot is sloppy, introducing multiple bad guys that are decimated by our heroes. These layers of henchmen are dispatched by the dynamic trio leading to Mr. Big - his name is really Aristotle Papadopolous, but the role is so two-dimensional and clichéd that the “Mr. B” moniker suits him better.

Expect nothing new (well, a little bit) but a lot of disconnected CGI action with the expected results. Fortunately, the chemistry between Michael, Darius and Sonia helps to give the bombastic, action packed story its fun quotient. It needs it.