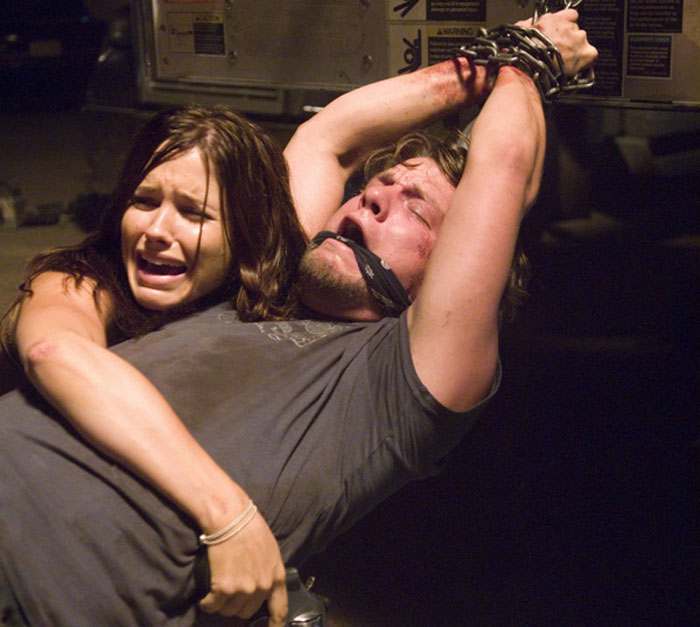 Grace (Sophia Bush) and Jim (Zachary Knighton) are a happy-go-lucky young couple on a extended road trip to meet her friends during spring break. Jim, driving his vintage Olds 4-4-2 at night during a hellacious rainstorm, must frantically swerve the car to miss hitting a man standing out on the road. Shaken by the 360 degree spinout, Grace begs Jim to leave the apparently stranded driver and he, feeling guilty, does. They don’t know it yet but they will soon again cross the deadly path of “The Hitcher.”

College sweethearts Jim (Zachary Knighton, "The Prince & Me") and Grace (Sophia Bush, "Van Wilder," "John Tucker Must Die") are excited about a Spring Break trip where Grace will introduce Jim to all of her friends. They set off in Jim's 1970 Oldsmobile 442, but their journey and more will be derailed when they cross paths with "The Hitcher." Producer Michael Bay takes his third stab at remaking an American horror film with first time feature director Dave Meyers and delivers his third tepid result. While some pains have been taken to modernize the screenplay (adapted by Jake Wade Wall who did the same for 2006's "When a Stranger Calls"), Meyers cannot sustain the film past its first hour and any smart updating cannot obscure dumb character choices and the villain's inexplicable motivations. When the couple almost hit a stranded man standing in the middle of a New Mexico highway ('Welcome to the Land of Enchantment') on a dark and stormy night, they're at odds as to how to respond. Jim wants to help the guy but Grace thinks it's creepy that he hardly flinched when they almost clipped him. As the hitcher approaches their vehicle, they speed off. Unfortunately for them, the guy gets a ride and stops to make a call at the same gas station they've stopped at. As Jim attempts to slip away, he's fingered by the clerk who identifies him as the person who just reported an immobilized motorist. A smiling John Ryder (Sean Bean, "The Lord of the Rings") introduces himself and asks for a ride to the nearest motel. Jim is cornered. Grace isn't happy, but even she is taken aback when Ryder switches from charming stranger to threatening sociopath. Incredibly, the two manage to eject the guy from the moving car, but Grace's cell phone tumbles with him. Of course that's not the last they'll see of him and Wall devises interest by having Ryder set the couple up as the perpetrators of his bloody crimes, including a slaughter in the remote local police station where they are incarcerated. But the action is continually undermined by repetition and stupidity. Guns are made available to the couple, who never check to see if the weapons are loaded (even though Ryder has preceded them) and Jim decides to leave the sexy safety of a shared motel room shower to find an outside pay phone alone. Lieutenant Esteridge (Neal McDonough, "Minority Report," "Flags of Our Fathers"), the cop who is smart enough to deduce that a third party is to blame for the couple's alleged crime spree is too stupid to gain their trust and get them into custody. Perhaps most perplexing of all is that Ryder's motivation is attributed to a death wish, a not very compelling reason for a sadistic, unrelenting and murderous frameup. Knighton proves likable enough to be the everyguy lucky enough to sport Bush on his arm, but the couple's plight should be more involving than it is. Both the villain (Bean) and the cop (McDonough) are guilty of choosing one facial expression and sticking with it, and the grinning cypher and clear-eyed captain of course end up being one note. Meyers stages action and stunts well enough, but doesn't build much in the way of suspense. Production values are so so. The filmmakers have unwisely chosen to kick off with a splattered bunny bit that distracts with its subpar CGI FX. Sound is muddy throughout. About the best things to say about 2007's "The Hitcher" is that it isn't entirely awful and that it will make the 1986 edition, a film marginally well-received in its day, seem like a classic in retrospect.

When I heard that a remake of that taut, dark psychological thriller from 1986, “The Hitcher” starring Rutger Hauer, C. Thomas Howell and Jennifer Jason Leigh, was about to come out, my reaction was Why?” The original was a genuine nail biter as unwitting everyman Jim (Howell), whose act of kindness of picking up the title character (Hauer), begins an escalating nightmare of violence and murder. There is a steady ramping up of tension, dead bodies and mistaken accusations by the police against Jim as he tries to stop his hitchhiker’s cat-and-mouse game of mayhem. Rutger Hauer devoured the role of the hitcher, John Ryder, and created a truly memorable movie monster. Howell gave dimension (surprise!) to Jim and the always terrific Leigh adds something to every role she plays, “The Hitcher” included. This flick has stayed with me over the years and I’ve only seen it once or twice. So, why am I going on about a 20 year old movie when the remake is in theaters now? Because, the remake of The Hitcher,” in a word, sucks. For the record, I first checked my watch at the 27 minute mark, then again at 39 minutes, 47 minutes, 54minutes,63 minutes, 71 minutes and so on until I could finally escape as the final credits began to roll. There is little, if anything, the remake brings to the table to evoke any interest for me. It has a pair of nice looking victims in Sophia Bush and Zachary Knighton but the actors have little screen presence and no chemistry. Their lack of experience is telling. Sean Bean has the right look and demeanor as the deadly John Rider but the thesp is hamstrung by a script that makes him simply a juggernaut of death without rhyme or reason. Twice he mouths the words “I want to die” but the way the character is written and his senseless murder spree gives not a clue to why he behaves so badly. The rest of the cast is, basically, fodder for Ryder’s blood lust and should have been given a number to help sort them out in the background. Director Dave Meyers, working with a script by Eric Bernt, Jake Wade Wall and the original’s Eric Red, lacks the panache as a helmer to give us anything new or different in this remake of a far better movie. There is a mindlessness to the new film that draws its characters as stick figures, rather than flesh and blood people. If you see one bloody corpse, you can plan on seeing many more as Ryder miraculously covers ground to be in the right place at the right time to continue his reign of terror and blood shed, including wiping out most of the local police constabulary without getting a scratch. The killer is a monster without personality. The new “The Hitcher” is a case of “why?” Why bother remaking a cult classic? Why didn’t the filmmakers give an original take on the material instead of a checklist of the reproducing the older film’s much more stylish slaughter? And, why were such bland leads used instead of capable actors? We won’t get any answers but I suggest you rent the 1986 “The Hitcher” and appreciate its black humor and mayhem.