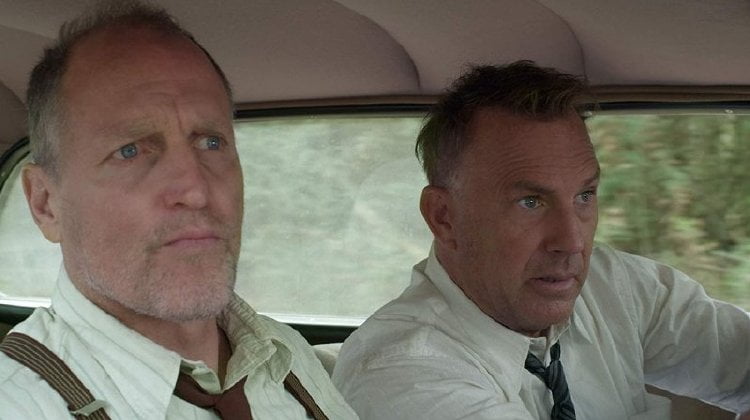 Back in the 1930s, Bonnie and Clyde were rural American folk heroes, renown for their many bank robberies and daring, often deadly, escapes from the law. But when the duo arrange a violent prison break for members of the Barrow Gang, the governor of Texas, “Ma” Ferguson (Kathy Bates), orders an end to their crime and murder spree in “The Highwaymen.”

After the Barrow gang engineers a successful breakout from Eastham Prison Farm in 1934, killing yet another lawman, Texas Governor Ma Ferguson (Kathy Bates) had had enough, enlisting retired Texas Ranger Frank Hamer (Kevin Costner) to end the multi-state crime spree of Bonnie Parker (stuntwoman Emily Brobst) and Clyde Barrow (stuntman Edward Bossert).Hamer and his old partner Maney Gault (Woody Harrelson) gave pursuit, employing tried and true police tactics as “The Highwaymen.” Writer John Fusco’s (full disclosure - my first cousin, once removed) passion project, which originally had a Paul Newman and Robert Redford attached, is all about setting the record straight about the legendary Texas lawman poorly portrayed in the romanticized 1967 film “Bonnie and Clyde.” It is a quiet film, delving into the relationship of these two older men, teasing out one final detail about their relationship until a crucial moment, while also taking a hard look at the dubious American celebrity culture that thrived even back in 1934. Director John Lee Hancock (“The Blind Side,” “The Founder”) accentuates the vastness of central United States covered by the gang and their pursuers, Ford V8s traveling long, flat roads from Texas to Iowa, New Mexico to Ohio (at one point Hamer and Gault discover Barrow’s driven 450 miles since the night before). Until that last, rural road in Louisiana’s Bienville Parish, Bonnie and Clyde are portrayed by distinguishing physical characteristics, Parker first ‘seen’ as a bad leg being dragged behind a good one, Barrow by a scar on the back of his neck. Bonnie’s crossing a field outside Eastham Prison where she will stand spraying gunfire into the trees as the prisoners they’ve come to collect make their break. It is that prison’s chief, Lee Simmons (John Carroll Lynch), who is sent to collect Hamer, who, in turn, looks up his old partner. But when Hamer arrives at Gault’s, viewing the man sitting on the steps head in hands, a sign proclaiming bank ownership of the humble home, he changes his mind and reverses course. Later he finds Gault, freshly dressed in a suit and hat, sitting on the curb by his car in town. He’s not drinking, Gault assures Hamer. The two begin to put their heads together, Gault amazed by new crime fighting techniques like wire tapping and air surveillance. They meet young officer Ted Hinton (Thomas Mann), who knew and liked Bonnie Parker back in the day. Hamer insists he needn’t pull the trigger, as long as he’s able to make a positive identification, Parker’s fashion influence creating a smokescreen of doubles. Maney’s fidgety chatter and continual bathroom breaks are at odds with Hamer’s taciturn stillness but we can see what makes them click, Hamer’s silent analysis given detail by Gault’s verbalized ponderings. Hamer’s detected a pattern in Barrow’s traveling, one fashioned to confound lawmen who could not cross state lines, and his instincts prove correct when the question the father (W. Earl Brown) of gang member Henry Methvin. It is not until the night before their famous stakeout that we learn the genesis of Hamer and Gault’s partnership, Gault telling it over a poker game as Hamer broods outside. It also proves the source of Hamer’s earlier hesitation, something he atones for the next day with a line so familiar it may go unnoticed. Hancock’s meat and potatoes direction gives the film an even, steady pace, but what it lacks in excitement it makes up for in characterization. The climactic gunning down of Bonnie and Clyde is still shocking, but it is capped with an even more ghoulish scene of the hordes of souvenir seekers who paw at the bodies when they’re towed into town. Grade:

From a folk culture standpoint, America’s view of the murderous exploits of Clyde Barrow, Bonnie Parker and their partners in crime has been through the glamour lens of Arthur Penn’s 1967 classic, “Bonnie and Clyde.” That film played up the Robin Hood aspect of the killers, romanticizing their criminal deeds instead of vilifying them. It was, with the political unrest caused by the Vietnam War and the questioning of authority, a film of its time. Director John Lee Hancock and scripter John Fusco give an entirely different look into the Bonnie and Clyde legend, this time through the eyes of the two Texas lawmen sent to end their spree. Originally, a decade ago, Robert Redfrord and Paul Newman were cast to play the characters of Frank Hamer and Maney Gault, but life and death stopped that project. Now, Kevin Costner and Woody Harrelson take on the roles of Hamer and Gault and, while I thrill to the idea of Redford and Newman together again, both give solid and effective performances. Hamer is a man of few words who does not suffer fools well, while Gaunt is the more pragmatic and mirthful of the pair. The actors play, convincingly, the men whom they embody. The story is structured as a police procedural, at least for Hamer and Gaunt, as they get into the minds of their deadly quarry, often missing them in scant minutes. Their case, like the film, is a slow and steady investigation to bring an end to Bonnie and Clyde. The gradual build, of course, leads to 30 seconds of gruesome action as the hunt, and the lives of the famous couple, come to an end. John Fusco’s story is, at its core, homage to Hamer, who was treated quite differently in the ’67 classic, and the writer sets the record straight about the honor, integrity and bravery of the man. Kevin Costner is just the right actor for the role. Woody Harrelson, while second banana as Maney Gault , is the perfect foil for Hamer, giving humor to what would be a straightforward procedural. While Costner and Harrelson are the stars and main figures in the story, director Hooker fills out he background figures to be real people. Kathy Bates, as Texas Governor Miriam “Ma” Ferguson, and John Carroll Lynch as Texas head of prisons Lee Simmons, have little more than cameo roles, but they and the rest of the cast give dimension to their characters. The period production, from costume to firepower and getaway cars (Clyde Barrow supposedly even sent a letter to Henry Ford praising his Ford V8 automobiles), are spot on. “The Highwaymen” looks and feels of the time of the Great Depression, capturing the public fervor for their folk heroes, the diminutive Bonnie and the handsome Clyde. This new millennium look at the crime couple deglamorizes them and shows them to be cold-blooded cop killers – though Bonnie was not as bloodthirsty as depicted here. It is a good bookend to Arthur Penn’s film. Between the two, we may have a near complete story of the legend of Bonnie and Clyde.