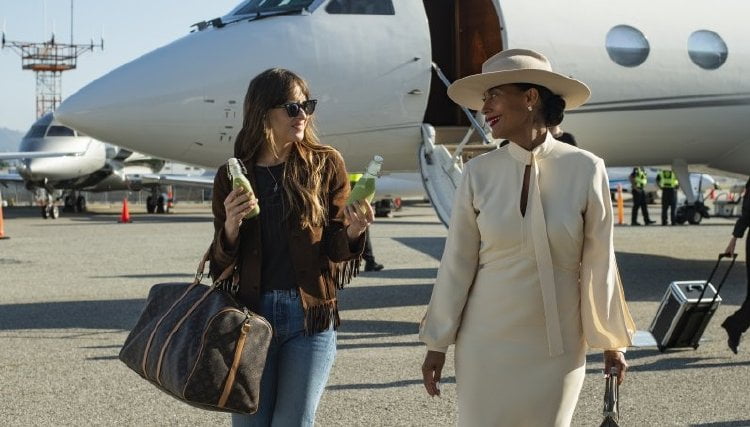 The daughter of an LA radio DJ, Maggie Sherwood (Dakota Johnson) has music running through her veins and is still thrilled with her job as the personal assistant to music icon Grace Davis (Tracee Ellis Ross, TV's 'Blackish').  Ironically, both of these women are facing obstacles, though, Grace’s manager Jack Robertson (Ice Cube) wanting the middle-aged singer to play it safe with a Vegas residency while Maggie’s new found dream of becoming a producer is only taken seriously by a new talent she’s lied to in “The High Note.”

It is fitting that screenwriter Flora Greeson wrote this while employed as an assistant in the music industry, a former boss helping to get it greenlit, but while the film gets a bump from a neatly yet unexpectedly tied together closure and a charming turn from Johnson, it suffers from a hokey setup, some poor dialogue and shallow characterizations.  It is notable that while the film offers some strong musical standards and interesting covers, that much of the original music is instantly forgettable, the songs written for David Cliff’s (Kelvin Harrison Jr., "Luce," "Waves") character more interesting than those given to Grace Davis.    And although Ross says her character is not based on her famous mother, it is interesting that the first song we hear her character perform is titled ‘Stop for a Minute,’ a slight remodel of ‘Stop in the Name of Love.’

Grace, who’s been secretly mixing the live tracks chosen for her boss’s latest album, wears a smile on her face as she runs about LA doing errands before picking Grace up from her private plane.  She’s as dismayed as Grace when Jack pushes for Vegas, but when she dares to voice her opinion, thinking Davis ripe for new material, it is Grace herself who knocks her down.  Later, lost in her music at the market, Maggie is approached by David, a young flirtatious man who happens to be playing in the store’s parking lot.  Impressed, Maggie suggests she might be able to help.

And that she does, David’s tracks produced by a friend so appalling it’s laughable, performing alchemy with his songs.  In a bid to prove herself to Grace, Maggie makes a gamble, convincing Davis’s record party opening act Dan Deakins (Eddie Izzard) to step aside at the last minute so she can substitute Cliff.  Her gambit blows up though, her admission to being Davis’s assistant and not a professional producer causing David, now also her lover, to turn on his heel.  When Grace discovers she’s to go on without an opener, Maggie is fired.

This continual behavior – Grace seems to encourage Maggie only to slap her down – is a major flaw in the film, making the character appear sadistic.  Jack’s character is also oddly defined, Grace proclaiming him a lifelong friend, yet the manager seeming only to want what’s easiest for himself and not best for his client.  Both characters turn around completely in the film’s third act.  Better is Maggie’s contrasting combination of insecurity and ambition, a confusion born of being on the inside yet low on the pecking order.

Johnson has a facility for speaking softly while acting boldly, a trait that serves her character well here.  It is surprising we haven’t heard Ross sing on screen before, the actress as comfortable in the performing realm as she is portraying the ‘bubble’ of celebrity.  The multi-talented Kelvin Harrison Jr. can add singing and romantic lead to his list of accomplishments with his appealing turn here.  Also noteworthy is “The Long Shot’s” June Diane Raphael as Grace’s live-in hanger-on Gail, favored with Greeson’s best piece of writing as an unrepentant leech whose attempt to take down Maggie has the opposite effect on Grace.  Bill Pullman charms as Maggie’s dad Max.

Director Nisha Ganatra ("Late Night") makes great use of locations like the Capitol Records building, Neil Lane Jewelers and Catalina Island.  Maggie’s Chevy Nova is the perfect vehicle to establish her status in wheels-obsessed LA.  Costume designer Jennie Eagan designs an elegant wardrobe for Ross including a red fringed gown and chic suits, but a more Bohemian look for Maggie.

“The High Note” is a more benevolent take on the star/underling dynamic of many films that have come before it with a surprise up its sleeve which you may not see coming and which helps to alleviate some unfortunate flaws.

Maggie Sherwood (Dakota Johnson) has been the loyal assistant to long-time pop star, Grace Davis (Tracee Ellis Ross), for three years. But Maggie is more ambitious than to just want to live in the shadows of a diva. She wants, more than anything, to live her dream and become Grace’s record producer in “The High Note.”

Think “A Star is Born,” but change “star” to “fledgling record producer” and that approximates the story of Maggie and her muse, Grace, who, at over 40, struggles to remain relevant in the music business.

While Grace is the “larger than life” presence in “The High Note,” the story is really about Maggie and her aspirations. She is a hard worker and dedicated to Grace, always there at her beck and call. But, her boss is demanding and expects Maggie to be laser focused on Grace, not on Maggie.

While the main story is about Maggie and her hopes and ambitions, there is also a parallel tale focused on Grace and her career. As I said, she is over 40 and “only five women over 40 have had a number one hit, and not one is black.” She has not put out an album in a decade and she, pressured by her manager, Jack (Ice Cube), has to decide on an offer by a Las Vegas casino – a ten year contract, no tours and a permanent gig in Sin City. Is it good for her or a big mistake? That is the question that Grace must decide.

But, as said, the main story is Maggie as the hard working young woman with a whole bunch of talent. Her story rises and falls on the whims of Grace, which gives Maggie even more resolve to grab her dreams. Along the way, she meets a likable young guy, David (Kelvin Harrison Jr.), who also happens to be a musician (and stinking rich, though we do not know why) who Maggie wants to help mentor. This nicely done romance, because of the likable young stars, leads to its own surprise – which I, pleasantly, did not see coming.

“The High Note” is a glitzy, feel good about yourself movie that is an amiable journey in a pop fantasy world. The heroine, Maggie, is a smart, talented young woman and a good role model for girls who want to follow their own dreams.