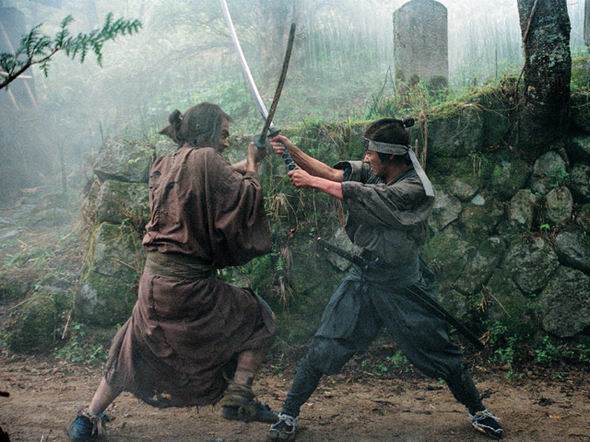 During the mid-19th century, Japan was at the cusp of a new era. The traditional ways that had ruled the country for hundreds of years are fast being replaced by the modern ways of the West. Munezo Katagiri (Masatoshi Nagase) is an honest low-level samurai and a member the distant northern Unasaka clan as it is drawn into the modern western technology made available to the ruling Shogunate. But, there are other issues facing Munezo, like love, honor and loyalty in “The Hidden Blade.”

Munezo Katagiri (Masatoshi Nagase, "Mystery Train," "Suicide Club," "The Sea Is Watching") is a bachelor samurai living with the shame of his father's suicide over a failed bridge project, a failure he was not responsible for. His reputation sinks lower when he rescues his former maid from an abusive mother-in-law, carrying the ill woman right past her husband on his back. Gossip forces him to return the woman he secretly loves back to her farming family and then he is pulled into another intrigue which tests his honor - ordered by the clan to kill old friend Yaichiro Hazama (Yukiyoshi Ozawa, son of conductor Seiji Ozawa), he will use the technique taught to him by their old fencing master, "The Hidden Blade." Director Yôji Yamada brings his cowriter and entire "Twilight Samurai" production crew back to create a marvelous companion piece to that earlier film. The story is similar, the look of the film and 1860's period the same, but "The Hidden Blade" has its own set of characters who are every bit as engaging in their own right. Simply put, Yamada's film is old-fashioned in the very best sense. He is a great story teller and director of actors. Once again we have a central romance across castes involving a divorced woman, although this time, it is the lowly samurai who is of higher ranking. There is also a reversal of the sister who is married to the best friend, as here it is Munezo's friend Samon Shimada (Hidetaka Yoshioka, "The Sea Is Watching") who marries his little sister Shino (Tomoko Tabata), a pretty girl not as accomplished as Kie in skills or moral fiber. Political intrigue abounds in the conflict between the old guard who hold their traditions sacred and the new, western way of warfare (which also figured "Twilight Samurai" and which here, is occasionally depicted as borderline slapstick) and in the underground rebellion up north which Hazama is arrested for. Munezo is also horrified to learn that the Senior Retainer, Ogata (Nenji Kobayashi, "The Twilight Samurai"), has done what he would not - taken Hazama's Wife (Reiko Takashima) for his pleasure in return for a promise of clemency he does not intend to keep - and Munezo is compelled to fight for her honor just as he is sent to kill her husband. But the heart of "The Hidden Blade" is the unspoken romance between Munezo and Kie (Takako Matsu), and just as in "Twilight Samurai," they are two special characters we become invested in seeing end up together. Yamada obviously has great sympathy for the poor and powerless, as he paints the corruption of officials, callousness of middle class merchants and imperiousness of city slicker sensei with a damning stroke and yet he acknowledges his 'bumpkins' lack of sophistication with a number of affectionately comedic scenes (trying to shoot a canon or trying to catch a chicken, the latter scene eerily reflected in Hazama's prisoner's basket). "The Hidden Blade" is slightly lacking in some of its supporting players, the friendship between Munezo and Samon not as complex or noteworthy as Seibei's with Iinuma. Hazama's background is never deeply felt, but when he escapes his prison, Yamada captures his intensity like Kurosawa's Lear, Lord Hidetora Ichimonji. Once again, cinematographer Mutsuo Naganuma shoots an epic tale in 1:85:1 aspect ratio, but his intimate moments - Kie lying sick in the dark, Munezo moving a brazier towards Hazama's wife, kneeling outside - are beautiful as are his frequent cherry blossom cutaways.

Sam Elliott is the icon of rugged good looks and deep, gravely voice (and splendid mustache) but is best known for his supporting roles. Director Brett Haley and co-scribe Marc Basch change that with a moving character study of a man, once famous, who nears the end of his life. Sam Elliott brings that character to life in Lee Hayden. Lee spends most his time smoking pot with his old acting buddy, Jeremy (Nick Offerman), and hanging out. During one of his frequent visits to his pal, he meets Charlotte (Laura Prepon), a striking beauty who is Lee’s kindred spirit. She agrees to attend the award ceremony with Lee and he performs an act of chivalry, giving the award to a fan in the audience. The act is videoed and, 2,000,000 views later, Lee becomes hot property (sort of) again. “The Hero” belongs to Sam Elliott in his full bodied performance as the once famous star who tries to find a new life, even as the end draws near. His supporting cast, though small, helps flesh out the film and their characters. Nick Offerman gives the appropriate laid back humor as Lee’s former-co-star-turned-pot-dealer best buddy Jeremy. I had a problem, at first, with Laura Prepon as the possible love interest for Lee – too young. But, the actress makes the role her own and by the end, I was on her side. Krysten Ritter, as Lee’s long estranged daughter, fares less well in a two-dimension role. Katherine Ross, in large glasses, is hidden in the background as Lee’s ex, Val I compared myself, to my wife Laura, with Sam Elliott. We both have deep voices, mustaches (mine with beard) and both of us are darned good looking. She disagreed with the comparison.