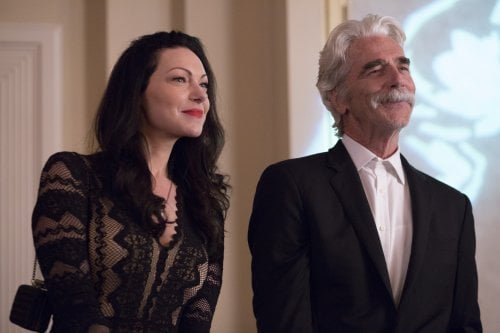 Lee Hayden (Sam Elliott) was once a western star of note. But, that was 40 years ago and, now, he is doing voiceover commercials for a barbecue sauce company. The best his agent can do is to get him a lifetime achievement award from the Western Preservation and Appreciation Society. He reluctantly agrees and, to his amazement, a video of the event goes viral in “The Hero.”

Lee Hayden (Sam Elliott), once a famous Western star, now mostly makes do with commercial vocal work, his agent informing him of a lifetime achievement award offer, but no new scripts. When he's hit with a distressing biopsy diagnosis, he ignores his followup oncology call, telling his pot dealer buddy Jeremy (Nick Offerman) he's starting a new movie to explain away his pensiveness. But when Jeremy introduces him to Charlotte (Laura Prepon, TV's 'That '70s Show'), Lee is intrigued by the younger woman, deciding to go to that awards banquet after all with her as his date to celebrate "The Hero." Cowriter (with Marc Basch)/director Brett Haley ("I'll See You in My Dreams") looks at aging and romance from the male perspective in his second film, which unfortunately is a far more formulaic, cliche-ridden outing than his first. Not content with having their Marlboro man contemplating mortality, the filmmakers also stuff in the estranged daughter plotline, Krysten Ritter's (TV's 'Jessica Jones') scenes as Lucy Hayden stopping the film dead in its tracks. But Elliott is always worth watching and Prepon proves a mischievous romantic foil, the two giddy with joy (and Ecstasy) meeting Lee's fans at Gary Babcock's ('Barney Miller's' Max Gail) low rent gathering of the Western Historical and Preservation Society. The filmmakers celebrate Elliott's voice in their bookending recording sessions, the actor's honeyed tobacco purr seductively touting Lone Star Barbecue Sauce. The man we meet is a slowed-down loner, content to spend days puffing weed and ordering takeout with Jeremy. His diagnosis spurs him to reach out to Lucy, who coldly agrees to a dinner date (which, wait for it...he will forget!). It is a woman of a similar age, the punkish, Edna St. Vincent Millay reciting Charlotte, who instead provides a new lease on life. Lee resists because of their age difference (and his secret illness), but Charlotte is too persuasive. The film's high point is the awards show, Elliott and Prepon so high their happiness spreads like a contagion. While accepting his award, Lee calls up audience member Diane (Patrika Darbo, TV's 'Days of Our Lives'), declaring her the hero and presenting her with his award. A video of his speech goes viral and interest in the one time star sky rockets. The film has a bumpy ride towards its conclusion, including an insensitive, out-of-character stand up routine by Charlotte, but the filmmakers go out on a high note, cheekily swelling hold music for their hopeful finale. Grade:

Sam Elliott is the icon of rugged good looks and deep, gravely voice (and splendid mustache) but is best known for his supporting roles. Director Brett Haley and co-scribe Marc Basch change that with a moving character study of a man, once famous, who nears the end of his life. Sam Elliott brings that character to life in Lee Hayden. Lee spends most his time smoking pot with his old acting buddy, Jeremy (Nick Offerman), and hanging out. During one of his frequent visits to his pal, he meets Charlotte (Laura Prepon), a striking beauty who is Lee’s kindred spirit. She agrees to attend the award ceremony with Lee and he performs an act of chivalry, giving the award to a fan in the audience. The act is videoed and, 2,000,000 views later, Lee becomes hot property (sort of) again. “The Hero” belongs to Sam Elliott in his full bodied performance as the once famous star who tries to find a new life, even as the end draws near. His supporting cast, though small, helps flesh out the film and their characters. Nick Offerman gives the appropriate laid back humor as Lee’s former-co-star-turned-pot-dealer best buddy Jeremy. I had a problem, at first, with Laura Prepon as the possible love interest for Lee – too young. But, the actress makes the role her own and by the end, I was on her side. Krysten Ritter, as Lee’s long estranged daughter, fares less well in a two-dimension role. Katherine Ross, in large glasses, is hidden in the background as Lee’s ex, Val I compared myself, to my wife Laura, with Sam Elliott. We both have deep voices, mustaches (mine with beard) and both of us are darned good looking. She disagreed with the comparison.