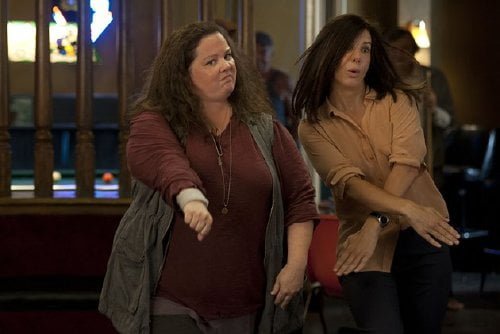 Special Agent Sarah Ashburn (Sandra Bullock) has solved the most cases in the FBI's New York office, is super smart, yearning for a promotion and annoying as hell to her coworkers, so her boss Hale (Demian Bichir, "A Better Life") assigns her to a case of nasty drug-related murders in Boston. There, inner city cop Shannon Mullins (Melissa McCarthy) has just taken down low level drug dealer Rojas (Spoken Reasons) and isn't about to give her case to any hoity toity interloper. But Ashburn's brains prove a good pairing with Mullins' brawn and the two team up as "The Heat."

A wafer thin plot (written by 'Parks and Recreation's' Katie Dippold) is just an excuse for Sandy and Melissa to riff off one another in a mismatched female buddy comedy and it's as good excuse as any. Although one wishes the case itself required a bit more of the uncanny sleuthing initially exhibited by Ashburn, Dippold's concentrated on character dynamics and director Paul Feig ("Bridesmaids") lets his actors rip. McCarthy is much funnier here than she was in "Bridesmaids" (I hated, hated, *hated* that character) and has genuine chemistry with Bullock, whose comedy gets lower down and dirtier than anything we've seen from her before. Both law officers are loners. Ashburn's so friendless, she's taken to smuggling in her neighbor's cat for company. Mullins, meanwhile, is persona non grata with her parents and three brothers for having thrown her fourth, Jason (Michael Rapaport, "Zebrahead," "Mighty Aphrodite"), into jail to get him clean. If Hale's trying to make Sarah prove she can play with others, Mullins' Captain Woods (Tom Wilson, "The Informant!") largely takes cover (McCarthy's insubordinate improv to her colleagues with 'Have you seen the captain's balls?' is one of the film's highlights). Once Ashburn's acknowledged Mullins' street knowledge just might be useful, the two quickly work their way up from Rojas towards their target - Larkin - but while only the first couple of encounters prove ripe for comedy, the two DEA agents, 'The Albino' (Dan Bakkedahl, HBO's 'Veep') and Adam (SNL's Taran Killam) they tangle with are ripe for for a whole lot more. Then there's Mullins' family - Mrs. Mullins (SNL's Jane Curtin) (first seen flipping off her daughter in a drive-by), Mr. Mullins (Michael Tucci) (a collector of Jesus-themed Boston sports paintings), brothers Mark (Bill Burr, " Stand Up Guys"), Michael (Nathan Corddry, TV's 'Childrens' Hospital') and Peter (New Kids on the Block's Joey McIntyre), whose girlfriend Gina (Jessica Chaffin, TV's 'Ronna & Beverly') is hated by all. The criminals provide no Boston flavor, but this clan makes up for it ('Are you a naac?'). Unlike "Bridesmaids," this movie's gross-out humor is genuinely funny, driven from Mullins' foul lifestyle and Ashburn's competitive nature. Side by side comparisons of their sexiness (uptight Bullock's inability to flirt vs. McCarthy's stream of yearning one night stands), physicality (dance moves!), dress (Republican preppie vs. street hood) and ability to hold liquor make them a true odd couple. Bullock gets us right into her head space with the smug smile that accompanies her first arrest, but she casts her good girl overachiever with a vulnerability that keeps her likable, just as McCarthy's take-no-prisoner's toughness shields a genuine heart. The film was shot in Boston, utilizing the old Boston Herald facility and a closed police station and the film's coda suggests the filmmakers may return. This is a potential franchise ripe with possibilities if the filmmakers turn to more Boston-centric crime.