The Heart of the Game 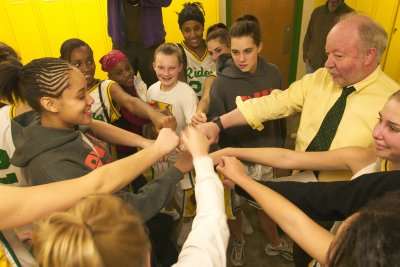 Bill Resler teaches tax law at a local college but his real passion is coaching Seattle’s Roosevelt Roughriders, the girls’ basketball team at that high school an his unorthodox training ideas and methods propel his team to be a real contender. When he recruits a talented student, Darnellia Russell, the young athlete becomes a catalyst for victory and “The Heart of the Game.”

This is a sports documentary in three parts. The first is about Coach Resler who takes on the task of training the Roughriders in ways not seen in high school sports (heck, not even in pro sports). He has a radically unconventional method to prepare his girls for the basketball season: instead of the usual offensive and defensive teams, he opts to train his players for defense only, pushing them to an endurance level not seen before. His unusual technique makes his team faster, stronger and more aggressive than any of the competition. Ever year, he gives them a different name, like Pack of Wolves and Pride of Lions, to inspire them to play hard and win. “Eat the moose” (the other team) is just one of his sayings to inspire his players. Resler is the kind of coach who lets all of his girls play, regardless of the score on the board, and have fun in the process. Part two follows the Roughriders and its members through each successive (and successful) basketball season. The rigors that the girls endure show their love for the game and loyalty to their coach. They get what he is trying to do and appreciate his zeal. These are tough, capable athletes that give credence to the idea that women may well soon compete with men at the game. Plus, their loyalty and love for Resler is shown with good-natured fun – at one point, they paper his office with tax forms; at another, they playfully toilet paper his home. Part three, the heart of “The Heart of the Game,” is Darnellia Russell. Recruited by Resler when she was a freshman, the youngster refused to transfer from inner city Garfield High to the predominantly white and privileged Roosevelt – Darnellia tells her friends that being around so many white people makes her uncomfortable. Her mother and her middle school coach convince her to take the transfer and the girl’s natural playing ability instantly makes her a star on the team. The Roughriders become a Seattle dynasty and a real contender for state champion. But, Darnellia’s life isn’t all beer and skittles. She skips classes and her GPA dips below 2.0, disqualifying her from playing. She drops out of school, comes back and is, again, disqualified from playing because she quit. What should have been an ensured future of sports scholarships and WNBA offers becomes doubtful for the talented Darnellia. First time documaker Ward Serrill spent seven years filming the material for “The Heart of the Game.” He let the cameras roll and let the stories unfold before putting together a femme basketball documentary that rivals “Hoop Dreams” in its complexity, craftsmanship and simple love for the game. Serrill follows several seasons of the Roughriders’ games, focusing on the ongoing rivalry between the Roosevelt and Garfield high schools, showing the excitement of high school basketball and the dedication of its femme players. Bill Resler is a fascinating subject, as are the Roughriders (not just Darnellia) as they embrace their coach’s unusual training program with both determination and pleasure. The games are, across the board, exciting to watch and Ward Serrill’s camerawork and skilled editing add to this excitement. “The Heart of the Game” may have been seven years in the making but you don’t get the feeling of ponderousness as the years tick by. Every second of the film is fresh and fast without an ounce of fat, making it a first class documentary. If you are a sports fan, a docu buff or just like a good, inspirational movie, then this is one for you.