The Heart of Me 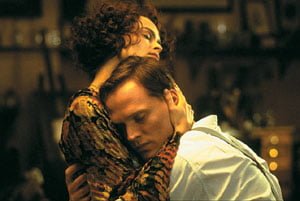 `And throughout all Eternity I forgive you, you forgive me. As 1000 our dear Redeemer said: "This the Wine, and this the Bread."' William Blake

After the death of their father, Dinah (Helena Bonham Carter, "Novocaine") stays briefly at her sister Madeline's (Olivia Williams, "The Sixth Sense") London townhouse, frustrating her sister's sense of decorum while delighting her nephew Anthony (Luke Newberry) and casting a sexual spell on her brother-in-law Rickie (Paul Bettany, "A Beautiful Mind") in Thaddeus O'Sullivan's pre and post WWII melodrama "The Heart of Me." This adaptation of the 1953 novel "The Echoing Grove" by its author Rosamond Lehmann and Lucinda Coxon would have made a great vehicle for Bette Davis in the 1940s. While it sometimes overplays the melodrama and undercuts background information, the three leads, particularly Bettany and Williams, convincingly flesh out their characters amidst art director Karen Wakefield's ("What a Girl Wants") realistic British period sets. The opening 1934 funeral of Dinah and Madeline's father serves three purposes. Firstly it marks the contrast between two sisters - the reserved, socially responsible Madeline and the bohemian, free-spirited Dinah. Their mother, Mrs. Burkett (Eleanor Bron, "The Little Princess"), ironically tells Madeline's husband Rickie that her husband had always been proud of Madeline, but it was Dinah who made him happy. Secondly, it is the first of three deaths of men the two sisters will love in a story that is itself a triangle. Thirdly, it sets a somber tone for the sex and death imbued family tragedy about to unfold. Madeline, sensing danger in the presence of her sister, quickly plots an engagement to a staid friend who 'will be kind to her,' but her success sparks exactly what she fears, driving Rickie to Dinah's bedroom to dissuade her from a loveless marriage. Shortly thereafter, Madeline will find herself alone at her own jam-packed New Year's Eve party. At the stroke of midnight, rose petals cascade from the ceiling like a veil of bloody tears as Madeline's husband and sister have a tumble in the bushes outdoors. The affair continues through Dinah's pregnancy, which she covers up by moving to the seaside with her roommate Bridie (Alison Reid), a capable midwife and possible unrequited lover who eventually spills the beans to Madeline via letter (a move which is never explained from a character who disappears from the film). Rickie takes the outrageous action of moving in with the woman he loves, but his ill health and a meddling mother-in-law tragically separate the lovers. Much of the story is relayed in flashback from a 1946 reconciliation lunch at Madeline's which forces the sisters to examine their past. While the coda provides another neat generational symbolic link and continues the theme of forgiveness from Dinah's favorite Blake poem, its abruptness seems forced. Williams does a fine job of conveying the roiling emotions contained within her rigid, passionless bearing. Her eyes show reserved concern, then glint with resentment and jealousy. She carries the life long frustration of the less favored child. Bettany is also strong as a proper family man who is brought to life only to be squelched. He teeters on a tightrope stretched between maintaining respectability and giving way to passion. Bonham Carter, who has played this type of role before, is cast well as a woman before her time. However she is also largely responsible for spiking the melodrama, particularly in a confrontational reunion scene with Rickie where she arrives with a vampiric presence from a crowded street and departs with yipping shrieks from a stately restaurant. Bonham Carter also could have shaded the character a little more deeply, so that Dinah didn't appear so self-centered. O'Sullivan has a good sense of visual cues. After Rickie returns to his wife after making love with her sister, he splashes water on his face in front of a mirror illuminated by three lamps arranged triangularly. Dinah makes up her face like a clown to amuse her nephew, foreshadowing a more ghastly image when Madeline removes her party makeup, smearing blood red lipstick across her mouth. Original music by Nicholas Hooper plays to the period and subject without being overt. "The Heart of Me" is an old-fashioned women's weepie featuring a triangle more doomed than that of "The Age of Innocence" set in the period of "The End of the Affair."