The Haunting in Connecticut 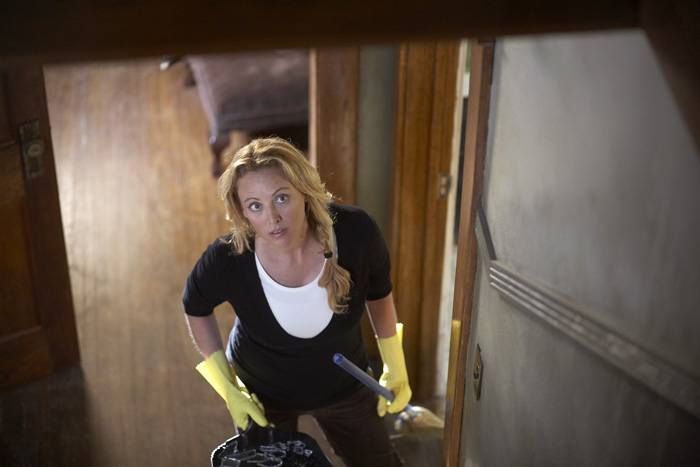 'One bright day in the middle of the night, Two dead boys got up to fight...' Sara Campbell (Virginia Madsen, "Sideways") has been driving her teenage son Matt (Kyle Gallner, episodes of "Big Love," "CSI: NY," "The Shield") out of state for cancer treatments, but the eight hour trips are wearing them both down. After talking to her husband, Sara looks for a rental near St. Michael's Hospital. Construction contractor dad Peter (Martin Donovan, "Saved!," "The Quiet") will commute on weekends, but his wife, Matt, younger siblings Billy (Ty Wood) and Mary (Sophi Knight) and niece Wendy (Amanda Crew, "Sex Drive") pack up their belongings to move into what they do not yet know is a former funeral parlor. Their experiences there will become known as "The Haunting in Connecticut."

Supposedly based on a 'true' story that happened to the Snedeker family on Meriden Ave. in Southington, Connecticut, "The Haunting in Connecticut" story smacks of all the same serious doubts as the Amityville Horror, including the Warrens, the same team of 'psychic' investigators, and a book author who claims he was instructed to make things up and make it scary. That said, screenwriters Adam Simon ("Brain Dead") and Tim Metcalfe ("Kalifornia") couldn't even leave that well enough alone, and have whipped up 'origins' for the hauntings' raison d'etre that escalate into a risible climax. But despite director Peter Cornwell's use of cliched horror gags and an abrasive sound mix which makes even dialogue sound like clanging chains, this haunted house entry is at least better than most of the other abysmal horror offerings of 2009. But not by much. The film's opening title sequence is promising, featuring period sepia toned stills of the dead, a common early photography practice that is now viewed as morbid (a boy with his deceased brother leaning on his shoulder, parents each holding a dead child in their laps). Then we're catapulted into June of 1987, where Matt is suffering the effects of cancer treatment on one of the Campbells' long commutes. Sara pulls over as a friendly looking local is literally banging a 'for rent' sign into the ground in front of a rambling colonial and is immediately sold on the place. When she asks what the catch is, she's told the place 'has a history.' Of course, Matt chooses a basement room as his bedroom - one with an interior room with fogged windows which is locked. He immediately begins to see things, including blood on the floor where is mother is mopping. We quickly learn that hallucinations are a possible side effect of Matt's experimental treatment, which at least provides a reason for his keeping quiet about them. There are lots of mirrors around for figures to be seen by the audience if not the people in the room and Mary, the youngest, cheerfully accepts that if the lights go out and she asks for them to be put back on and they are, it's situation normal. This group plays a lot of hide and seek in order to put Billy in the coffin lift and Mary in the attic, where an accidental run in with rotting floor boards uncovers a box which holds much of that 'history' Sara had been told of. Matt's cousin Wendy makes a trip to the local library and returns in order to narrate the story of mortician Ramsey Aickman (John Bluethner) and his assistant Jonah (Erik J. Berg), the boy who seems to be possessing Matt more and more (resulting in Gallner being made up to give "Twilight's" Robert Pattinson a run for his money). Aickman apparently practiced necromancy (the 'true' story just hints at necrophilia) in order to wow seance audiences with real ectoplasm emerging from Jonah's mouth like organic smoke. In addition to jumping on the Amityville gravy train, "Connecticut's" filmmakers have added dashes of "The Exorcist" (an early cross cutting of an MRI, a helpful priest with a heart condition), "The Shining" (an alcoholic dad who threatens his family when drunk), "The Messengers" (lots of shadowy birds), and "Poltergeist" (crashing dishes and furniture pyramids). Technical aspects and the story's progression are rough around the edges. The cast is better than the material (why isn't Martin Donovan getting better work than this?) and Madsen is convincing as a dedicated mom, but even she goes off the rails when required to walk into a burning building and announce 'I'm here!' as flaming rafters fall to the floor. Elias Koteas ("Zodiac," "Two Lovers") nicely downplays the character of Reverend Popescu. "The Haunting in Connecticut" has some decent creepy house scares, but it reeks of scamming the gullible out of their hard earned cash. "The Amityville Horror" already spawned several sequels - did it really need a spinoff too?