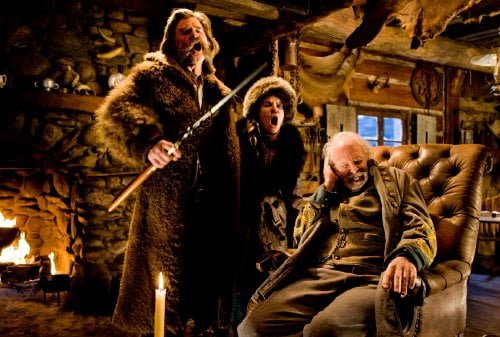 Some time after the Civil War. A stagecoach hurtles across the snowy mountain landscape of Wyoming with a blizzard hard on its wheels. A lone man, Major Marquis Warren (Samuel L. Jackson), hails the coach for a ride. The inhabitants, John “The Hangman” Ruth and his prisoner, Daisy Domergue (Jennifer Jason Leigh), reluctantly bring the major, a bounty hunter hauling the bodies of most wanted, on board. They pick up another lone straggler, Sheriff Chris Mannix (Walton Goggins) but are forced to hold up at Minnie’s Haberdashery, where others also weather out the storm, but nothing and no one is as it seems in “The Hateful Eight.”

On the snowy outskirts of Red Rock, Wyoming where a blizzard is beginning to flex its muscles, former union soldier Major Marquis Warren (Samuel L. Jackson) flags down a stagecoach. Its occupant, bounty hunter John 'The Hangman' Ruth (Kurt Russell), is reluctant to share his ride due to the high price due on his handcuffed fugitive Daisy Domergue (Jennifer Jason Leigh), but he remembers meeting Warren and agrees to have him board for a second look at the man's personal letter from Lincoln. Further along they pick up another stranded man, Chris Mannix (Walton Goggins, "American Ultra"), a former southern renegade who claims to be Red Rock's new sheriff. But the storm proves too powerful and the coach stops for shelter at Minnie's Haberdashery where four more men - but not Minnie nor Sweet Dave - will add up to "The Hateful Eight." 'The 8th film by Quentin Tarantino,' announces the opening credits of Writer/director Quentin Tarantino's retro Ultra Panavision 70mm Agatha Christie Western. At 187 minutes, the roadshow edition, which includes an Overture, 12 minute Intermission and six additional minutes, flies by, Tarantino carving his film into six chapters. The first four slowly build tension as the seven men and one wild woman suss each other out, Major Warren acting as this film's sleuth. There are divides across north and south, white and black, American and foreigner, law upholders and law breakers. The fifth chapter catches the audience up on what happened before the stagecoach arrived at Minnie's while the final one presents a strange bedfellows epilogue. Tarantino wanted to create an event and he's done so in signature style. Trust is already an issue in Chapter One, with Ruth suspicious that Warren, who has bounty bodies of his own to store on the coach's roof, is after the $10K on Daisy's head (Ruth likes to deliver his goods alive so as not to cheat the hangman). Daisy, feisty and almost feral, doesn't like the color of Warren's skin ('Darkies don't like to be called that no more. They find it offensive,' cautions Ruth). Chapter Two, 'Son of a Bum,' folds Mannix into the mix and no one's buying his story, Warren in particular noting his Civil War past as one of his father's Mannix's Marauders. Mannix counters by recognizing Warren as the wanted Yankee responsible for burning down a barracks housing 47 rookie soldiers. Chapter 3 finds O.B. (James Parks, "Django Unchained") pulling up to Minnie's, which Warren is surprised to find has been left under the charge of Bob (Demian Bichir, "A Better Life," "The Heat"), a Mexican who tells him Minnie's gone to visit her mother. Inside are three more men. Englishman Oswaldo Mobray (Tim Roth) introduces himself as Red Rock's hangman. Confederate General Sandy Smithers (Bruce Dern) sits in a chair by the fire. In a corner quietly writing is Joe Gage (Michael Madsen), a cowboy. Two of the men go out to set guiding stakes from the building to the outhouse, stable and back while Warren heads out to care for the horses with Bob. He asks a lot of questions, his eyes observing everything. It might seem an odd choice to go all Cineramascope on a movie which largely takes place indoors, but Tarantino and director of photography Robert Richardson ("Inglourious Basterds," "Hugo") use the expanded frame wisely, allowing us to keep an eye on things outside the main action (Richardson's outdoor framing is simply beautiful, a shot out of Minnie's battered door towards those storm stakes being set harkening back to classic widescreen Westerns). In addition to the anamorphic lenses which had to be restored (some used for "Ben Hur!"), new 2K foot mags were created for the film, allowing Tarantino to shoot longer takes than the format previously allowed. This is a painstaking production, from the artful production design and set decoration to costume, hair and makeup. Ennio Morricone's unexpected score is geared more towards dark, doom-laden suspense with no whiff of his famed Western motifs. Tarantino's screenplay is full of classic nuggets, often laugh-out-loud funny. Objects like jelly beans, a coffee pot and that letter weave in and out of the story, their meaning mutating as the story unfolds. If, after all is revealed, reflection works some holes into his set up, it's hard to quibble, given how intricately the whole has otherwise been orchestrated. There are even two musical interludes worked in, both lending subtext, one sleight of hand. No women's feet are on display, but Apple tobacco is front and center and bloody violence is par for the course. The cast is exceptional as well, Jackson leading a fine ensemble. Russell and Jason Leigh, handcuffed together for most of the running time, are especially great, so choreographed are their movements, so slapstick is the violence between the two. (Jason Leigh also sings here, as she does in the upcoming "Anomalisa.") The cast also includes "DJango Unchained's" Dana Guorrier as Minnie, "Grindhouse's" Zoë Bell as Six-Horse Judy and Tarantino newbie Channing Tatum. With "The Hateful Eight," Tarantino has updated the Western for modern sensibilities with its underlying theme of hatred bred of racism, political differences and greed while honoring the glory days of both the genre and the cinema experience. Grade:

I have to admit, while I am aware of the famous wit of Oscar, his play, “ The Importance of Being Earnest,” - which was adapted as a 1952 film that is one of my favorites with its droll Wilde wittiness and tongue-in-cheek societal barbs – was about it for knowing his work. As to the life of this now-honored author, playwright and humorist, I knew next to nothing – aside from his flamboyance – of that life, particularly his sad and tragic end. Rupert Everett wears three hats in this somber, funny life tragedy as star (though he embeds his name deep down the acting credits at the end of the film), writer and director in what is a loving homage to Oscar Wilde. He takes what I once thought about the bon vivant author – the toast of London and international celebrity – and shows us the narrow minded cruelty of Victorian society that that ended in Wilde’s ruin, and untimely death at age 46. Director Everett is fortunate to have a screenplay that tells an honest story about Wilde’s last years as a destitute outcast from a society and world that once adored him. Everett the writer does a superb job in depicting Oscar’s death and the turbulent events that led to it. Everett the actor takes his director’s guidance and author’s passion and creates a fully developed funny, sad man who meant no harm in his love for life. Wilde gave so much of himself to the world that his story deserves to be told and the Everett triumvirate does it an honor. While I was watching this artistically-veiled treatise on LGBTQ rights and respect, I thought of Truman Capote. Like Wilde, he was a respected author with a biting wit and the same kind of flamboyance – and gay – but he was able to thrive where Oscar served two years at hard labor – for being gay.