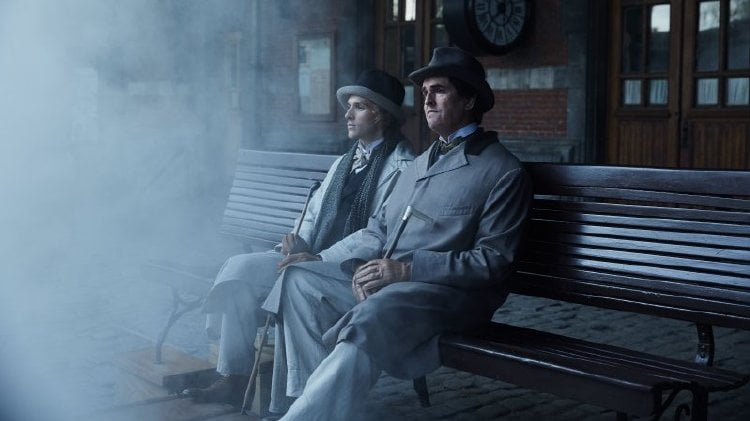 Oscar Wilde (Rupert Everett) was once the toast of the theater and social world of Victorian-age London. But, when he tried to sue for defamation of his “flamboyant” behavior and character, it led to the dramatic and permanent fall from grace for “The Happy Prince.”

At the height of his fame as London's preeminent playwright, Oscar Wilde (Rupert Everett, "My Best Friend's Wedding") reads one of his own fairy tales to his beautiful boys Cyril and Vyvyan. But his infatuation with Alfred 'Bosie' Douglas (Colin Morgan, BBCA's 'Humans') drew the ire of the man's father, Lord Douglas. Wilde was convicted of 'gross indecency with men' ('The love that dare not speak its name') and sentenced to two years hard labor. Upon his release in 1897, Wilde, his health debilitated, left for France where he would die, destitute, three years later. But he had friends, both from his London literary circle and urchins on the street, whom he would continue to regale with his tale of "The Happy Prince." Writer/director/star Rupert Everett makes his directorial debut with his passion project, having had a career long affinity with Oscar Wilde. Everett has starred in two Wilde adaptations, "The Importance of Being Ernest" and "An Ideal Husband," in addition to playing the man on the London stage. His performance here, aided by makeup and prosthetics, is a complex mixture of bravado and defeat, the still sparkling wit recognizing his weaknesses, yet continuing to indulge them to his own detriment. Everett's structured his film as a series of memories held loosely together by his various recitations of his fairy tale, his death bed in a cramped Parisian rented room set like a stage play. It mostly works, although those unfamiliar with Wilde may not recognize just what was lost, the story weighted towards the man's downfall. It is also fair to call the film a love triangle, the spoiled and disloyal Bosie contrasted against Wilde's literary agent and sometime lover Robbie Ross (newcomer Edwin Thomas, excellent) whose truer affections were returned with far less passion. Upon his release from prison, Wilde immediately left London for Dieppe on the northern coast of France where he was feted in style under the assumed name Sebastian Melmoth by old friends including author Reggie Turner (Colin Firth) and Robbie. Wilde declared his intention to reconcile with his wife, Constance (Emily Watson), who was providing him a financial allowance. But Wilde's penchant for the finer things in life and his identity discovered by a bullying mob of young men who chase him through the streets soon had him on the run. To everyone's dismay, Wilde reunited with Bosie in Rouen and Bosie convinced him to 'run away' to Naples where both men's finances were soon cut off. Wilde returned to Paris a broken man, drinking away his little money in clubs or spending it on male prostitutes. None of this is told in a linear fashion, but Everett never loses us. The beginning and end of his exile are dominated by Reggie and Robbie, the former calling in a priest, Father Dunne (Tom Wilkinson), when the end was apparent. We hear the end of 'The Happy Prince' as told to street urchin brothers Jean (Benjamin Voisin) and Leon (Matteo Salamone) in a stunning reversal from its beginning, the tale of a sparrow redistributing the wealth adorning a prince's statue, then dying of its exertions, achieving more power as it parallels Wilde's life. Bosie, whose only admirable quality is his physical beauty, is well played by Morgan, their last fling the midsection of Wilde's exile. The film was shot on location throughout Europe, but despite such gorgeous locations as the coast of Naples, the film's most striking scene takes place in one of its drabbest spots, a gray railway platform where Wilde, in prisoner's garb, is jeered and spat upon as he sits, shackled, awaiting transport to the Reading Gaol, an experience Wilde described as his lowest. The film's most humorous scene takes place in Naples, where Wilde and Bosie host an all male bacchanal including Bosie's latest lover, local waiter Felice (Antonio Spagnulo). In bursts Felice's mother (Franca Abategiovanni), his young bride and newborn child in tow, looking for 'harlots,' then leaving quite satisfied when she fails to find any. The film also features Anna Chancellor as Mrs. Arbuthnott, a London theater patron distraught by Wilde's condition in Paris, and Béatrice Dalle ("Betty Blue," "Inside") as a club owner who accepts a singing performance from Wilde in payment of his bar tab. Grade:

I have to admit, while I am aware of the famous wit of Oscar, his play, “ The Importance of Being Earnest,” - which was adapted as a 1952 film that is one of my favorites with its droll Wilde wittiness and tongue-in-cheek societal barbs – was about it for knowing his work. As to the life of this now-honored author, playwright and humorist, I knew next to nothing – aside from his flamboyance – of that life, particularly his sad and tragic end. Rupert Everett wears three hats in this somber, funny life tragedy as star (though he embeds his name deep down the acting credits at the end of the film), writer and director in what is a loving homage to Oscar Wilde. He takes what I once thought about the bon vivant author – the toast of London and international celebrity – and shows us the narrow minded cruelty of Victorian society that that ended in Wilde’s ruin, and untimely death at age 46. Director Everett is fortunate to have a screenplay that tells an honest story about Wilde’s last years as a destitute outcast from a society and world that once adored him. Everett the writer does a superb job in depicting Oscar’s death and the turbulent events that led to it. Everett the actor takes his director’s guidance and author’s passion and creates a fully developed funny, sad man who meant no harm in his love for life. Wilde gave so much of himself to the world that his story deserves to be told and the Everett triumvirate does it an honor. While I was watching this artistically-veiled treatise on LGBTQ rights and respect, I thought of Truman Capote. Like Wilde, he was a respected author with a biting wit and the same kind of flamboyance – and gay – but he was able to thrive where Oscar served two years at hard labor – for being gay.