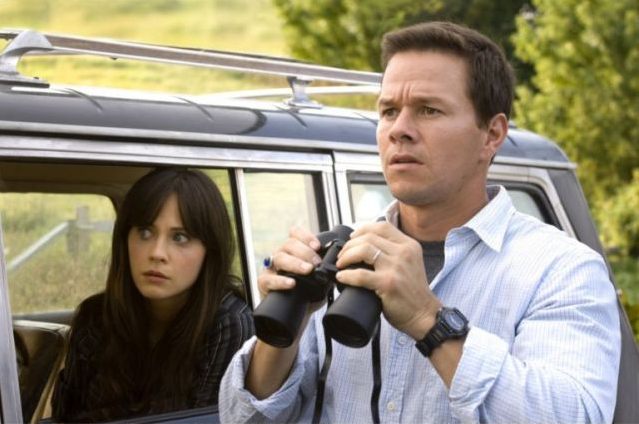 News reports of strange deaths begin filtering in. Soon, urban centers are in crisis and Philadelphia high school science teacher Elliot Moore (Mark Wahlberg, "Invincible," "The Departed") decides to run, along with his wife Alma (Zooey Deschanel, "Elf," "The Assassination of Jesse James by the Coward Robert Ford") and math teach buddy Julian (John Leguizamo, "George A. Romero's Land of the Dead," "Love in the Time of Cholera") and his 8-year-old daughter Jess (Ashlyn Sanchez, "Crash"). It soon becomes evident that humankind is reacting to something which is threatening its very survival and Elliot thinks terrorists have nothing to do with "The Happening."

There was so much talk after the lazy retread that was "The Hangover Part II" about how this one was going to be different, cowriter (with "II's" Craig Mazin)/director Todd Phillips seemingly intent on sending off these characters in some semblance of style. But what he's given us, while not following the same playbook of the first two, is an equally lazy, unfunny slog that fails to even indulge in the raunchy excesses these guys are known for. Even the epilogue is a letdown, the photographic 'outtakes' replaced with a sentimental (for the cast at least) dissolve montage of the wolf pack (sans fourth banana Bartha) walking down corridors. (I understand there is a visual gag at the very end of the credits, but I couldn't get out of the theater fast enough.) A prologue sets us in a Thai prison riot perhaps engineered for Leslie Chow (Ken Jeong) to make his escape in a watery blast of obvious CGI. The much-ballyhooed giraffe decapitation scene follows and it would be disturbing if it were the least bit convincing. Alan's yen for an exotic pet results in a 'highway massacre' ripped right out of a "Final Destination" movie and it is this than causes dear old dad (Jeffrey Tambor) to suffer a fatal heart attack. Convinced by the outpouring of love from his buddies, Alan and the gang set off to get him restabilized (was he ever?) and find themselves run off the road by Marshall's (John Goodman) gang of goons, including 'Black Doug,' (Mike Epps), the guy who sold those roofies to Alan so long ago. Seems Chow stole 21 million in gold bars from Marshall and the wolf pack are the only link to get him back or white Doug gets it. And so follows a series of inept break ins and seesawing allegiances. The script is so sloppy, Marshall declares no one knows where Chow is even though he claims the man stowed away on a cargo container. Chow has knowledge of things that make sense in his version but don't when the truth comes out. Characters like Heather Graham's Jade are trotted out with no payoff and while Black Doug has one, he doesn't deserve it. Grant Holmquist as the now grown baby, Tyler, is so seriously intense he could have an entire movie built around him, just not this one. Galifianakis's weird attachment to Phil is mildly amusing and he's well paired in one bizarre sexual overture to Melissa McCarthy's pawn store owner, but Cooper's delivering on a contract and Ed Helms loses out on an original song performance. Leong's schtick wears thin very quickly and any attempt by the filmmakers to equate his coked out mania with Alan's unmedicated lunacy as a basis of friendship falls flat. Goodman merely barks, a wasted opportunity. Where's Mike Tyson when you need him? "The Hangover Part III" has absolutely no respect for its audience. The first film surprised with its exuberant excess, but no amount of fighting cocks makes this one fly.