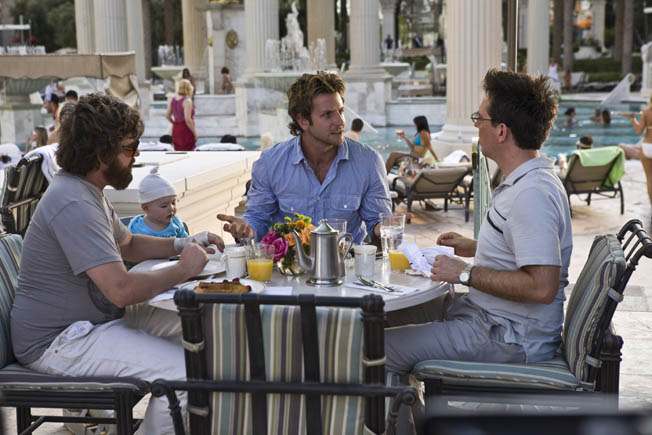 When in Vegas for Doug's (Justin Bartha, "National Treasure: Book of Secrets") bachelor party, groomsmen Phil Wenneck (Bradley Cooper, "Wedding Crashers"), Stu Price (Ed Helms, TV's "The Office") and Alan Garner (Zach Galifianakis, "Into the Wild") lose the husband-to-be and must try and retrace their steps from the evening before's drunken revelry while nursing "The Hangover."

Director Todd Phillips ("Old School," "School for Scoundrels") ups the ante on his "Old School" antics in "The Hangover," a movie which solidifies the comic chops of Cooper and Helms and should make a star out of Galifianakis. Despite their dodgy filmography, screenwriters Jon Lucas & Scott Moore ("Four Christmases," "Ghosts of Girlfriends Past") have given this well cast trio a patched together bunch of comedy cliches with just enough inspired weirdness to let them riff. The three leads and their mismatched chemistry mine more out of this material than the likes of Will Ferrell ever could have. Doug is a good guy, solid marriage material, who is touched that dad-in-law-to-be Sid Garner (Jeffrey Tambor, TV's "Arrested Development") is lending him his silver Mercedes for the trip to Vegas. He also accepts Alan, his bro-in-law-to-be, into his circle despite the fact that the guy is not only weird, but in a suspiciously off way (he has a tendency to forego pants and makes strange asides about not being allowed within 200 ft. of a school). Phil is a school teacher down with his job and family life who nonetheless maintains a devil-may-care attitude (he ransacks students' trip money for Vegas spending cash). Stu is a tightly wound dentist who is planning on asking his bitchy, controlling girlfriend Melissa (Rachael Harris, "License to Wed," "The Soloist") to marry him at Doug's wedding (Doug offers congratulations while Phil tries to talk sense into him). The guys arrive at Caesar's Palace, upgrade to a suite, dress for the night and adjourn to the roof for a toast. The next thing we see is an extravagantly trashed hotel room, complete with a live chicken, Stu on the floor with a missing tooth, pantless Alan discovering a tiger in the bathroom and a baby, dubbed Carlos, in the closet. There is no sign of Doug and his cell phone was left in the room. What to tell his fiance, Tracy (Sasha Barrese)? They decide to begin tracing events via the hospital bracelet Phil is wearing. Then it gets worse - valet parking delivers them a stolen Vegas police car, they discover one of their own married a stripper, Jade (Heather Graham, "Boogie Nights," "From Hell"), and there are two bat-wielding goons after them. Oh, and they stole that tiger from Mike Tyson. Bradley Cooper does the good-looking, suave guy thing. He's the one who thinks it's OK to leave a baby to fend for itself and who regards marriage as the old ball and chain (until the film finally gets to the wedding and he is revealed to be more of a family guy than he'd let on). He's the one who takes charge, the group's leader. Ed Helms is chronically in over his head, a constant worrywart, fearful of Melissa finding out the truth. It is through his eyes (Phillips uses Spike Lee's dolly shot) that we first take in the aftermath. Galifianakis is brilliantly wacked, the guy who seems unsurprised by anything, a kind of sexual stoner. Bartha is the straight man (and to the writers' credit, they provide a big clue as to where he is at the onset, but blend it in with the general looniness so that it isn't obvious). There are many supporting players, but the best are Ken Jeong ("Pineapple Express," "Role Models") as Mr. Chow, a mincing criminal, Rob Riggle ("Step Brothers") and Cleo King ("Pineapple Express") as the police officers who lost their squad car and Mike Tyson as himself. Mike Epps ("Hancock") adds some laid back cool as Black Doug, but he disappears from the action abruptly. The baby does fabulous reaction shots. "The Hangover" is full of crude guy humor and the sort of physical mayhem that would level the average person. It really earns its hard R rating over the closing credits, when we're made privy to the digital shots that document the evening (and which don't give equal weight to what we've already seen). Phillip's film is destined to become a huge earner, but viewers shouldn't expect comedy on the level of last summer's "Pineapple Express" and "Tropic Thunder."